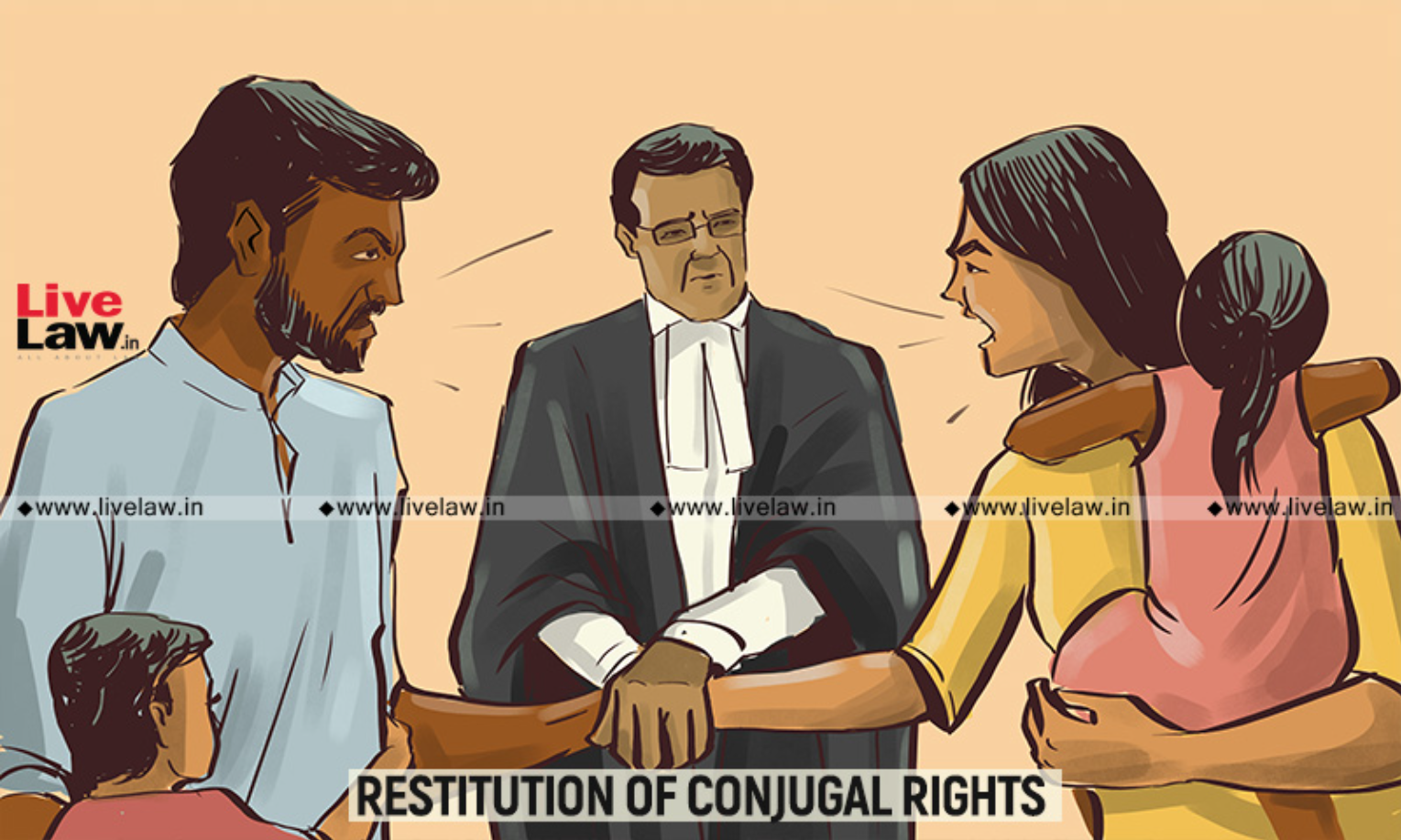 When Claire Virginia Eby wrote her book "Until choice do us part" in 2014[1], the idea was not revolutionary to many. Progressive theories of marriage are leaving behind the ideas of marriage being sacrosanct and are embracing the argument that spouses should be class equals joined by private affection and not public sanction. Amidst the arguments surrounding equality, choice, and...

When Claire Virginia Eby wrote her book "Until choice do us part" in 2014[1], the idea was not revolutionary to many. Progressive theories of marriage are leaving behind the ideas of marriage being sacrosanct and are embracing the argument that spouses should be class equals joined by private affection and not public sanction. Amidst the arguments surrounding equality, choice, and affection in marriage, Indian family law leaves a lot to desire.

One such law, far from the progressive state of the nation, is the restitution of conjugal rights. Enshrined under the Hindu Marriage Act, 1955, Section 9 reads as follows:

The history of the provision bears repeating, especially when we talk about how out of place the provision is in the modern world. Originating from Jewish law, the provision for restitution of conjugal rights reached India and other common law countries through British Rule. The British law treated wives as their husband's chattel hence they were not allowed to leave their husbands.

Women are no longer considered their husbands' chattel in Britain nor India. In the recent judgement of Joseph Shine v Union of India[2], the SC has put great emphasis on right to privacy and bodily autonomy of married women, stating that marriage does not take away their sexual freedom nor choice.

The aforementioned judgement brings up a major issue pertaining to Section 9 of HMA. If everybody is entitled to their bodily autonomy, choice, and right to privacy, how can a court mandate two adults to co-habit if one of them does not wish to do so? How can courts preach autonomy of the body and then turn around and decree otherwise?

Our courts in cases of the past years have taken similar stands. In the case of Sareetha[3], the court held that forcing spouses to cohabit when one of them doesn't wish to do so is infringing upon their constitutional rights, hence this provision must be declared void. But immediately in the following years, the judgement was overruled as the judiciary returned to its rigid ways and held marriage to unattainable sacred standards instead of treating it as a companionship shared between two consenting adults.

The main obstacle to the removal of this provision is the sacrosanct position that marriage holds in the mindsets of the people. And it's high time to take marriage off its pedestal and understand that matrimony is not the institute of marriage but the happiness, freedom, choice, and autonomy of the people in it.

There's no doubt that the law is unconstitutional. In the shadow of the Puttuswamy[4] and Joseph Shine judgements where right to privacy has been declared a right under Article 21, restitution of conjugal rights becomes void.

While we can talk infinitely about the constitutional ramifications and the validity of the section, the real issue is that the enforcement of this provision is often dangerous and sometimes fatal for the spouses concerned.

The Section is gender neutral and it's the only silver lining in an otherwise unwise provision of law. One of the major issues that deserve to be talked about is how the Section contributes to emotional and mental abuse faced by a married individual.

The section states that the onus is on the spouse who withdrew from the others' society to prove that their reason for the same is reasonable. Any form of abuse is hard to prove; bruises fade, sometimes scars heal, and oftentimes the abuser leaves no mark. However, when the same cruelty becomes emotional and/or mental, it becomes close to impossible to prove. How does a wife/husband prove that their spouse is mentally torturing them, starving them, humiliating them? These are hard to prove and leaving the society of the spouse is often the only viable recourse available to them. When a decree for restitution of conjugal rights is given, the aggrieved spouse has to return, because they fear sanction that follows on the heels of ignoring a court order. This is cruel on two levels: a court that promises to protect every citizen forsakes them and decrees them to return to their abuser, curbing their autonomy and their choice. If this is not mental cruelty on all levels, what is? Furthermore, marital rape and rape of men are not criminal offences in India. How do we protect either spouse from this gross violation of their bodies, humiliation, and from the loss of their body autonomy and sexual freedom?

Another pertinent matter to take into consideration is the misuse of this provision as a shield against divorce proceedings and alimony payments. Often times an aggrieved spouse files for divorce from their place of residence and their spouse retaliates by filing for a decree of restitution in their place of residence. Subsequently, transfer petitions derail and prolong the divorce proceeding long enough to inconvenience the aggrieved spouse which is the desired result. A petition for restitution of conjugal rights also allows spouses to weasel out of their obligation to pay alimony. If a couple gets a judicial separation, the spouse becomes entitled to maintenance from the other. This is true for either spouse irrespective of gender. A decree for restitution of conjugal rights becomes a way to get out of this obligation for a year. The spouse agrees to return to the aggrieved spouses' home, fear of sanction being a strong motivator, and the spouse gets out of paying maintenance. If the spouse refuses to comply with the order, then they have until a year before they get judicially separated. Either way, it is a way to get out of the alimony obligations and the provision has been misused for this time and again.

While we talk about gender equality and the gender-neutral quality of the law, women are still at a disadvantage in Indian society and this provision capitalises on it. While we have already talked about the cruelty aspect, in Indian households women suffer more because of dowry. Dowry deaths are a plague on society and women being emotionally and mentally manipulated and tortured for dowry are aplenty. When these wives, tired and broken by cruelty, leave the husband's house, a decree of restitution of conjugal rights is a noose around their necks. How can our courts, that promise to uphold equity, justice, and good conscience, pass a decree that forces a woman teetering on such a delicate edge to return to her place of abuse? How can they pass a decree that could be the difference between her life and death?

When it comes to this Section, our judiciary has taken a shaky stance. Every decade or so, they take a step forward like they did with Shakila Banu[5] and Sareetha judgment but then they immediately take two steps back with judgments like Saroj Rani[6] and Harvinder Kaur[7]. Even the latter judgments do not deny that this section doesn't pass the scrutiny of our constitution but hold on to the baseless, illogical argument of family law falling outside the purview of the Constitution and about marriage being above all else.

It's time for the Indian judiciary and society to shift to more progressive views starting with the progressive theory of marriage. Marriage has never been an untouchable, sacrosanct arena but a foundation upon which two consensual adults form a companionship and offer each other consortium through choice. Marriage is not built upon the ceremonies but upon the autonomy and freedom of two individuals who agree to share them with each other. Marriage was never a holy institution ending with death but with choice. The restitution of conjugal rights strips from a spouse their body autonomy and their choice and in the backdrop of our current legal standpoint vis-à-vis the Joseph Shine judgment and societal standpoint, such a law cannot be allowed to stay. Family law, like all other laws, falls under the purview of Article 13 and is hence, liable to scrutiny under the Constitution and the supposed sanctity of marriage can no longer protect it.

[1] Eby, Clare Virgina. Until Choice Do Us Part: Marriage Reform in the Progressive Era. Chicago: University of Chicgo Press, 2014.