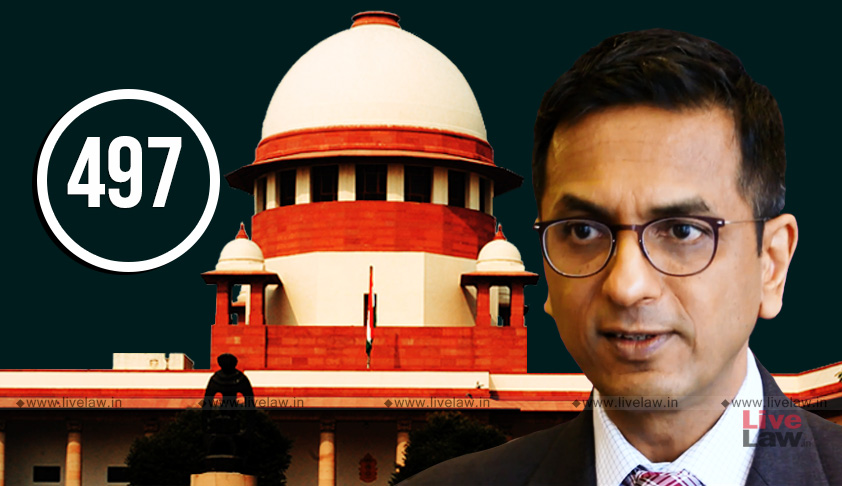 The realities of human existence are too complex to place them in closed categories of right and wrong and to subject all that is considered wrong with the sanctions of penal law, observed Justice Chandrachud. The judgment of Justice Chandrachud in Joseph Shine v Union of India which decriminalized adultery is built upon the themes of 'constitutional morality', 'individual...

The realities of human existence are too complex to place them in closed categories of right and wrong and to subject all that is considered wrong with the sanctions of penal law, observed Justice Chandrachud.

The judgment of Justice Chandrachud in Joseph Shine v Union of India which decriminalized adultery is built upon the themes of 'constitutional morality', 'individual dignity', 'sexual agency', 'gender parity' and 'transformative vision of constitution'. An exquisite evocation of these ideals was seen in Navtej Singh Johar which decriminalised homosexuality. Navtej had a unique judicial approach of contextual reading of law in the background of asymmetries of  power in social order. His judgment in Joseph Shine adopts that approach, to understand the "gendered nature" of Section 497 IPC.

The judgment embarked on a historical investigation of adultery laws across cultures to reach the conclusion that the primary purpose of these laws was to protect the property rights of men,than to protect the sanctity of marriage.Later,ideas and beliefs about sexual morality acquired the force of law in Christian Europe during the Middle Ages.

It was noted that Section 497 treated men and women unequally, as women are not subject to prosecution for adultery,and women cannot prosecute their husbands for adultery. Additionally, if there is “consent or connivance” of the husband of a woman who has committed adultery, no offence can be established. Section 497 is also premised upon sexual stereotypes that view women as being passive and devoid of sexual agency.

Justice Chandrachud also debunked the notion that Section 497 IPC was intended to preserve fidelity between partners, as the provision does not bother about a husband having sex outside marriage with an unmarried woman. The concern of the provision was with sexual intercourse with wife of another man, and hence the provision was majorly addressing the 'harm' felt by the other man. It is all about protecting a husband’s interest in his “exclusive access to his wife’s sexuality”.

"That is because the provision proceeds on the notion that the woman is but a chattel; the property of her husband. The fact that he is engaging in a sexual relationship outside marriage is of no consequence to the law. The woman with whom he is in marriage has no voice of her own, no agency to complain. If the woman who is involved in the sexual act is not married, the law treats it with unconcern. The premise of the law is that if a woman is not the property of a married man, her act would not be deemed to be ‘adulterous’, by definition", held the judgment.

It was also held that "Section 497 is thus founded on the notion that a woman by entering upon marriage loses, so to speak, her voice, autonomy and agency. Manifest arbitrariness is writ large on the provision"

Following the judgment of Justice R F Nariman in  Shayara Bano v Union of India that law can be struck down on grounds of manifest arbitrariness, Section 497 was held to be violating Article 14 of the Constitution of India.

Codification of Patriarchy and Gender Stereotypes.

In Navtej Singh Johar, Justice Chandrachud had held that a provision of law which perpetuates gender stereotypes will be bad for discrimination on grounds of sex, and hence will fall foul of Article 15(1). Same approach was extended here, upon identification of patriarchal and paternalistic undertones of the provision.

Section 497 is based on the understanding that marriage submerges the identity of the woman. It is based on a notion of marital subordination.Underlying Section 497 is a gender stereotype that the infidelity of men is normal, but that of a woman is impermissible.The law on adultery is a codified rule of patriarchy

"Section 497 has a significant social impact on the sexual agency of women. It builds on existing gender stereotypes and bias and further perpetuates them. Cultural stereotypes are more forgiving of a man engaging in sexual relations than a woman. Women then are expected to be chaste before and faithful during marriage. In restricting the sexual agency of women, Section 497 gives legal recognition to socially discriminatory and gender-based norms. Sexual relations for a woman were legally and socially permissible when it was within her marriage. Women who committed adultery or non-marital sex were labeled immoral, shameful, and were criminally condemned".

The condition that adulterous relationship will not be offence if committed with consent or connivance of woman's husband is a telling reflection of the patriarchal assumption underlying the criminal provision: that the husband is the owner of the wife’s sexual agency.

The excemption given to women from punishment under Section 497 IPC was termed an "entrapping cage", as paternalistic in nature, treating women as incapable of autonomy.

"Patriarchy and paternalism are the underpinnings of Section 497", observed the judgment.

"Human sexuality is an essential aspect of identity. Choices in matters of sexuality are reflective of the human desire for expression. Sexuality cannot be construed purely as a physiological attribute. In its associational attributes, it links up with the human desire to be intimate with a person of one’s choice. Sharing of physical intimacies is a reflection of choice. In allowing individuals to make those choices in a consensual sphere, the Constitution acknowledges that even in the most private of zones, the individual must have the ability to make essential decisions. Sexuality cannot be dis-associated from the human personality. For, to be human involves the ability to fulfil sexual desires in the pursuit of happiness. Autonomy in matters of sexuality is thus intrinsic to a dignified human existence. Human dignity both recognises and protects the autonomy of the individual in making sexual choices"

It was held that Section 497 denudes the woman of the ability to make these fundamental choices, in postulating that it is only the man in a marital relationship who can consent to his spouse having sexual intercourse with another. Section 497 disregards the sexual autonomy which every woman possesses as a necessary condition of her existence. Far from being an equal partner in an equal relationship, she is subjugated entirely to the will of her spouse.

"Implicit in seeking to privilege the fidelity of women in a marriage, is the assumption that a woman contracts away her sexual agency when entering a marriage. That a woman, by marriage, consents in advance to sexual relations with her husband or to refrain from sexual relations outside marriage without the permission of her husband is offensive to liberty and dignity. Such a notion has no place in the constitutional order. Sexual autonomy constitutes an inviolable core of the dignity of every individual"

The impact on sexual agency and autonomy violated personal liberties, resulting in infringement of Article 21 of the Constitution of India.

It was held that the section goes against the spirit of the rights-based jurisprudence,which seeks to protect the dignity of an individual and her “intimate personal choices”.

The “organisation of intimate relations” between “consenting adults” is a matter of complete personal choice and falling within the “private protective sphere and realm of individual choice and autonomy”.

In so far as two individuals engage in acts based on consent, the law cannot intervene. Any intrusion in this private sphere would amount to deprivation of autonomy and sexual agency, which every individual is imbued with.

Law Should Relfect Status of Husband & Wife As Equals

The judgment stated that law must reflect the status of husband and wife as equals in a marriage, entitled to the constitutional guarantees of privacy and dignity. Respect for sexual autonomy is founded on the equality between spouses and partners and the recognition by each of them of the dignity of the other.

"Marriage – whether it be a sacrament or contract – does not result in ceding of the autonomy of one spouse to another", he observed.

Justice Chandrachud sounded realistic and empathetic when he said:  "The realities of human existence are too complex to place them in closed categories of right and wrong and to subject all that is considered wrong with the sanctions of penal law".