Plea Of Army For Exemption From RTI: An Approach Devoid Of Merits 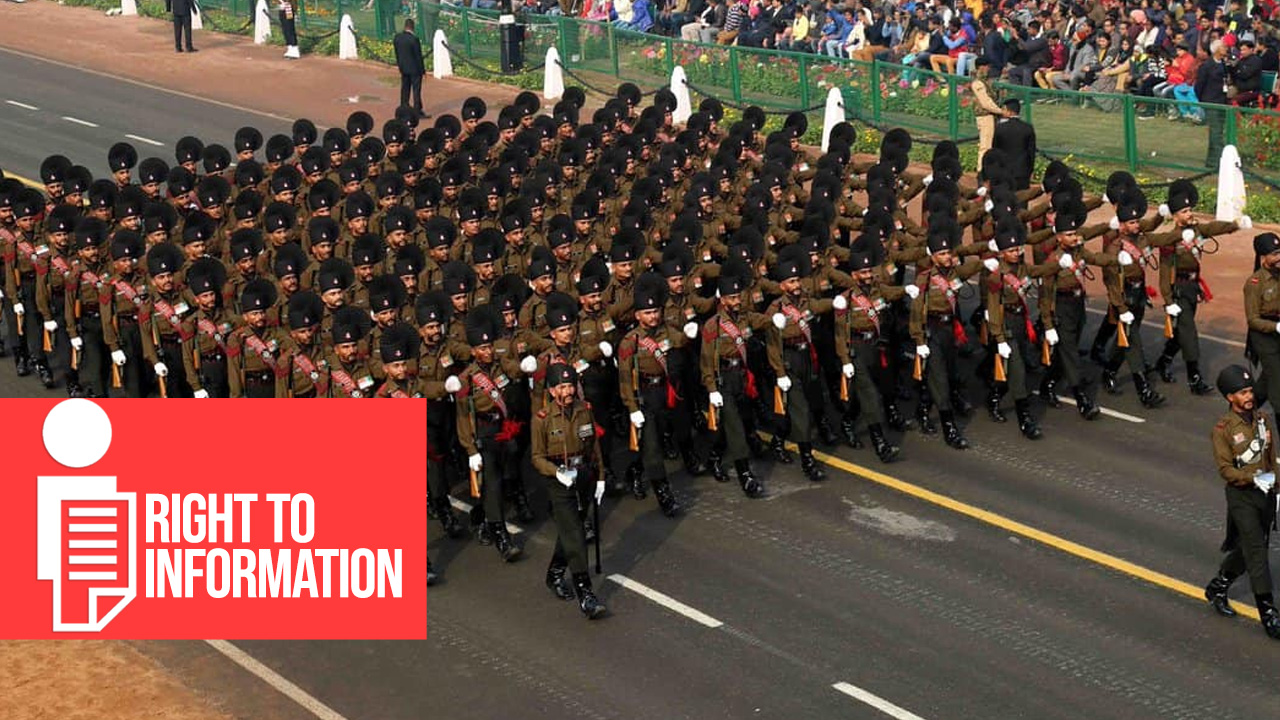 In the landmark judgment of SP Gupta Vs Union of India (1981), Supreme Court of India held, "the concept of open government is the direct emanation from the right to know, which seems to be implicit in the right of free speech and expression guaranteed under article 19(1) of Constitution." Besides Apex court, many high courts and civil societies also pitched for the right to know for citizens. With these combined efforts, the celebrity Right to Information Act ,2005 came in its present form.

Since its inception, the Armed Forces were reluctant to be included under the purview of RTI Act and they always wanted the exemption under schedule 2 of RTI Act. During the last 15 years, the Army has been raising their concern to the government of India citing the reason of national security. Last year CDS Gen. Bipin Rawat made a presentation to the government of India supporting the exemption of armed forces from RTI on the line of Central Armed Police Forces (CAPF). Now again, the armed forces renewed its pitch for a blanket exemption from the Right to Information Act during a high-level meeting chaired by the Cabinet Secretary on 28 April 2022. But the other stakeholders like veterans and the law ministry have expressed their reservation and are opposing the complete exemption of armed forces. An association of ex-servicemen and family pensioners of armed forces has even written a letter to the Prime Minister against any consideration by the government to remove the armed forces from the purview of the Right to Information Act.

Case Of Army On Exemption From RTI:

Presently, all the four branches of Armed force (Army, Navy, Airforce & Coast Guard) are under complete purview of RTI like any other civil government agency. Section 24 of RTI Act exempts certain intelligence and security organisations from ambit of this transparency law except for information "pertaining to allegations of corruption and human right violations" This list of exempted organisations is provided in schedule 2 of Act. It has 26 organisations including Intelligence Bureau, RAW, DRI, CBI, NCB, DRDO, ED and CAPFs, among others. The list provided under schedule 2 is exhaustive in nature and it can only be amended by central or state government as the case may be, by way of notification in the official Gazette and such notification shall be placed before the house of legislature. The armed forces are excluded from this list of exemption for obvious reasons as these forces are not designated as "intelligence agencies" in toto. The Army is requesting to amend this list by the central government to include itself on the ground that the innocuous information collected in parts through RTI Act could provide significant insight to enemies at external and internal front jeopardising national security. The armed forces have cited a number of cases where RTI applications filed simultaneously across various military bases/agencies and have assessed as attempts to intelligence gathering about the operational set up. Another ground taken by the Army to include it in the exemption list is that most of the RTI applications are filed by armed forces personnel seeking information for individual matters which are not of public interest. As per Army, this has opened a new platform to air the grievances of individual personnel apart from the prescribed channel. As per available data, approximately 57000 applications seeking information under RTI were received by armed forces between 2017 and 2020, out of which 986 applications sought information on operational aspects which were rejected outrightly. The major concern of armed forces cites implications for national security.

Is Argument Of Army Sustainable

When the RTI Act is analysed in its entirety, then the argument of danger to national security by armed forces does not hold water. Section 8 of Act specifically has provided certain events that ensure the exemption from disclosure by subject agency. The sub-clause (a) of this section says that there shall be no obligation to give the information sought by any citizen if the information, disclosure of which, would prejudicially affect the sovereignty and integrity of India or the security, strategic, scientific or economic interest of the state. Besides this, sub-clause (g) of section 8 also provides a defence to armed forces as it empowers any government agency subject to RTI to disallow the information sought, on ground that it may harm or endanger the life or physical safety of any person. It means the major issue of concern for the Army regarding the national security by disclosure of information may be addressed positively and effectively by section 8 of Act. The disclosure of any information that is against the national security or safety of any person may be denied without the aid of schedule 2. The inclusion of Army in schedule 2 of Act will deprive the citizen and more specifically the armed forces personnel accessing of legitimate information. The 2nd Administrative Reforms Commission (ARC) headed by Veerappa Moily had made a case in favour of the Army in its report released in 2006. The report said, "The commission feels that armed forces should be included in the list of exempted organisations (second schedule of the Act) because almost all activities of the armed forces would be covered under exemption of 8(a)"

Army cites this recommendation of this ARC while seeking exemption from RTI Act. But it is pertinent to mention here, neither ARC nor the groups supporting exemption for Army take this fact into consideration that Indian Armed Force is the largest government workforce after Railways. In a democratic set up like that of India, where the Constitution secures and guarantees the protection of fundamental rights of every citizen under chapter-III, then putting a blanket ban on seeking information from the Army is tantamount to infringement of such fundamental rights that include the right to know also. It is significant to know that RTI is a powerful tool in the hands of veterans, serving members and their families to obtain information related to their service and pension matters. This tool ensures redressal of their grievances. It is true that the fundamental rights of armed forces are restricted under article 33 of the Constitution but it does not mean that members of armed forces are 'less citizen'. They have all rights to know their service or pension related matters. Allowing the exemption to the Army will not only weaken the Act generally but will place the members of armed forces at dis-advantage vis-à-vis other citizens. Another important aspect is that the information procured under RTI Act resolves many issues of serving or retired members related to service matters, otherwise they rush to judicial forums like courts or designated tribunal to seek remedial action. This will increase the load on the already overburdened judicial system.

The expenditure on defence constitutes 13.3 percent of the central government budget and 2.1% of India's estimated GDP for the year 2022-23. The allocation of funds to defence is highest among all the ministries. In addition to salaries, a major chunk of this allocation is used for defence procurement. Depriving the citizen from seeking information on such defence deals is apparently against the very objective of RTI Act and it will eventually defeat the intention of the framer behind this legislation.

Why Army Is Desperate To Be In League Of Schedule 2:

One of the main reasons, that prompted the armed forces for inclusion in this elite group ,is to get complete exemption from all forms of disclosure by RTI. The protection provided under section 8(b) is of general nature and is subject to public interest. The public interest and information related to national security is to be weighed, and if the balance is in favour of public interest, the armed forces are bound to give information. The Army is not satisfied with this provision with partial protection on issues of national security.

Secondly, as rightly pointed out by HS Panag, a retired Lt General of Indian Army and former GOC in C of Northern & Central Command, the only reason armed forces are seeking exemption is to keep up with Joneses and in this case, the 26 central agencies notified by government in schedule 2 under section 24(2) of RTI Act. Armed forces are keen to join the league of these 26 organisations without any reason. The equivalence of armed forces with central police forces is bereft of reason. The former is not mandated with jurisdiction of internal security and investigation but the latter is. Armed forces are allocated a huge budget for which they must be held accountable in a democratic nation. Our army is constituted under mandate of constitutional provisions and therefore, transparency in form and substance is its hallmark.

It is true that the organisation that is primarily accountable for national security on the external front is the Army. It has all the rights to secure the interest of nation. National security is the sovereign function of the state and is the highest law. But in the name of national security, the public interest and violation of fundamental rights of citizens cannot be sacrificed. The data between 2017 and 2020 shows that only a miniscule percentage of RTI applications were seeking information on operational intelligence and the rest were related to matters of defence deals, audit or pension and service matters of individual members. The rights of citizens cannot be sacrificed at the cost of a few rogue RTI applications with the aim of intelligence gathering. The Army has a well-developed, robust and prescribed system in place to detect such RTI applications with vested interest and treat them accordingly. The citizens and members of armed forces cannot be denied their due rights which they are provided after a long struggle by different stakeholders.

The author is a Delhi based Lawyer and views are personal.