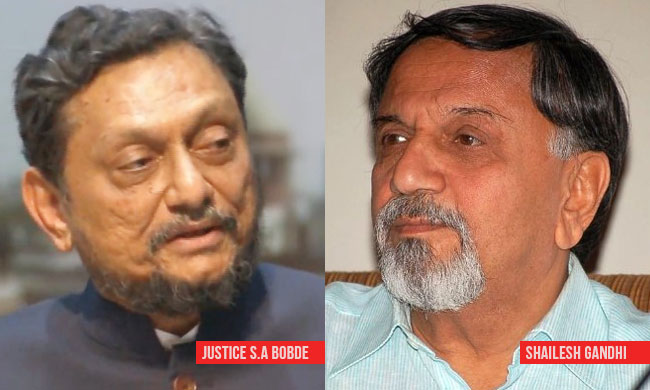 In a recent RTI related case filed by Anjali Bhardwaj, the RTI Has Come To Be A Weapon For Intimidation, There Should Be Some Filters": Observes SC CJI is reported to have said on 16 December 2019: "We are not against the right to information. But there is a need for guidelines. It cannot be an unbridled right." It has also been stated that there should be the locus for seeking information...

In a recent RTI related case filed by Anjali Bhardwaj, the RTI Has Come To Be A Weapon For Intimidation, There Should Be Some Filters": Observes SC CJI is reported to have said on 16 December 2019: "We are not against the right to information. But there is a need for guidelines. It cannot be an unbridled right." It has also been stated that there should be the locus for seeking information and that the administration is almost coming to a standstill because nobody is willing to take decisions. The Court should read Justice Mathews pronouncement and many of its judgments given before the RTI Act 2005 was implemented. The bridle is provided by Article 19 (2) and the guidelines are given in the law passed by parliament. It might also be pointed out that there is almost no known instance of government getting paralysed in legitimate work. RTI may be an impediment for corrupt or arbitrary use of power.

Let us now look at the charge that RTI is becoming a tool of blackmailers and extortionists. When a person speaks he can make allegations against any person or institution and this could do some damage. Allegation, innuendoes and charges can also be published and this can do greater damage. The publishing may be on the traditional media, web portals or social media. When allegations are published it can do great damage and harm. Yet, in the last seventy years the scope of the right to speech and publishing have greatly expanded. That sometimes these have been used to blackmail someone cannot be ruled out. Besides the practice of 'paid news' is well-founded. But nobody has espoused the cause of constricting these. We do not have the label blackmailer or extortionists hurled at the class of people engaging in free speech or publishing.

However, within 14 years a very strong narrative is being built to condemn the Right to Information. RTI users have been labelled blackmailers and extortionists. Let us examine a little closely, what a citizen can do using RTI. He can only seek information that is on records. Some harm may come only if the records show an illegal or corrupt act. It is alleged that some people get information about such actions using RTI and then blackmail the wrongdoers. While such acts of blackmailing are certainly undesirable, this can be done by speaking or publishing as well. Let us look at this from another angle. A person who engages in wrongdoing or a corrupt action is depriving society or an individual. It should be the work of society and the government to stop such undesirable actions. Our entire mechanism of vigilance departments, Anti-corruption Bureau, Central Bureau of Investigation, CVC and Lokpal is not able to expose and stop this. Many RTI users expose the wrongs and share the information publicly. Some may use the information for undesirable personal enrichment. However, should our concern be more about the wrongdoer who is unfairly robbing society, or on someone who may be picking his pocket? There is something that reflects poorly on our society which expresses greater concern about the pickpocket than the wrongdoer. The truth is all our vigilance measures have not brought down the harassment and bribe extraction from the middle and lower economic classes. We must recognize that our best vigilance monitors are the citizens using RTI who have also unearthed some major scams.

RTI activists have been persuading the government to put most information on the website as per the mandate of Section 4 of the RTI Act. If governments go completely paperless and digital, it would be easy to put most information on the website. At the very least most of the information and dashboards presently on computers should be available to citizens. This is not being done. Another simple way to stop all blackmailing using RTI information would be to put all RTI applications and responses on the websites in a searchable manner. DOPT and many State governments have issued instructions for this. But this is not being implemented since this would expose the wrong and illegal actions. Citizens, media and courts should put pressure on the government to implement this properly. Citizens need to get accountability from the government and for this they need to get more information.

We must get accountability from our government by using RTI. Our job does not end with voting but starts. This is 'rule of the people, by the people, for the people.' The citizens fulfill their role as the rulers of the nation by using RTI.

Author is a Former Chief Information Commissioner Of India.