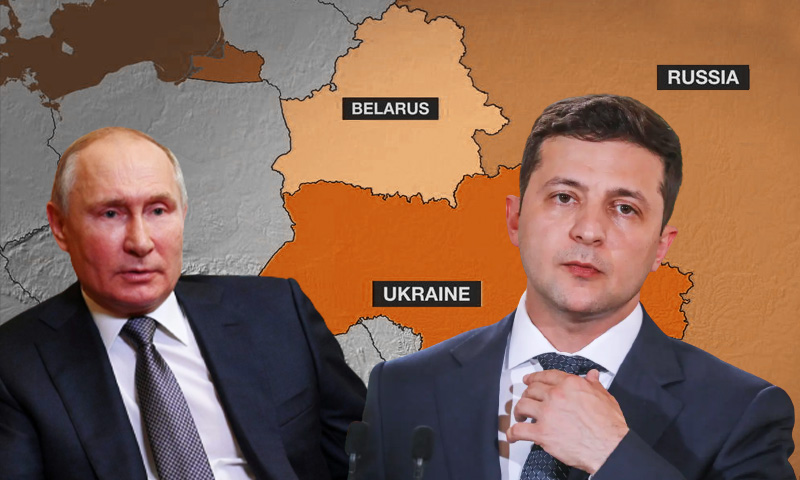 On 24 February 2022, even as the UN Security Council held emergency meetings to try and resolve ongoing tensions between Russia and Ukraine, Russia launched a military invasion into Ukraine. This blatant violation of international law has been rightfully met with widespread condemnation from the international community. It has also been met with hyperbolic claims suggesting that this...

On 24 February 2022, even as the UN Security Council held emergency meetings to try and resolve ongoing tensions between Russia and Ukraine, Russia launched a military invasion into Ukraine. This blatant violation of international law has been rightfully met with widespread condemnation from the international community. It has also been met with hyperbolic claims suggesting that this invasion marks the "death of international law". Amidst all this however, Ukraine has filed claims against Russia before the International Court of Justice, and its leaders have also requested the International Criminal Court to open an investigation into the crimes committed during the military invasion. This blog looks at the possible avenues under international criminal law to respond to the Russian invasion of Ukraine.

The International Criminal Court was set up twenty years ago, with the goal to end impunity for the most serious international crimes, namely genocide, crimes against humanity, war crimes and the crime of aggression (Article 5). It is built upon the principle of individual criminal responsibility, and accordingly can prosecute those individuals who have committed a crime within the Court's jurisdiction.

I focus here primarily on the jurisdictional basis for the ICC to prosecute those involved in atrocities committed in Ukraine. The conditions for jurisdiction and admissibility are laid out in Part 2 of the Rome Statute of the International Criminal Court. Neither Ukraine nor Russia are Parties to the Rome Statute. While Russia did initially sign the Rome Statute, it never ratified the same; and in 2016, when preliminary investigations by the then ICC Prosecutor termed Russia's annexation of Crimea as a "state of occupation", Russia withdrew its signature from the Rome Statute as a mark of protest.

While neither state is a party to the Rome Statute, Article 12(3) of the Rome Statute still allows non-member states to submit a declaration accepting the jurisdiction of the Court with respect to one or more crimes, either committed on its territory or by its nationals. In 2014-2015, in the backdrop of suspected Russian involvement in armed conflict in the Donbas region of Ukraine, Ukraine submitted a declaration, accepting the jurisdiction of the Court for crimes against humanity and war crimes committed on its territory. According to the declaration, the Court has jurisdiction for these crimes committed on Ukrainian territory since 20 February 2014, thus extending even to the current invasion.

As a result of the declaration, the pre-conditions for exercise of jurisdiction under Article 12 have been met, thereby allowing the Office of the Prosecutor to proceed with opening an investigation. Where such conditions are met, the Prosecutor can either initiate investigations proprio motu i.e., on their own initiative (Article 15), or a state party can refer the situation to the Court (Article 14). The former requires the Pre-Trial Chamber of the Court to authorise such an investigation, however this requirement is done away with in case of a referral by a State Party, thereby allowing for the process to be expedited. Over the past week, the Office of the Prosecutor has announced that they have received referrals from 39 ICC States Parties, and they have therefore opened an investigation into "past and present allegations of war crimes, crimes against humanity or genocide committed on any part of the territory of Ukraine by any person." [Note however, that the jurisdictional basis for genocide arises from a previous declaration by Ukraine, and is accordingly limited to crimes committed between 21 November, 2013 to 22 February, 2014.]

Horrific reports from Ukraine show that already many civilians have been killed in the attacks. There is significant information to suggest that Russian forces have been using missiles and other explosives in densely populated civilian areas. Both intentional attacks against civilian populations, as well as use of weapons which are inherently indiscriminate constitute war crimes under the Rome Statute (Article 8(2)(b)). Further detailed investigations can provide more information on the extent of the crimes, and identify specific violations of the Rome Statute. In addition to the ongoing investigative efforts by the ICC itself, other investigative journalists have also been archiving video and other 'user-generated' evidence which can subsequently assist the ICC.

It is key to note that the ICC prosecutor has not included crime of aggression within the investigation. This is because of the different jurisdictional basis of this crime. When the Rome Statute was adopted in 1998, the drafters wished to include crimes of aggression within the ambit of the Court's jurisdiction, however, they were not able to reach consensus on its definition. This was eventually resolved at the 2010 Kampala review conference, when the Statute was amended to include Article 8 bis dealing with the crime of aggression.

Article 8 bis defines an act of aggression as the "use of armed force by a State against the sovereignty, territorial integrity or political independence of another State" [Article 8 bis(2)] and attributes criminal responsibility to those who effectively exercise control over, or direct the military or political actions of the attacking state. In light of Russia's invasion into Ukraine, it seems abundantly clear that there has been use of force as under Article 2(4) of the UN Charter, and constitutes an act of aggression. However, Article 15 bis - also introduced through the Kampala review conference - lays down specific conditions for exercising jurisdiction over the crime of aggression. In the absence of a UN Security Council referral (under Article 13(b) and Article 15 ter of the Rome Statute), the Court cannot exercise jurisdiction unless both the involved states are party to the ICC. Since neither Russia nor Ukraine are party to the ICC, the Court cannot exercise jurisdiction over the crime of aggression.

As a result, despite strong evidence to show that an act of aggression has indeed been committed against Ukraine, the ICC cannot prosecute anyone for the crime of aggression since it lacks the jurisdictional basis to do so. The only way for the ICC to exercise jurisdiction would be through a Security Council referral, which of course seems highly unlikely considering Russia's veto power as a permanent member of the Council. Some commentators have also suggested setting up a special court or ad hoc tribunal, similar to those for Sierra Leone and Rwanda, to overcome the jurisdictional limits faced by the ICC in prosecuting the crime of aggression in the present instance. However, the requisite consent by Russia for such an ad hoc tribunal seems as unlikely as a Security Council referral.

Other alternatives have also been suggested. For instance, several countries exercise universal jurisdiction over the crimes of aggression, and can accordingly try Russian officials. The term 'universal jurisdiction' means that pursuant to domestic legislation, courts can try foreign nationals for international crimes, even where there is no link between that state and the crime or the accused. Ukraine can also exercise jurisdiction over crimes committed in its territory and indeed has in the past prosecuted some Russian officials for their role in the annexation of Crimea. However, under customary international law, Heads of States, other high-ranking officials as well as diplomatic agents, hold absolute immunity from criminal jurisdiction in foreign states. This is necessary to ensure that they can effectively discharge their functions on behalf of their states, and thus extends until the person in question is still in office. While the ICC is not bound by considerations of immunity (Article 27), the ICJ has clarified in the Arrest Warrant (Congo v. Belgium) case that for domestic courts, this personal immunity extends even to cases concerning international crimes, such as war crimes or crimes against humanity. Thus, while Putin and other high-ranking officials are still in office, they cannot be prosecuted in any other country, no matter how grave the crime.

Who can be prosecuted?

The official policy of the Office of the Prosecutor at the ICC is to focus its investigation on the people "most responsible" for crimes, that is, the senior officials and leaders directing the attacks rather than the foot soldiers. Article 25(3)(b) attributes individual criminal responsibility for, amongst other things, ordering the commission of international crimes. Further, Article 28 of the Rome Statute codifies the principle of command responsibility, holding military commanders and other superiors responsible for crimes committed by forces under their control, if they knew that such crimes were committed and did not take steps to prevent the same. Consequently, Putin as well as other senior government officials and military commanders can be held responsible for any war crimes and crimes against humanity ordered by them, or where they failed to prevent such crimes being committed by forces under their effective control.

Even with the quick action taken by the ICC Prosecutor as well as other states in referring the situation to the Court, it will take years for the trial and potential appeals to be completed. Even if the Court eventually issues arrest warrants against Putin and any other Russian (and potentially Belarusian) leaders, their extradition and arrest would remain near-impossible unless there is regime change in these countries in the future.

Despite these shortcomings, the ICC's investigation, and potentially a trial in the future, still holds significance. It offers an international legal response to Putin's blatant disregard for international law, including international humanitarian law. It is possible that initiation of investigations may also deter the armed forces on the ground from committing more crimes. Imperfect as it may be, it is hoped that international criminal law is able to play its part in preventing further atrocities, or at least eventually end impunity for the crimes already committed.

* Pramiti Parwani is a PhD candidate at the University of Amsterdam. Her thesis relates to access to vaccines in low-and-middle-income countries, in particular looking at the role India and the European Union can play in facilitating the same. Previously, sh has completed her LL.M in International Law from the Graduate Institute, Geneva and her undergraduate from NUJS, Kolkata.