The Jurisdictional Tussle- CCI vs. SEBI 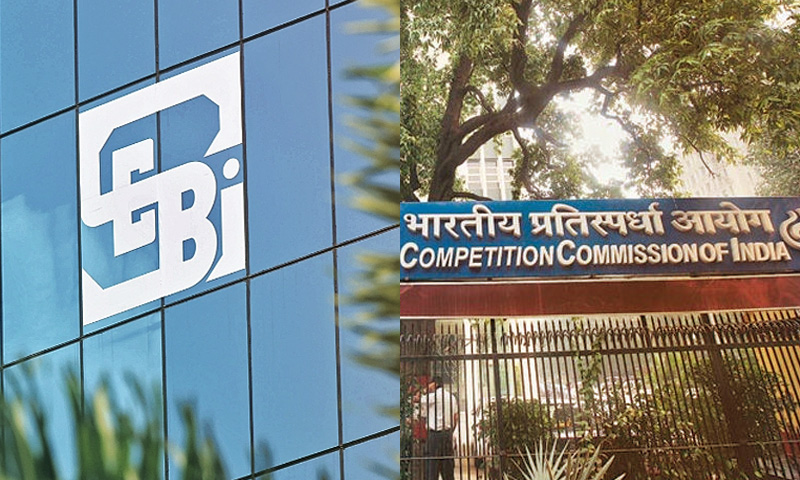 'Amalgamation' also known as 'Merger' is a market term that alludes to the blend of two organizations wherein in any event one organization's existence is lost. With the growth of the Indian Market, the Legislature comprehended the slant and worked their way forward in order to protect the consumers against stonewalling by monopolistic approaches of enterprises. It looked for the...

'Amalgamation' also known as 'Merger' is a market term that alludes to the blend of two organizations wherein in any event one organization's existence is lost. With the growth of the Indian Market, the Legislature comprehended the slant and worked their way forward in order to protect the consumers against stonewalling by monopolistic approaches of enterprises. It looked for the protection from small enterprises against a forceful takeover by established strong enterprise and to check the marketing creation of monopolies.

The Securities and Exchange Board of India ('SEBI') and the Competition Commission of India ('CCI') are isolated autonomous administrative bodies that regularly jurisdictionally cover one another by overlapping. It takes place due to the mutually shared trait in their targets of providing for the guarantee of the security of customers and advancing a health and sound market. Be that as it may, neither of the two acts provides us with the remedy or the cure for the cause of jurisdictional overlap. This equivocalness prepares for the simultaneous locale of both the controllers which further prompts clashing choices and legitimate vulnerability.

The Competition Commission of India ('CCI') screens markets of all nature to recognize any enemy of serious practice by people or endeavors prompting an apparent antagonistic impact on the competition. This implies that the CCI's forces and power likewise cross areas represented by exceptional laws and managed by specific 'sectoral controllers', constantly prompting an obvious jurisdictional clash. Stood up to with this issue, the CCI has endeavored to determine the cover of the ward with the Securities and Exchange Board of India ('SEBI') in Re: Brickwork Ratings India Pvt. Ltd. and, CRISIL Ltd. and, Others.

The National Highways Authority of India had welcomed tenders from FICO assessment organizations 'CRAs' to rate its security issuances, in accordance with which CRISIL Ltd., India Ratings and Research Pvt. Ltd., CARE Ratings Ltd. furthermore, ICRA Ltd. The 'Inverse Parties' presented their value cites. The Informant asserted that the Opposite Parties cartelized and cited indistinguishable rates in the offer and, consequently, enjoyed against serious practices in contradiction of segment 3 of the Competition Act, 2002.

Since CRAs are managed by SEBI, the CCI welcomed remarks from SEBI concerning the Information. SEBI opposed the jurisdiction of the CCI yet gave any data, on the off chance that the CCI were to start any activity against the Opposite Parties. Thusly, the CCI continued with the Information.

As SEBI is the power controlling CRAs, a clear clash of purview between the CCI and SEBI arises. This obvious clash between the CCI and a sectoral controller must be accommodated considering the special job every one of these bodies plays, as likewise, it interplays between the competition law and the securities law.

The Delhi High Court gave its judgement in the case of Telefonaktiebolaget LM Ericsson v. CCI WP (C) 464/201, that the Competition Act is notwithstanding or in derogation and is not in criticism of, some other Act as well. As this case particularly included the maltreatment of patent rights, any serious arrangement which forces preposterous conditions was held to be in the negation of Section 3 of the Competition Act. This judgment prompts the understanding that protections laws overseeing CRAs can't be understood to be in clash with the Competition Act. As the last is notwithstanding, and not offensive with, the previous.

In CCI v. Bharti Airtel, the Supreme Court in the year 2018 provided with a judgement that was conclusive in settling the jurisdictional clashes between sectoral controller TRAI and the CCI, and in illustrating the differentiation between the two. The Court had clarified that the 'CCI isn't an area-based body yet has the jurisdiction across which rises above sectoral limits, in this way covering every one of the businesses.'

On the idea of the remedy provided under both the Acts, the Court clarified that regardless of whether TRAI declares that the condemned action is against serious, subsequently causing considerable antagonistic on competition, its forces and powers would be restricted to the move that can be made under the TRAI Act alone. It is the CCI that is the master body in contemplating the subtleties of the competition in the market providing more primary remedies, which advance the section of new players, and consequently the competition on the lookout. Along these lines, in Bharti Airtel, the Supreme Court didn't inside and out avoid the purview of the CCI within the sight of a legal sectoral controller, however just conceded it to a later stage.

SEBI's primary job, according to the preamble of the SEBI Act, 1992, is to manage the protections markets. Consequently, it goes about as the controller of the protections market, in contrast to the Controller of Patents. CRAs rate the issue of protections to empower planned financial backers in translating the degree of dangers and reliability of the protections. CRAs have represented under the SEBI (Credit Rating Agencies) Regulations, 1999 ('CRA Regulations') and are directed by SEBI. The CRA Regulations have set out a Code of Conduct in their Third Schedule which order that a CRA 'will notice elevated expectations of respectability, poise and reasonableness in the direction of its business and it 'will not enjoy any out of line rivalry'. SEBI is the power to review, explore and start procedures against a CRA if there should arise an occurrence of negation of the CRA Regulations.

In the current case, the Opposite Parties had supposedly framed a cartel for offer gear, subsequently falling afoul the Competition Act. The Opposite Parties fought that the CCI comes up short on the purview to continue against them, as SEBI is the controller of CRAs and activities the essential locale under the CRA Regulations to start an activity against them. Dismissing this conflict, the CCI depended upon the Bharti Airtel judgment to decide that the simple presence of a sectoral controller, viz. SEBI doesn't smother the purview of the CCI. Albeit the topic of CRAs falls inside the space mastery of SEBI, looking at any direction of a CRA claimed to be against serious is inside the jurisdictional ambit of the CCI.

The Supreme Court, in Bharti Airtel, has amicably deciphered the targets of the Competition Act and TRAI Act. The Court has accommodated the unmistakable elements of the CCI and TRAI to clear a path for both the legal bodies and evade any obvious clash of forces. Resultantly, the CCI's jurisdiction had not been through and through banished, however, just pushed to a later stage until the finish of procedures by the area explicit controller.

In accordance with this two-venture measure approach, the CCI had welcomed remarks from SEBI, to which the last expressed that the claims levelled against the Opposite Parties draw in the arrangements of the CRA Regulations. Moreover, SEBI is the correct power to engage any objection against CRAs and that the CCI may not engage something similar. It is to be noticed that SEBI didn't state in its remarks whether it has started an enquiry against the Opposite Parties for purportedly mocking the Code of Conduct under the CRA Regulations. Subsequently, SEBI didn't sufficiently manage the jurisdictional realities and specialized issues, nor did it outfit any data on any procedure against the Opposite Parties. In the light of these conditions, the CCI practiced its locale and continued to choose the matter on merits.

The CCI has unmistakably followed the Bharti Airtel judgement in the current case and permitted SEBI to practice its purview and ponder activities under pertinent laws. In any case, SEBI simply protested the purview of the CCI and, as obvious from the remarks, didn't start further activities under the CRA Regulations. The CCI has strived to apply the two-venture measure within the sight of a sectoral controller. After the assessment, the CCI reasoned that there were no materials to show any maltreatment of predominance and the lead of the Opposite Parties didn't represent any kind of danger to the competition in the market.

While Ericsson has managed forces of Controller of Patents versus the CCI, Bharti Airtel analyzed the clashing purview between the CCI and TRAI. The presence of a particular legal body has consistently offered to ascend to vulnerabilities concerning the jurisdiction of a body like the CCI which isn't restricted to a particular area. As per section 62 of the Competition Act, it sets out that arrangements of this Act are notwithstanding, and not in criticism of, some other law. This mirrors the authoritative aim that there ought to be no repugnancy between the CCI and a legal body or a sectoral controller. This case further explains the hazy situations where the CCI's jurisdiction can be seemed, by all accounts, to be in clash with the protections market controller. The CCI is inside its forces to practice ward over CRAs and some other protections market-related body to the degree of their competition of serious lead in the market. Consequently, the CCI has endeavored to dodge any predictable clash with SEBI by giving it the room to continue under the CRA Regulations.