Students, UGC & State : Why There Is More At Stake Than Just Final Exams? 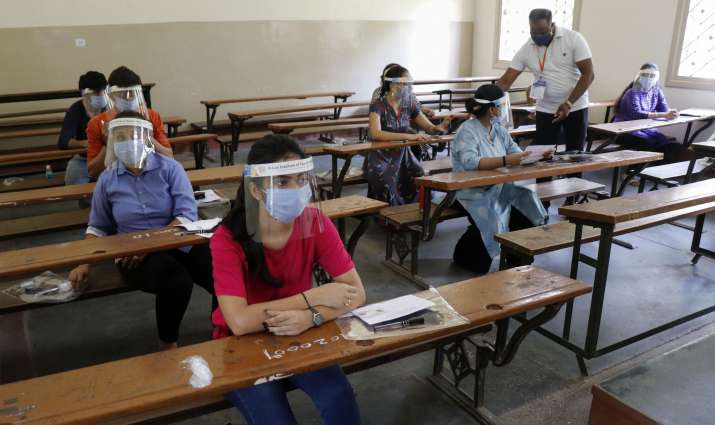 x
The UGC had recognised the limitations of year-end exams as a one-time evaluation. Yet our obsession with the exam persists.

The Supreme Court is hearing an important matter concerning the final exams of students of different States. A slew of petitions have been filed in this regard in the Apex Court. Since the matter is sub judice, it would not be appropriate to comment on it, and in any case, that is not the purpose of the article. This article seeks to highlight the more fundamental...

The Supreme Court is hearing an important matter concerning the final exams of students of different States. A slew of petitions have been filed in this regard in the Apex Court.

Since the matter is sub judice, it would not be appropriate to comment on it, and in any case, that is not the purpose of the article. This article seeks to highlight the more fundamental issues related to education, and the legislation on education, which are once again in focus, because of the present batch of petitions.

It was in 1976 during the Emergency that the 42nd Amendment was made to the Constitution of India. The highly controversial amendment placed various subjects on the Concurrent List, thus giving powers to the Centre along with the States to legislate on these. Education (item no. 25 in the Concurrent List or List III of the Seventh Schedule of the Constitution) was one of these subjects, and this included higher and technical education and medical education as well. Effectively, the States no longer had the only say when it came to matters related to education. Further, item no. 25[1] was made subject to the provisions of certain item nos. in the Union List (List I of the Seventh Schedule of the Constitution), and these included item no. 66[2].

The University Grants Commission (UGC), which is the key respondent in the petitions filed in the Apex court, in fact, owes the foundational scheme of its Act to item no. 66 of the Union List.

There have been several cases in which the States and their educational institutions have found themselves at loggerheads with the UGC. The issues agitated in these cases have been mainly over approvals, appointments, promotions and pay. The present case is very different but it alludes to the critical principle of federalism that makes the Union of India possible.

The new National Education Policy (NEP) with its proposed regulator, the Higher Education Commission of India (HECI) that will replace the UGC, is centralising in its approach. The autonomy of the States is likely to be greatly reduced. This in turn has practical ramifications as well. Unitary, top-down approaches not only dilute the federal structure but also pose a direct threat to the plurality and diversity of India with its mosaic of cultures in which education is not merely a delivery of a service, but is also intricately interwoven with its local culture in more ways than we can imagine. States like Tamil Nadu which have already come out in protest of the NEP vis-à-vis the imposition of languages.

The NEP is also problematic in other ways and gives private players a wide berth. Loans will replace grants, and on the whole education will be further commoditised. Higher education is also at particular risk of becoming a costly commodity, which basically translates into limiting access for the underprivileged and marginalised sections of our society. Even those who can secure the loans will be caught in the spiral of debt. It may be instructive to know that outstanding student loans in the US are already piling up as bad debts to the extent that it will terribly impact the US economy when it all comes unravelling.

In the current climate, our higher education institutions also risk homogeneity undermining heterogeneity, and the the lifeblood of the University, which is dependent on the free flow of ideas and opinions will further be stunted and guarded.

The UGC has nowhere the far-reaching powers that the proposed HECI will. In fact, it may be said that the HECI will bear no resemblance to the UGC. Yet with these petitions, the preliminary stage is set for Centre v/s the State, even as the novel coronavirus continues to rage. The UGC anyhow has indicated that all State Universities must compulsorily follow its second set of guidelines issued on 6th July 2020, and that all final exams must be conducted before the end of September 2020. While this central body's guidelines remain to be tested in court, the outcome in this matter will have a considerable impact, no matter which way it will go.

While the federal argument may not be directly in issue given that UGC's guidelines will find challenge in another Central Act itself, that is the Disaster Management Act (DMA), 2005, the outcome nevertheless, will be a test of the federal principle. After all, though the Disaster Management Act is a Central Act, its scheme has an inherent federal structure that goes right down to the local authority in each State. In fact the DMA is a wonderful (perhaps accidental) example of actual concurrence between Centre and State, because disaster, after all, must be administered and managed locally in spite of all the help that may arrive from outside.

Exams, which are in issue in the present petitions, must also be managed locally. Exams are not to be undermined but clearly the Covid-19 situation is extraordinary. Like a lot of things that fall in two camps today, exams too are being in discussed in simplistic and meaningless binaries such as yes and no, and good or bad. The truth is that exams in our context have long been reduced to a formality for the sake of receiving the degree. The way our exams are still conducted for the better part, can barely be said to be testing actual knowledge and skill. Pages after pages must be filled and scribbled on. By the end of the last paper, very little knowledge actually is gained and retained. The struggle to finish writing the paper is the least of it. Bureaucracy and negligence further compound the evaluation and the declaration of the result. Unlucky students may have to run even from pillar to post to get their degrees long after they have written the exam, and revaluation and ATKT (Allowed To Keep Term) have become de rigueur.

Interestingly, but never mind, that the UGC itself had long ago recommended regular and continuous assessment combined with a system of giving credits during the entire duration of the coursework. The UGC had recognised the limitations of year-end exams as one-time evaluation. Yet our obsession with the exam persists, so much so, that we moralise about it and agonise over it without realising that education is not about the exam but that the exam is merely one component of education. It is an important and necessary component but it is only important and necessary to the extent that the system as a whole works, which is far from being the case.

The larger issue is that apart from a few exceptions, for a long time now, education has by and large been compromised in our country. The policies, especially since the late eighties, have moved away from the concept of education as a public good that the State must ensure and uphold. Even the Right to Education Act, 2009 that eventually led to the 86th Amendment to the Constitution of India in 2002, suffers: It restricts the age group of the students (6 to 14 years) to receive free and compulsory education; it leaves the exercise to each State without agreeing on parameters to determine rounded and robust education that should go hand in hand with free and compulsory education (Article 21A). Moreover, the 0 to 6 years age group is relegated to the Directive Principles of State Policy (Article 45), and hence not a justiciable right. But in spite of the State being invested in the cause of school education, in most cases, the infrastructure itself is dismal, if non-existent. Meanwhile, private schools can charge fees as they please even as they get tax benefits. Few public-private partnerships have meaningfully worked out and have been sustained.

On the other hand, higher, technical, professional and medical education has just been left to its own devices. Today, few public universities in the country can claim the reputation and the stature they once had, but public universities remain critical for accessible and equitable higher education. In recent times, cultural politics and ideological warfare have targeted Universities and made them vulnerable.

The proposed HECI is, of course, all set to overturn everything with its overarching regulatory framework in which academic independence and institutional autonomy will be almost non-existent. The HECI also does not have grant making powers as was one of the key mandates of the UGC. Grants have been given out for various things, research being an important area. The UGC has been drawing flak over its functioning but the proposed HECI hardly appears as a better alternative. Ultimately if the system is going to be overrun by babus instead of academicians and who themselves will be answerable to their ministers, both diversity and academic excellence are at severe risk. Problems have abounded but it appears that even more difficult challenges lie ahead. Exams are the least of these.

*Deepa Punjani is a Mumbai-based lawyer. She is keenly interested in the dialogues possible between the judiciary and civil society, and in the intersections between law, policy, politics, and culture. Views are personal.

Disclosure: The author is assisting Maharashtra Students Union (MASU) which has filed an intervention application (IA) in the case pending in SC against the UGC direction to hold final year exams by September 30.

[1] Item no. 25 (Concurrent List): Education, including technical education, medical education and universities, subject to the provisions of Entries 63, 64, 65 and 66 of List I; vocational and technical training of labour.

[2] Item no. 66 (Union List): Co-ordination and determination of standards in institutions for higher education or research and scientific and technical institutions.