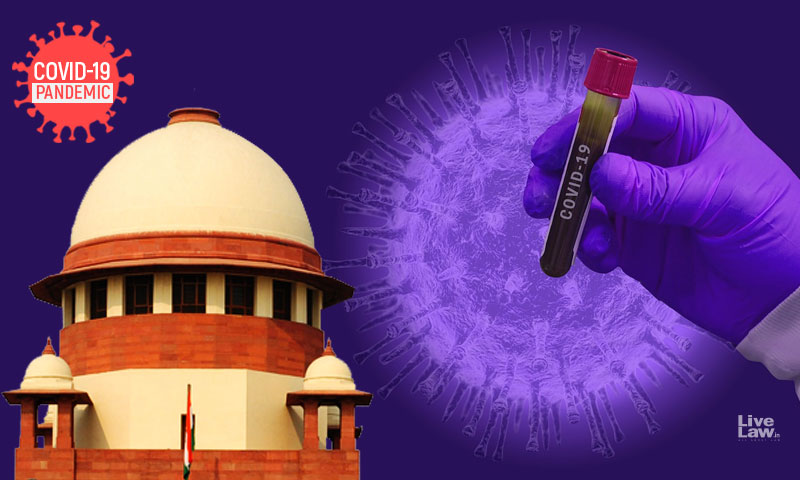 The petition was a PIL. COPY had been served on the Solicitor General but no counter affidavit had been filed. The private labs were not made a party and direction against them was ex parte. The direction is of a final nature though passed as an interim measure. ( final orders as interim order are generally not passed. But here the situation was emergent). Court says private labs have a vital role to play but they should play with a philanthropic spirit. It says reimbursement would be considered later.

Once we realize that testing is the need of the hour and several experts demand enhanced testing, and that situation is one of extreme emergency, the Supreme Court cannot be faulted for passing an extraordinary order of an interim, though final, nature. Unique emergent situation calls for unique approach. Waiting for counter-affidavits and making of parties would have defeated the cause. Issue confronting the court was one pertaining to the domain of " Life and Personal liberty" - Art. 21 of the Constitution. Lockdown is meant to save life. Testing is meant to save life. Hence direction was issued by the court.

The order may be in the domain of policy. But fundamental rights operate as against policy decisions. Policies are not immune from Judicial review though generally courts refrain from entering into that domain. However when issues of life and personal liberty arise the courts would be competent to intervene. In Aadhar case a 9 JJ bench of the court has in the context of Art 21 held that state has a positive duty to protect life and personal liberty.

Here the state had taken a decision to rope in private labs for the testing. It itself was doing free testing as pandemic created a critical situation and people were becoming victims of virus. It is already providing free food to the poor. So the government is conscious of the need to save lives. However, for private labs it fixed a price of 4500 rupees per test. Yes labs will have to spend on kits, manpower, etc in order to test. Labs too exercise fundamental rights under Art 19(g) and to ask them to provide free would amount to confiscation and deprivation under Art 300 A. Supreme Court is conscious of this and has said it will consider reimbursement issue later. The Philanthropy envisaged is only till the determination of reimbursement. Labs should intervene in the matter and place their point of view and expense details before the court and seek directions for recompense. Once recompenced their rights and interest would stand protected.

Meanwhile, the government should itself evolve an appropriate mechanism for reimbursement. The scheme should ensure that the rich and competent should pay their way. The rich should on their own pay. If the government evolves a way there will be no need for adjudication.

In my view the order of the Supreme Court of India is Supreme and meets the test of Judicial review required for the emergency needs of testing, keeping in view the fact that government labs are testing free as also that economy is declining, unemployment is growing, poverty is increasing and an overwhelmingly large population faces starvation.

Advocate Rakesh Dwivedi is a Senior Advocate at the Supreme Court of India. The views are personal.