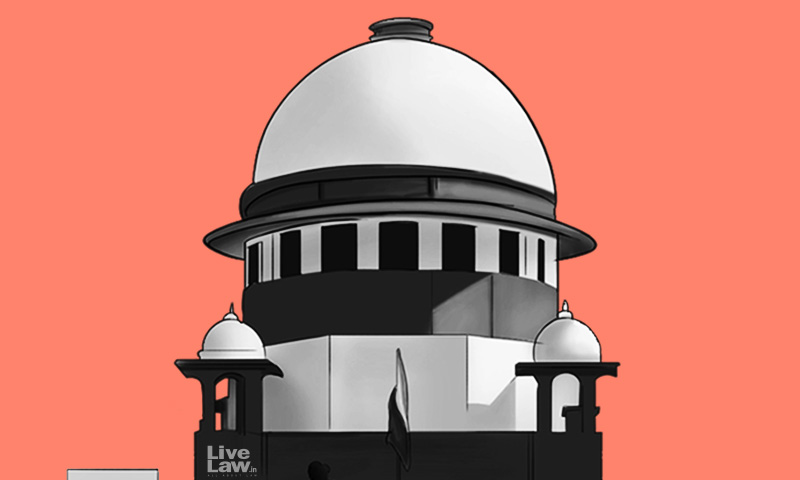 Justice N. Kirubakaran of the Madras High Court, in a judgment delivered just before his retirement last month, suggested amendment of the Constitution for establishment of regional benches of Hon'ble Supreme Court. "No impression should be given that the Hon'ble Supreme Court is meant only for the people living in and around New Delhi or the States surrounding New Delhi. India is a...

Justice N. Kirubakaran of the Madras High Court, in a judgment delivered just before his retirement last month, suggested amendment of the Constitution for establishment of regional benches of Hon'ble Supreme Court. "No impression should be given that the Hon'ble Supreme Court is meant only for the people living in and around New Delhi or the States surrounding New Delhi. India is a very vast continent from Jammu and Kashmir in the North to Tamil Nadu in the South and Gujarat in the West to Manipur in the East." the judge said.

The idea of establishment of regional benches of the Supreme Court is not new. It can be traced to the discussions that took place in the Constituent Assembly about the amendment moved by Dr. Ambedkar.

To this, T. T. Krishnamachari responded that the amendment moved by Ambedkar does not preclude the possibility of the Supreme Court sitting at Delhi and at some other place. Pandit Thakur Das Bhargava supported Kapoor's amendment and said that as long as Delhi is the Capital, the proper place for a Supreme Court is at Delhi. HV Kamath said that the mention of Delhi was unnecessary. Responding to this discussion, Dr. Ambedkar said: A court must have a defined place where it shall sit and the litigants must know where to go and whom to approach. Consequently, it is necessary to state in the statute itself as to where to court should sit and that is why the word Delhi is necessary and is introduced for that purpose. The other words which occur in article 108-A are introduced because it is not yet defined whether the capital of India shall continue to be Delhi. If you do not have the words which follow, "or at such other place or places, as the Chief Justice of India may, with the approval of the President, from time to time, appoint" then, what will happen is this. Supposing the capital of India was changed, we would have to amend the Constitution in order to allow the Supreme Court to sit at such other place which Parliament may decide as the capital.

Then Kapoor sought a clarification whether it is open to the Supreme Court so long as it is sitting in Delhi, to have a circuit court anywhere else in this country simultaneously?

Yes, certainly. A circuit court is only a Bench, Dr. Ambedkar said. The discussion concluded when Kapoor withdrew his amendment. Dr. Ambedkar's amendment was adopted.

In 1986, the Supreme Court, in a judgment (Bihar Legal Support Society vs. Chief Justice of India), observed that it was 'desirable to set up a National Court of Appeal which would be in a position to entertain appeals by special leave from the decisions of the High Courts and the Tribunals in the country in civil, criminal, revenue and labour cases and so far as the present apex court is concerned, it should concern itself only with entertaining cases, involving questions of constitutional law and public law. ' 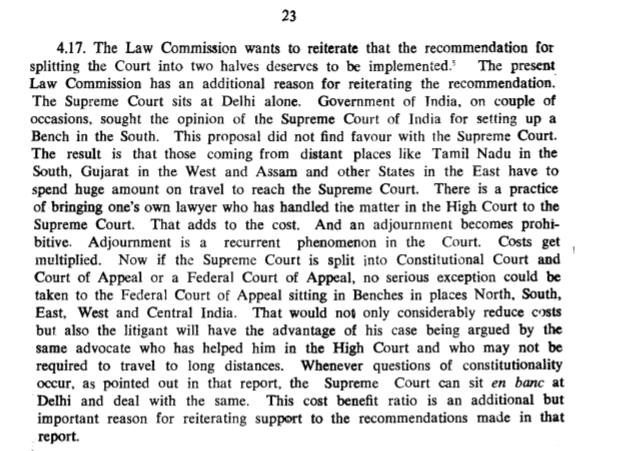 Two years ago, the Vice President Venkaiah Naidu had also spoken in favour of this idea. Last year, speaking at the Constitution Day function organised by the Supreme Court, Attorney General K. K. Venugopal suggested creating four benches Of Court Of Appeal with 15 Judges each sitting across the country. The former Union Law Minister Ravi Shankar Prasad, in response to a query in Parliament, had stated that the idea of a separate Bench of the Supreme Court outside Delhi has not found favour with the Supreme Court of India.  Recently, Rajya Sabha Member and senior lawyer P Wilson had moved a Private Member Bill termed as the Constitution (Amendment) Bill, 2020 that seeks to establish 4 Permanent Regional Benches of the Supreme Court.

In fact, a Puducherry-based advocate V. Vasantha Kumar, had filed a Public Interest Litigation for establishing a National Court of Appeal (NCA) with regional benches in major cities- Kolkata, Mumbai and Chennai- to hear appeals against orders of high courts. A three Judge Bench later referred the following 11 Questions to Constitution Bench:

If we look closely, these suggestions about having a national court of appeal, and regional bench of the Supreme Court are mooted to address two basic issues viz. pendency of cases, and access of litigants to justice.

As per the latest 'statistics' released by the Supreme Court, there are 69,956 matters pending before it. Most of these matters are appeals filed against the judgments and orders of various High Courts and Tribunals. Among this 446 are Constitution Bench matters. One nine judge bench matter is pending since 2002.

Article 32 of the Constitution confers original jurisdiction to the Supreme Court in regard to enforcement of Fundamental Rights. The Supreme Court has power to direct transfer of any civil or criminal case from one State High Court to another State High Court or from a Court subordinate to that of another State High Court. The Supreme Court, if satisfied that cases involving the same or substantially the same questions of law are pending before it and one or more High Courts or before two or more High Courts and that such questions are substantial questions of general importance, can withdraw a case or cases pending before the High Court or High Courts and dispose of all such cases itself. Under the Arbitration and Conciliation Act, 1996, International Commercial Arbitration can also be initiated in the Supreme Court. Its original jurisdiction also extends to any dispute between the Government of India and one or more States or between the Government of India and any State or States on one side and one or more States on the other or between two or more States, if and insofar as the dispute involves any question (whether of law or of fact) on which the existence or extent of a legal right depends. The Supreme Court also has  advisory jurisdiction in matters which may specifically be referred to it by the President of India under Article 143 of the Constitution

The Indian Constitution does not have the concept of National Court of Appeals. In 2017, there were reports that the Centre and the Supreme Court are reportedly deliberating on establishment of Courts of Appeal, which will be placed higher than District Courts, but below High Courts, to hear appeals from District Courts in all civil and criminal cases will be heard by these Courts of Appeal.

The Supreme Court of Kenya, which holds sittings in its building at Nairobi, has exclusive original jurisdiction to hear and determine disputes relating to the elections to the office of President. It can also hear appeals from the Court of Appeal if it involves interpretation or application of the Constitution. A matter certified by the Supreme Court or the Court of Appeal as one that involves a matter of general public importance is also appealable before it. It can also render advisory opinion at the request of the National Government, any State organ, or any County Government, determine the validity of a declaration of a state of emergency,  and hear appeals from a tribunal constituted for removal of Judges from office.

The Constitution Bench of the Supreme Court, in a judgment delivered in 2016, held that access to Justice is a Fundamental Right guaranteed to citizens by Article 14 and Article 21 of the Constitution of India. Four main facets, the Court said, constitute the essence of access to justice:

i) The State must provide an effective adjudicatory mechanism;

ii) The mechanism so provided must be reasonably accessible in terms of distance;

iii) The process of adjudication must be speedy; and

iv) The litigant's access to the adjudicatory process must be affordable.

Elaborating point (ii), the Court said that the forum/mechanism so provided must be reasonably accessible in terms of distance for access to justice since so much depends upon the ability of the litigant to place his/her grievance effectively before the court/tribunal/court/competent authority to grant such a relief. "Access to justice will again be no more than an illusion if the adjudicatory mechanism provided is so expensive as to deter a disputant from taking resort to the same. Article 39-A of the Constitution promotes a laudable objective of providing legal aid to needy litigants and obliges the State to make access to justice affordable for the less fortunate sections of the society.", the Court had observed.

Is the Supreme Court reasonably accessible in terms of distance and affordability ?

The Supreme Court, located at Delhi, is not accessible for citizens from many parts of the Country and for many, it is not affordable as well. Due to these obstacles, many good and important matters do not reach the Highest Court.

Though in the context of 'Tribunals', Justice Hemant Gupta, a judge of the Supreme Court, in his dissenting opinion in Madras Bar Association case, highlighted the concern of lawyers and litigants about concentration of Tribunals in Delhi. The judge observed that shifting the principal benches of the certain Tribunals outside Delhi will help the Bar to grow at different places and would also resolve the challenge of scarcity of housing in the Capital. He added that it is expensive for the litigants to engage professional services in Delhi, which is out of capacity for a large section of the society.

What the judge said about Tribunals is also, in my humble opinion, applicable to the Supreme Court also. If we have regional benches of the Supreme Court outside Delhi, it will help the Bar to grow in different parts of the Country. The issue of distance and affordability will also be addressed by establishing regional benches. This would not need any amendment since the Constitution itself empowers the Supreme Court to sit in 'such other place or places, as the Chief Justice of India may, with the approval of the President, from time to time, appoint'.

(Author is a lawyer practicing in High court of Kerala ; Views are personal)