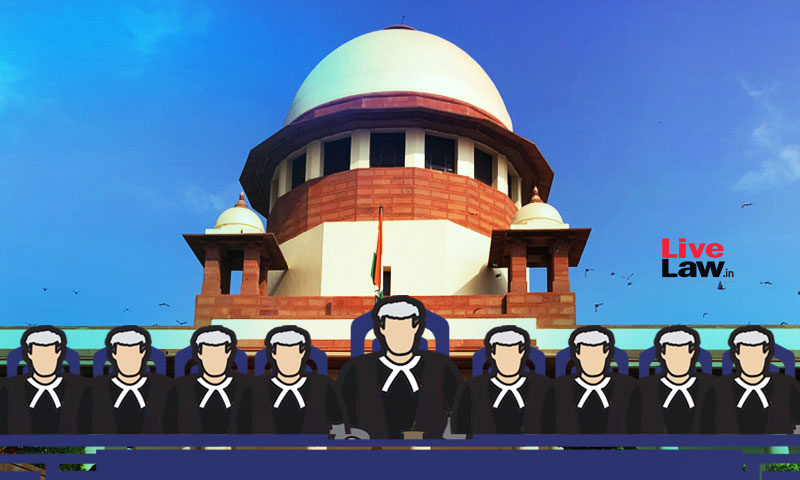 As per the 'statistics about matters pending in Supreme Court' published last month, there are 5 Nine Judges Bench Matters pending before the Supreme Court.These cases pertains to interpretations of : (1) 'material resources' in Article 39(b) of Constitution (2) Section 18-G of Industries (Development and Regulation) Act, (3) 'Industries' in Industrial Disputes Act (4) Royalties on...

These cases pertains to interpretations of :

(1) 'material resources' in Article 39(b) of Constitution

(5) The questions on religious practices referred in Sabarimala review.

This case involves interpretation of Article 39(b) of the Constitution which speaks of the distribution for the public good of the ownership and control of the material resources of the community. The reference was made in the year 2002 since the seven judges bench observed that they have 'some difficulty in sharing the broad view that material resources of the community under Article 39(b) covers what is privately owned.'

In State Of Karnataka vs Ranganatha Reddy AIR 1978 SC 215, Justice Krishna Iyer, speaking for himself and two other judges, opined that 'material resources' of the community covered all resources, natural and man-made, publicly and privately owned. The other judgment in the said case, delivered by Untwalia, J., on behalf of himself and three other Judges, did not consider it necessary to express any opinion with regard to Article 39(b), but clarified that they did not subscribe to the view taken by Krishna Iyer J. This view taken by Krishna Iyer, J. was later affirmed by a Constitution Bench in the case of Sanjeev Coke Manufacturing Company vs. Bharat Coking Coal Ltd.  AIR 1983 SC 239,. Later nine judge bench in Mafatlal Industries Ltd. vs. Union of India (1997 (5) SCC 536) observed that "the material resources of the community are not confined to public resources but include all resources, natural and man-made, public and private owned is repeatedly affirmed by this Court".

This case was last listed in chambers in May 2017 to allow an intervention application.

This case is about the States' power to regulate industrial alcohol as a product of the Scheduled industry under Entry 33 of List III of Seventh Schedule of the Constitution. This reference was made in the year 2007 after the five judges Constitution bench observed that the view taken in Synthetics Chemicals Limited & Ors. vs. State of Uttar Pradesh requires reconsideration. The bench observed that if the decision in the Synthetics and Chemicals case (supra) with regard to the interpretation of Section 18-G of the 1951 Act is allowed to stand, it would render the provisions of Entry 33 of List III nugatory or otiose. The following questions were referred:

The seven judge bench, in the year 2010, referred the matter to a nine judge bench. Last month, while granting leave in an SLP which raised similar issues, the court tagged it with this case.

In 2005, a five judges constitution bench had referred the case to a seven judge bench observing that the judgment by Justice Krishna Iyer in Bangalore Water Supply and Sewerage Board v A.Rajappa case, requires reconsideration. In the said judgment, expansive meaning was given to the term 'industry' to cover most establishments that involved employer-employee relationship, irrespective of the objectives of the organisation concerned and its ownership and structure. The seven judge bench, in 2017 [2017) 3 SCC 311], referred the cases to nine judge bench observing that serious and wide ranging implications of the issue fall for determination. The nine judges bench did not sit to consider this case after this order. However, in 2019, an interlocutory application in a connected case was disposed by a two judge bench.

In this case, the nine judge bench will be considering the following questions referred to it in 2011:

A connected matter had come up before a three judge bench in April, this year.

The 9-judge bench was constituted by the Supreme Court to consider the issues mentioned in the Sabarimala review order. On November 14,2019, a 5-judge bench headed by the then CJI Ranjan Gogoi observed by 3:2 majority that certain issues in the Sabarimala review were common to the pending cases concerning women entry in Mosques, validity of the practice of Female Genital Mutilation among Dawoodi Bohra community and the right of Parsi women who had married outside community to enter Fire Temples. This order also listed some issues which, according to the majority, "could" arise for consideration by a larger bench. Later the nine judge bench, which heard the case on preliminary issues, re-framed these issues. They are:

The nine judge bench also dismissed the objections regarding the maintainability of reference. Recently, the court issued notice in a plea filed for protection of rights of Parsi women, challenging ostracisation of a Parsi Zoroastrian and her offspring on the grounds of her marriage to an individual of a different lineage, race or religion. The bench observed that the question involved in the said matter is one of the points which is covered in the Sabarimala Reference.

There have been 15 nine-judge bench decisions in the history of Supreme Court. The judgment in Justice K.S. Puttuswamy (retd) v. Union of India is the latest decision (2017) by a nine judges bench in which it was unanimously held that the right to privacy is a fundamental right protected under the Constitution of India. In 2016, in Jindal Stainless Ltd. & Anr. v. State of Haryana, the court, by a majority of 7:2 majority upheld the validity of the entry tax imposed by States on goods imported from other States. It was held that the word 'Free' used in Article 301 does not mean "free from taxation".

Here is a list of 13 other landmark decisions by nine-judge benches in the history of the Supreme Court (in chronological order).

In 2019, it was reported that the Court might be setting up a permanent five-judge Constitution bench, to be available round the year to adjudicate complex constitutional questions and interpret laws. But there has been no development thereafter, perhaps due to the advent of Covid-19 pandemic in March 2020. Now since the supreme court is working with 33 judges and started physical hearings, time has come to soon dispose of the larger bench matters (nine and seven judges bench matters) and to constitute a permanent five judge 'Constitution Bench'.