In The Name Of TRIPS Waiver 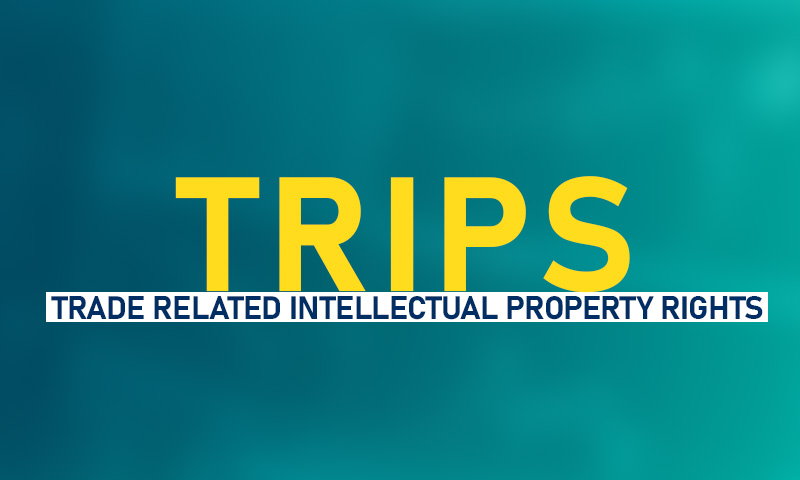 In October 2020, India and South Africa submitted a proposal to the TRIPS Council, WTO, to waive certain obligations under the TRIPS Agreement. The adoption of this waiver would lead to temporarily suspend certain obligations to protect intellectual property (IP) and its enforcement as mandated by the TRIPS Agreement. This waiver was seen as a need of the hour to overcome the IP barriers...

In October 2020, India and South Africa submitted a proposal to the TRIPS Council, WTO, to waive certain obligations under the TRIPS Agreement. The adoption of this waiver would lead to temporarily suspend certain obligations to protect intellectual property (IP) and its enforcement as mandated by the TRIPS Agreement. This waiver was seen as a need of the hour to overcome the IP barriers to scale up the production of vaccines and other medical products to effectively combat COVID19 pandemic. This would enhance the availability and make better the affordability of vaccines and other medical products.

A WTO secretariat led negotiations among four members viz. EU, US, South Africa and India, known as 'quad' process reportedly reached a compromise text. The two-year long struggle of developing countries for a 'TRIPS Waiver' is plausibly coming to an end; unfortunately, it is not a moment of triumph. The leaked quad text is based on an EU proposal of 2021 relying on compulsory license. The USTR stated that agreement on the text is to be reached. Similarly, the statement of WTO Chief also hinted that the details of the deal is yet to be ironed out. Though there is no endorsement of the text from South Africa and India till date, many WTO watchers believe that it is unlikely to be reopened in the absence of intervention from the highest political authorities of the respective countries.

A reading of the text shows that India and South Africa have succumbed to the pressures of the global north countries and agreed for a truncated and narrow waiver proposal. This leaked text now only covers vaccines and limits eligible members to 'developing country Member that exported less than 10 percent of world exports of COVID-19 vaccine doses in 2021'. The idea of limiting the waiver to countries who have exported less than 10% of vaccines is a targeted effort against China and this is a blunder in itself.

The developing countries, and for that matter even developed countries also, heavily depend on the manufacturing capabilities of India and China and limiting the benefit from them shall in effect limit the benefit intended from the waiver. Now, with respect to developing countries, the waiver will be in places where it cannot be executed effectively. One of the major expected outcomes was to propel the development of medical products' manufacturing and last mile capabilities of developing countries, and this can happen only where there is a minimum infrastructural capability and know how. Further, China, unduly, are going to lose their fair opportunity to better their infrastructural capabilities only because they rose to the occasion and answered the call of countries during pandemic.

The proposed solution in the leaked text limiting itself to vaccines while the revised Waiver Proposal covered vaccines, diagnostics and therapeutics along with materials and complements for the production of the same. It is important to remember that the pandemic is yet to end and vaccines at the best has proven to be an effective band aid to an immediate crisis because vaccine is not preventing the infection but only reducing the severity of the infection. Therapeutics are highly required and unfortunately it is out of the proposed solution now.

According to the leaked text, "No later than six months from the date of this Decision, Members will decide on its extension to cover the production and distribution of COVID-19 diagnostics and therapeutics". At the best, the same list of negotiations and deliberations that happened for the last two years would probably repeat. It is important to remember several primary and secondary patents have either been filed or granted on therapeutic interventions to COVID. This is very well in the interest of global north because by then all downstream manufacturers would be tied up with exclusive licenses or such other regressive contractual obligations.

Further, the leaked text shows that there is no waiver of IP rights, but contains only a few clarifications on Art 31 of the TRIPS agreement. The text forgoes procedures such as consultations in exercising the Art 31 during emergencies, but this is an already existing provision under Article 31 (b) of the TRIPS Agreement. There is no need for a waiver in this regard.

Art 31(b) states "such use (use without authorization of patent holder) may only be permitted if, prior to such use, the proposed user has made efforts to obtain authorization from the right holder on reasonable commercial terms and conditions and that such efforts have not been successful within a reasonable period of time. This requirement may be waived by a Member in the case of a national emergency or other circumstances of extreme urgency or in cases of public non-commercial use…".

A simple reading of the said clause shows that the member-states have the flexibility to waive off the 'authorization on reasonable commercial term's requirement on account of 'national emergency or other circumstances of extreme urgency or in cases of public non-commercial use.' The pandemic, covers in all interpretation, as a health emergency and therefore the exemption of 31(b) is obvious. The waiver was proposed not for securing reassertion of the flexibilities.

Interestingly the leaked text also imposes new obligations on countries that do not presently exist in Art 31. This makes Art 31 more restrictive and burdensome and it is directly against fundamental reason to demand waiver which is the cumbersome procedural requirements in exercising the flexibilities under the provision.

Paragraph 3(a) of the documents puts added administrative requirement of listing all the patent and curbing the prospect of any subject or area wise immediate exemption of patent rights as the time demands. Also, the footnote 4 of the paragraph 5 in the document puts international monitoring of state affairs in the name of "transparency", again an added new condition making Art 31 way above the original TRIPS standard. The provision requires member-states to provide a detailed report including (a) the name and address of the authorized entity; (b) the product(s) for which the authorization has been granted (c) the duration of the authorization; (d) the quantity(ies) for which the authorization has been granted; (e) the country(ies) to which the product(s) is(are) to be supplied; in other words, it has all the administrative encumbrances as that of a compulsory license and the Art 31bis.

Above all, the proposed solution has been positioned exclusively for vaccine patents. It conveniently avoids any discussion on trade secrets and its common knowledge about the role of trade secret in production of vaccine. Trade secrets largely constitutes manufacturing methods, unpatented medical formulae, genomic information, cell lines and other biological materials. Hence, the proposed compromise is a superfluous attempt towards a solution and an efficient attempt to compromise existing flexibilities.

In short in proposing for an easiness in addressing IP barriers now the compromise, reached by India and South Africa with the EU and the U.S, compels developing countries to comply with sked solution with additional conditions that go beyond the TRIPS Agreement. This compromise undermines the health of every soul in developing countries not only during pandemic but also otherwise, setting a bad precedent. There is still time for India and South Africa to remind themselves the initial goals and aspiration when they took leadership of developing countries with their fight for TRIPS waiver. i.e. to create an opening easy and equitable access to strategic information, technology and foundational knowledge to produce all medical products required for COVID19 response. To create a policy space to act fearlessly as the time demands.

The author is Asst. Prof. of Law, Christ (Deemed to be University) at Delhi NCR. Views are personal.