Why Justice Arun Mishra's Non-Recusal Is A Problematic Precedent? x
The order has considerably diluted the golden principle that "Not only must Justice be done; it must also be seen to be done."

Regarding the test of likelihood of bias, Justice M Venkatachalaiah observed in Ranjit Thakur v Union of India (1985) :"As to the tests of the likelihood of bias what is relevant is the reasonableness of the apprehension in that regard in the mind of the party. The proper approach for the judge is not to look at his own mind and ask himself, however, honestly. "Am I biased? "but to look at...

Regarding the test of likelihood of bias, Justice M Venkatachalaiah observed in Ranjit Thakur v Union of India (1985) :

"The ultimate test is that it is for the Judge to decide and to find out whether he will be able to deliver impartial justice to a cause with integrity with whatever intellectual capacity at his command and he is not prejudiced by any fact or law and is able to take an independent view".

As clear from the above quotes, the Justice Arun Mishra's decision to not to recuse from the Indore Development Authority case shifts the vantage point regarding the test of judicial bias.

The time-honored principle followed across several jurisdictions is that the perception of the litigant is the material factor for determining judicial bias. What is material is not the actual existence of bias; but the reasonable apprehension in the mind of the litigant regarding the likelihood of bias.

Inverting this well settled principle, Justice Arun Mishra stated that the test should be based on the self-perception of the very same judge, whom the party is apprehending to be biased. In other words, self-attestation by the judge is sufficient.

It appears the actual controversy was not properly acknowledged by Justice Mishra's order. This is clear from the question framed in paragraph 11 :

The first question before us is whether a Judge who has expressed an opinion in a smaller Bench and the case has been referred to a larger Bench, because of the conflict of the opinion or otherwise, can hear the matter in a larger bench.

This is a highly polished, sanitized version of the real question, which ought to have been - whether a judge, who played a central role in creating the judicial controversy regarding Section 24(2) of the new Land Acquisition Act by first doubting a three year old precedent and later overruling that precedent as per incuriam (ignoring the principle of stare decisis), should head a constitution bench formed to decide the correctness of the view expressed by him.

Brief history of the case

The underlying issue, in broad terms, was whether deposit of compensation by government in treasury can be deemed as payment to landowner as per Section 24(2) of the 2013 Land Acquisition Act so as to save the proceedings taken under the 1894 Land Acquisition Act from being lapsed.

In 2014, a three judge bench in Pune Municipal Corporation case held that in case land owners are not willing to accept the compensation, the same has to be deposited in Court. Mere deposit of compensation in treasury cannot be regarded as payment as per Section 24(2), added the bench.

This view held field for nearly over three years, until a two judges bench headed by Justice Arun Mishra doubted its correctness in December 2017 and referred it to larger bench.

The larger bench (a  three judge bench) which considered the reference was notably headed by Justice Arun Mishra. This three judge bench (by 2:1 majority) held the decision in Pune Municipal Corporation to be per incuriam, ignoring the principles of stare decisis and judicial discipline that a bench cannot overrule a decision laid down by another bench of equal strength.

Another three-judge bench took objection to this course adopted by Justice Arun Mishra-led bench, and stayed the operation of Indore Development Authority case.

It was only after this that a two-judge bench headed by Justice Arun Mishra thought it fit to refer the issue to the CJI for determination by a larger bench.

As can be seen from these developments, Justice Arun Mishra is the central protagonist of the whole controversy. He has consistently doubted the view in Pune Municipal Corporation case and has gone to the extent of declaring it a bad law.  In this backdrop, certain parties felt that the participation of Justice Mishra in the bench - which is formed to decide the correctness of Pune Municipal Corporation and Indore Development Authority cases - should be avoided.

To say that the issue was merely whether a judge, who has expressed a view in a smaller bench, can be a part of a larger bench which reconsiders that view, is a deceptive simplification of the background and context of the real issue.

The answer found by Justice Mishra to the question formulated by him - "A Judge who had rendered any decision in a smaller combination is not disqualified from being part of a larger Bench when a reference is made to the larger bench" - is therefore diversionary.

The order has cited several instances of judges overruling their own judgments as part of larger benches. As explained by lawyer and constitutional scholar Guatam Bhatia in this article, none of those cases are comparable to the PMC-IDA imbroglio.

The order, quite conveniently, skips discussion on the fact that there is no comparable precedent for the situation of Justice Arun Mishra in the land acquisition bench.

This justification, like a red herring, turns ones eye from a major point.

Justice Mishra did not simply doubt the correctness of 2014 decision and refer it. Instead, the bench headed by him had robbed that judgment of its precedential value by declaring it a bad law.

A reading of the reference order of Justice Mishra-led bench passed on Feburary 22, 2018 shows that the order passed by Justice Lokur-led bench just a day before was the reason for making the reference. 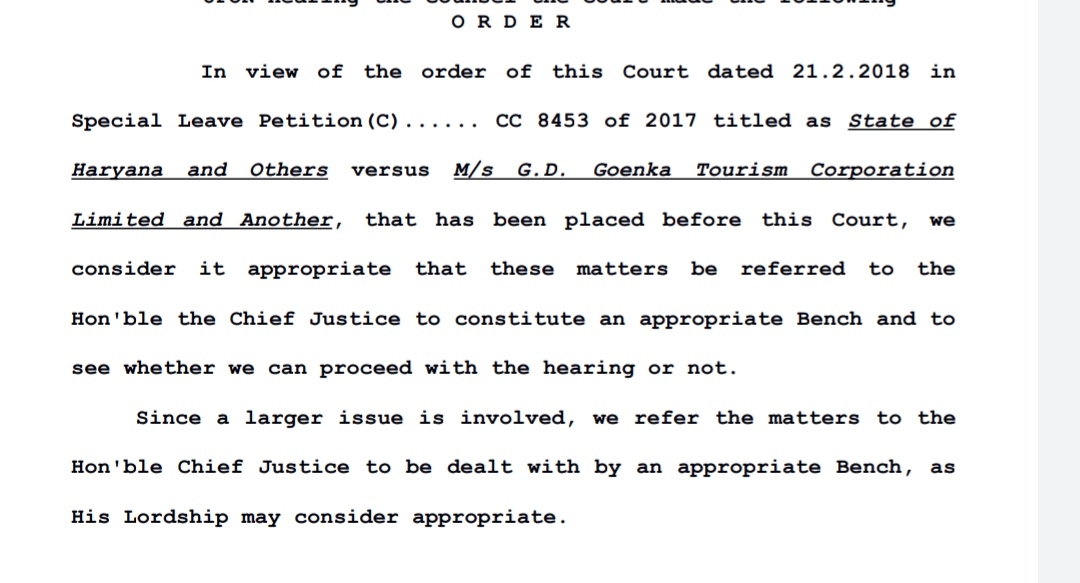 Therefore, comparison of this case with situations of judges who have referred a matter participating in larger bench dealing with the reference may not be appropriate. Because, a judge is yet to make an authoritative pronouncement on the issue while making a reference. But in case of Justice Mishra, he made the reference only after his authoritative pronouncement on Section 24(2), which overruled a binding precedent, became controversial.

Can this statement be taken as an absolute truth, which will hold good in all situations? If that be so, why do we not have single bench judges in division benches hearing the appeals against their own judgment?

It is against basic judicial sense to have judges participating in appeals against their own judgments.

Justice Mishra's order gets over this issue by reasoning that the Constitution Bench is not an appellate bench :

"The decisions and rules relating to the appeal against Chamber Judge are not at all relevant. There is no appeal within the Supreme Court. It has a totally different structure, and has its own corrective mechanism, need not be gainsaid."

Technically, the reference before the Constitution Bench is not an appeal. However, do they not have the effect of an appal, since the CB will decide the correctness of Indore Development Authority and Pune Municipal Corporation decisions?

More direct answers on this issue can be found from a judgment, which was mentioned in Justice Mishra's order.

"...an essential requirement of judicial adjudication is that the Judge is impartial and neutral and is in a position to apply his mind objectively to the facts of the case put up before him. If he is pre- disposed or suffers from prejudices or has a biased mind, he disqualifies himself from acting as a Judge."

Though this paragraph was extracted in the judgment, the principle discussed in it was not applied in the case.

In fact, if the ratio of the Shivananda Pathak was directly applied in the case, recusal of Justice Arun Mishra would have been an inevitable consequence.

In that case, "judicial obstinacy" was treated as a form of "bias". This judgment is an unequivocal precedent which negates the finding of Justice Mishra that previous judgment cannot constitute bias.

There, a judge of Calcutta HC, Justice Ajit Kumar Sengupta, while being in a single bench, had ordered promotion of few employees with effect from a particular date. That order was set aside by division bench in appeal. Two years later, the same persons, filed another writ petition for payment of arrears. This petition happened to come before Justice Sengupta, who was then heading a division bench.  While allowing the petition, Justice Sengupta allowed the relief of promotion also, which was earlier set aside by another division bench.

Finding fault with the course adopted by Justice Sengupta, the SC observed :

"we are constrained to observe that it was not competent for Mr. Justice Ajit Kumar Sengupta to have presided over the Bench in which the impugned judgment was passed as he had already expressed his opinion in the earlier writ petition which was over-ruled. He should have disassociated himself from that Bench in keeping with the high traditions of the institution so as to give effect to the rule that "justice should not only be done, it should manifestly be seen to have been done" apart from sitting in appeal, though collaterally, over his own judgment."

A judge should not be sitting in appeal, even collaterally, over his own judgment - this is the principle deductible from this precedent.

"It is well settled law that a person who tries a cause should be able to deal with the matter placed before him objectively, fairly and impartially. No one can act in a judicial capacity if his previous conduct gives ground for believing that he cannot act with an open mind or impartially"

Unfortunately, Justice Mishra's order, instead of applying these principles, discredits the plea for recusal as an attempt at bench-hunting.

The order has considerably diluted the golden principle that "Not only must Justice be done; it must also be seen to be done". Its application as a precedent is therefore deeply problematic.