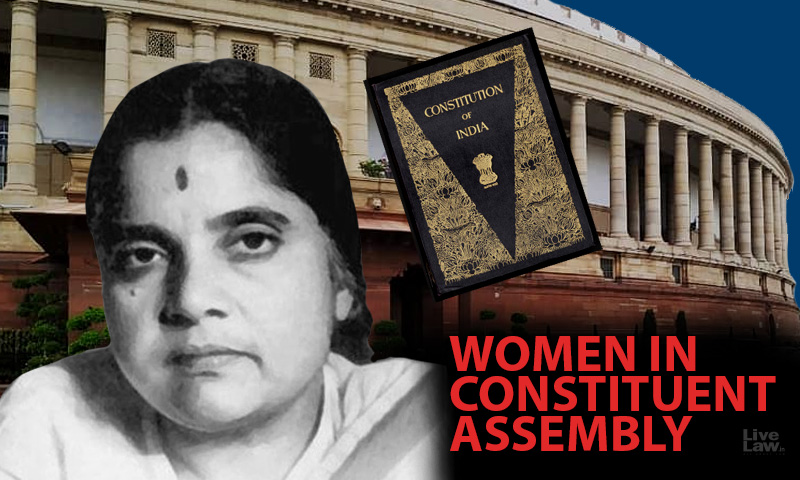 15th July 2020 marks 111th birth anniversary of G. Durgabai. In this piece, I attempt to provide a glimpse into the wide-ranging interventions of the most active woman member of the Constituent Assembly.

Born on 15th July 1909 in Rajahmundri, Kakinada, G. Durgabai participated in the freedom movement since her early childhood. At the age of 12, she quit school to protest imposition of English as medium of education and at the age 14, she volunteered at Indian National Congress's conference in Kakinada. Later she studied at Benaras Hindu University and Waltair and Law College, Madras and practiced law at Madras High Court and Supreme Court of India.[1] She joined Constituent Assembly on 9th December 1946 from Madras.

The Most Active Woman Member-

She spoke on wide range of issues from film censorship to judiciary (some of which discussed below). She was member of the Rule Making Committee (the only woman member). She spoke most regularly as member of this committee and introduced various proposals for effective functioning of the Constituent Assembly. She was also member of Steering Committee of the assembly.

Recognizing her important role, Granville Austin is his seminal work on Indian Constituent Assembly counted her in his list of the '21 most important figures of the assembly'. However in a rather sexist manner he referred to her as 'Wife of C.D. Deshmukh' in her 'After Constituent Assembly Introduction'. [2]

On Judiciary: Her Most Frequent Interventions

Apart from intervening on range of occasions on rules of working of Constituent Assembly, the second most frequent theme where she intervened was judiciary and judicial administration. Herself a lawyer, she spoke on following issues related to judiciary-

The issue of prostitution (or rather sex work) is highly debated within the feminist discourse marked by the victim- agent dilemma i.e. when are women to be considered victims needing protection and when do women stand as active agents negotiating with power and carving out their own spaces.[8] However Constituent Assembly discourse saw sex workers only as 'women at the mercy of their exploiters'[9], who needed to be 'saved' and 'rescued'. Deshmukh along with her other women colleagues debated the question of sex work only within frame work of trafficking and forced labour under Ar. 23 of the Constitution.

Prof. K.T. Shah moved an amendment to Ar. 23 of the Constitution suggesting that dedication of young women to Devdasis in temples shall be specifically prohibited through Ar. 23. Durgabai supported Shah's position, and expressed her gratitude to him for his proposal. Although she advised him that since specific legislation had already been passed in Madras, there was no need for a categorical provision to abolish the Devdasi system in the Constitution. [10]

This is in continuation of the mainstream feminism during the freedom struggle where mainstream feminists aimed at 'rescuing' sex workers and providing them with alternative shelters.[11] In this abolitionist zeal of Durgabai and her woman colleagues there was no recognition of sex workers and their agency. In fact, Forbes records that during the freedom struggle itself, sex workers themselves had resisted the reformer's overtures of mainstream feminists. [12] However, invoking spiritual superiority of Indian women, Durgabai and her colleagues saw sex work against the duty of women in upholding moral standards.[13] Few years later Durgabai was 'aghast' at a petition in Allahabad High Court by one sex worker named Husna Bai who argued for her "right to carry on prostitution or the business of brothel keeping" as her fundamental right under Ar. 19.[14]

Durgabai also intervened in debates around fundamental right. The three rights she primarily spoke on were Ar. 22, Ar. 25 and Ar. 32.

On 16th September 1949, the Constituent Assembly debated Ar. 15-A of the Draft Constitution (Ar. 22 of the current Constitution). The article faced serious criticism from the members of the house for its wide power of preventive detention and anti-liberty stand. One of the members Shri Jaspat Roy Kapoor argued that the chapter on fundamental rights should be re named as "Limitations on Fundamental Rights" Another member referred to preventive detention powers under Ar. 22 as 'crown of failure'. [15] However Durgabai sided with the position of Drafting Committee a 'very happy compromise' and argued that Ar. 22 is in fact an improvement over pre-constitutional public security acts.

On another occasion, she moved an amendment to Ar. 25 and argued that the words 'any class or section' under sub-clause (b) of clause (2) of. Ar. 25 should be replaced with 'all sections and classes'. The aim of her proposal was to enlarge the scope of social reform and welfare under the Article. She argued that there are various classes of religious institutions run by Hindus. Thus the clause should not be limited to temples, it should also cover maths, religious pathshalas, and educational institutions run by Hindus. [16]

Indian Constituent Assembly saw various instances of sexism and sexist comments against women members in the assembly. G. Durgabai was no exception to it.[18]

On 15th October 1949, G. Durgabai, as member of the Rule Making committee, moved certain proposals for addition of new rules to the Constituent Assembly rules. Naziruddin Ahmad, upset with the rules argued against them and added that,

"a further difficulty has been placed by the Drafting Committee on the Members in that they have selected a lady Member to propose all these difficult rules."

He further went on,

"the method followed by the Drafting Committee is like that of the Communists who fight with ladies at the front, so as to make it impossible for the other party to strike… The difficulty is that we cannot be hard upon her. After all some kind of gracefulness is necessary in dealing with a lady member. The fact is that the Drafting Committee has put a lady member to fight their cause."

His comments mark a classic sexist instance where a woman is not seen strong enough to be sent in front to defend a position; rather she is seen as 'other' in the fight between men. The stereotypical assumption is that it is not a war, a business for woman; it is the issue between two men who need to fight it out themselves rather than sending a woman.

His language did not draw much flak from the members. Later in her response, Durgabai herself questioned the comments of Ahmad and expressed her regret that male members of the house were still conscious of 'sex business' though the women Members had completely forgotten it. She added that she very much wished that there should be no longer any talk of 'this question of men and women' in the assembly.[19]

Apart from the above mentioned issues, she also spoke on the question of language,[20] question of film censorship,[21] protection of children from abandonment,[22] financial implications of declaration of Emergency,[23] etc. Thus, G. Durgabai was one of the leading voices of Constituent Assembly of India. Her role in the assembly continues to impact lives of women today. From sex work to her approach on preventive detention, critical engagement with her stands is warranted.

(Surbhi undertook her LL.M. Dissertation research on feminist critique of Indian Constituent Assembly. She taught the same as seminar course at National Law University, Delhi in Autumn semester 2020. She can be reached at [email protected])

[10] In fact one member-T.T. Krishnamachari argued that it would be blot on fair name of India if provisions are made for such abuses in the Constitution instead of a legislation. See- Constitutional Assembly Debates (Proceedings) - Volume VII, LOK SABHA (Dec. 3, 1948), http://164.100.47.194/loksabha/writereaddata/cadebatefiles/C03121948.html

[14] ROHIT DE, A PEOPLE'S CONSTITUTION: THE EVERYDAY LIFE OF LAW IN THE REPUBLIC 170 (Princeton University Press 2018).