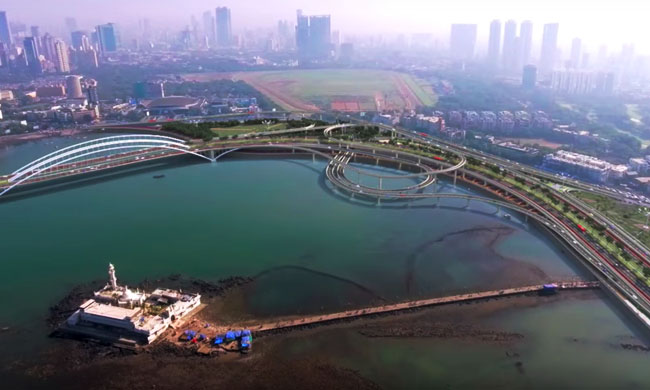 x
'Make sure the livelihoods of the fishermen are not effected', CJI said during hearing.
Your free access to Live Law has expired
To read the article, get a premium account.

The CJI-led Bench of the Supreme Court on Tuesday heard a plea by the Conservation Action Trust (CAT) and Shweta Wagh, founder of Collective for Spatial Alternatives today, seeking a stay on the ongoing reclamation work of the Brihanmumbai Municipal Corporation's (BMC) coastal road project between Worli sea face & the Worli end of the sea-link.

Senior Advocate Shyam Divan appeared on behalf of the Applicant(s) & asserted that the ongoing reclamation work being done by the authorities surpassed the earlier order of the Supreme Court in order dated 17th December 2019 which had in affect insinuated a curb on carrying out any development work.

Pointing to a Google map which earmarked the coastline surrounding the roadwork's area, Divan contended that the authorities had been frantically carrying out activities without paying much heed to the coastal ecology.

While claiming that extending the area required for carrying out works was in contravention of the Supreme Court's orders, Divan argued that rapid reclamation was causing irreversible damage to the environment.

At this juncture, Senior Advocate Mukul Rohatgi & Solicitor General Tushar Mehta interjected and stated that no such contravention of the orders of the Supreme Court was taking place.

"Do they expect us to carry out development in the road works by standing at sea?" said Rohatgi, denying the claims of the Applicant.

CJI SA Bobde allowed the Respondent(s) to file their reply to the said application, without passing any other directions and listed it on 5th of March 2020.

An Intervenor also appeared during the hearing stating that the interests of Fishermen operating at the designated coastline must not be affected during the execution of the ongoing reclamation work.

Taking note of this, CJI SA Bobde responded, telling Counsel for the Respondent,

"Make sure the livelihoods of the fishermen are not effected"

In July Last year, the Bombay High Court had quashed the Coastal Regulation clearances granted to the coastal road project on account of numerous irregularities, which had been overlooked by the Maharashtra Coastal Zone Management Authority.

Subsequently, admitting an appeal of the Municipal Corporation, the Supreme Court had stayed the Bombay High Court Judgment on 17th December 2019 and allowed the Authorities to reclaim the land and build the road in the designated area.

While doing so, it had however disallowed carrying out any other development work until further orders and had listed the matter on 8th April 2020.