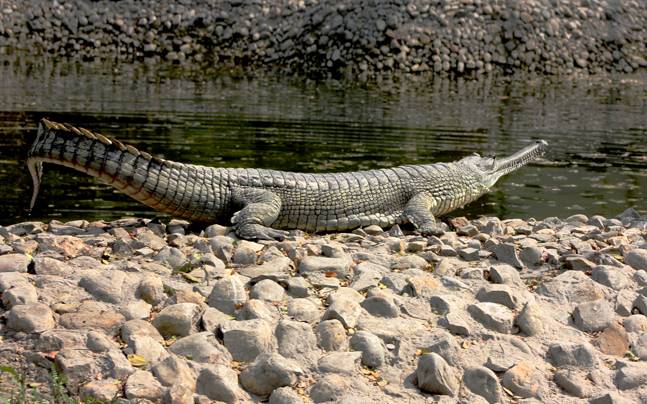 NGT has directed the state authorities of Madhya Pradesh to take effective steps for the conservation of the Son Gharial Wildlife Sanctuary in the Sidhi district of Madhya Pradesh and submit the report in three weeks.

A plea was filed by one Nityanand Mishra in 2014 for the protection of Gharial population from the unregulated sand mining in the in the area of 200 km stretch of Son River, which is where the Gharial sanctuary lies. Nityanand's application showed that the enforcement staff of the Forest Department had failed to check the same, relying upon the photographs and RTI information to show that no sanction was granted for the sand mining.

The Bench while hearing the plea had observed that according to the International Union for Conservation of Nature's (IUCN) data, the Gharial population declined by a whopping 96-98%, and the Indian government had also listed it as Protected species by wildlife protection act 1972. The concerned state authorities, including the M.P. Pollution Control Board, had however denied any adverse impact on the water quality of River Son.

After considering the various proceedings that took place over 4 years, since 2014, the Bench was of the view that 'strong continuous measures' were necessary for the protection of the endangered species. To ensure the conservation of Gharials, the NGT, Central Zone Bench had directed the constitution of a Committee consisting of representatives from Indian Institute of Forest Management, Bhopal, Wildlife Institute, Dehradun, Indian School of Mines, Dhanbad, and the Ministry of Environment, Forest and Climate Change (MoEF & CC). the Committee was given the task of preparing an action plan for the object of checking illegal mining in the son Gharial Sanctuary, in order to ensure the conservation of the endangered Gharials.

The Green Tribunal, Central Zone Bench, asked the Committee to submit its report to the Tribunal after three months of working, and directed the District Administration to provide adequate police force to check illegal mining and protection of the wildlife in the area of the sanctuary. The application was thus, disposed of on 31.07.2018, with the orders to consider the Committee's report in February 2019.

When the report came up for consideration, the Bench headed by Justice Raghuvendra S. Rathore, JM observed that the report was however submitted by the Committee in February 2019, as opposed to the expected time frame of October 2018, as had been directed by the Tribunal in its july 31st order. Even so, the NGT, Central Zone Bench observed that the report was expected to give progress in respect of the action taken in respect of the illegal mining activity, and not simply file a status report of the work to be done by the various departments. The Bench held that such a status report did not give any clarification as to the action taken so far, and what remained to be done.

In view of the aforesaid developments, the Tribunal has directed that the Madhya Pradesh State Government to ensure that all the related departments mentioned in the report of the Committee, filed their separate progress reports. These reports must show the steps taken to execute the action plan, and must be submitted within 3 weeks.

The matter will now be heard on 10th October, 2019. The NGT Bench has also directed the Chief Wildlife Warden, Government of Madhya Pradesh to remain present for the next hearing.

TO READ THE PREVIOUS ORDER PASSED IN JULY 2018, CLICK HERE.