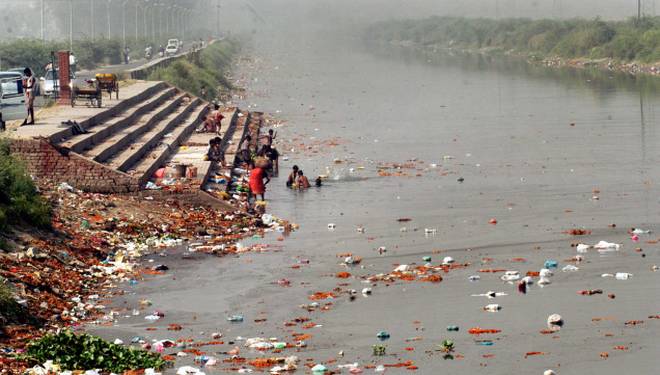 The NGT Principal Bench has directed the UP Government (through Chief Secretary) to look into the issue of pollution in Kali Nadi, Krishni and Hindon Rivers on a plea that it has resulted in the death of 71 people from cancer, and caused over 47 people to be bed ridden.

The plea was filed by NGO Doaba Paryavaran Samiti, praying for remedial measures for the pollution in these rivers, resulting in diseases and deaths of inhabitants in nearby areas in Western UP.

A site inspection took place after the plea was filed, which brought to light that pollution from industries had caused major losses to health of the inhabitants. Initial studies of the matters showed that more than 71 people had died from cancer, more than 47 persons were bed ridden, and more than 1000 people were affected by diseases in nearby areas of he rivers in Western UP.

A Committee formed pursuant to the directions of the Tribunal in 2018 carried out a survey by testing samples of the alleged polluted rivers. The Committee found that there was contamination of ground water, and 124 industries were not meeting standards in terms of adopting measures to curb pollution. Following such a report, a Monitoring Committee to be headed by Justice S U Khan (formed Allahabad HC judge), was formed to prepare time bound action plan to deal with the problem.

The Monitoring Committee in its report submitted in February 2019, recommended immediate implementation of the action plans by State authorities of Uttar Pradesh, as per the time lines specified therein. The report also placed on record that the State authorities were not cooperating with the Committee, despite clear directions by the NGT.

The Principal Bench, after considering the report, had expressed its displeasure at the lackadaisical attitude of the State of UP, and had asked the State authorities to furnish a performance guarantee of Rs. 5 crores, to the effect that action plan will be implemented.

The matter was again taken up in July 2019 when Justice S U Khan sent a letter to the NGT expressing his inability to continue with the position. He was relieved from the assignment, but the Tribunal directed the Chief Secretary, UP to suggest a credible mechanism to be adopted so as to deal with the issue in hand. The Tribunal asked for a status of execution of action plan with the budgetary provisions and specific timelines.

As the matter came up before the NGT Bench in the last hearing, it was observed that a compliance report was filed by the State authorities, but there were major loopholes in the report. The report made no mention of the quality of water provided by the existing hand pumps, except for that about 1088 hand pumps providing contaminated water, were uprooted. In addition to this, although the report showed a large number of serious patients, many being cancer patients, but no remedial action for their betterment was mentioned.

With reference to remedial action for treatment of sewage gap in River Hindon, the report showed laches on part of the authorities to establishment of Sewage Treatment Plants (STP). The Tribunal was of the view that there was no justification for such a long delay in completing projects of such an urgent nature, and the continuing discharge of untreated sewage is a criminal offence under the Water (Prevention and Control of Pollution) Act, 1974.

It was observed that in spite of repeated directions by the Tribunal over a long time, the DPRs are still at the approval stage, and work of such urgent nature as, supply of clean water in the area where large number of deaths and diseases have taken, was still pending.

The Tribunal has called for appropriate action to be taken against the persons who delayed the DPRs, and those who violated NGT's order requiring furnishing of the performance guarantee without any valid reason. The Bench observed that the whole process needed to be supervised by the Chief Secretary till an alternative credible mechanism is established and effective action is taken.

With the aforesaid observations, the Tribunal directed the Chief Secretary, UP to take action against erring officers and ensure further remedial action is taken to ensure supply of clean water to such villages.

The matter will be heard next on 21st October 2019 and the Chief Secretary has also been asked to be present for the next hearing.