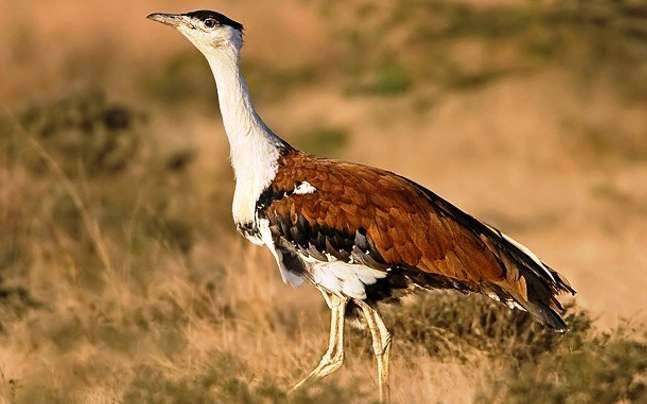 In relation to protection of the Great Indian Bustard, the Supreme Court on Friday(April 1) directed the High Level Committee constituted by it last year to examine the feasibility of under-grounding of over-head power lines, to submit a status report in three weeks. The Court has directed States of Rajasthan and Gujarat to file status report regarding compliance with court's...

In relation to protection of the Great Indian Bustard, the Supreme Court on Friday(April 1) directed the High Level Committee constituted by it last year to examine the feasibility of under-grounding of over-head power lines, to submit a status report in three weeks.

The Bench indicated that it may constitute a broader based committee with experts from field of environment, power, transmission etc to conduct studies on overall basis instead of case to case basis.

The Bench asked the Counsels to come to come back to the court with a proposal of what a broader based committee should consist of and suggest the constitution of the committee.

A bench comprising Justice DY Chandrachud, Justice AS Bopanna and Justice V Ramasubramanian was considering two applications filed in the matter including an application by the Union of India seeking modification of the judgement dated 19th April 2021 and an application filed by the petitioner seeking directions to Committee to file a status report.

The applications have been filed in a PIL filed seeking protection of Great Indian Bustard which is on the verge of extinction. The Supreme Court through its order dated 19th April 2021 had constituted a Committee and ordered that the recommendations of the committee shall be implemented by power-generators and other stake-holders.

The Committee constituted by the Ministry of Renewable Energy and Ministry of Power provided its analysis of implementation issues- including environment amd economic issues arising out of court's orders.

The AG submitted that the Study team constituted has undertaken detailed studies to understand the working of over head power lines and the technical challenges that exist. One of such challenges is the fact that underground cables have to be insulated and that is not available anywhere in the world so it is not possible to underground them without insulation.

The Bench observed that what prima facie appears is that committee constituted by the Supreme Court is a narrow committee, and there has to induction of experts who have knowledge of scientific and safety aspects and environment knowledge.

According to Justice Chandrachud, even for the court to consider if modification of the order is necessary or not it needs a scientific assessment for its own, factor in feasibility, cost safety, budgeting and alternate integrative measures that can be adopted to form a balance.

Senior Advocate Shyam Divan appearing for the petitioner, while opposing the prayer for modification of Supreme Court's judgement submitted, that court's decision was a landmark decision to protect the magnificent Great Indian Bustard.

"Please recall it is a bird on brink of extinction and it can't happen on our watch. The judgement notes it is the heaviest bird capable of flying." Mr Divan said

Mr Divan further submitted that the petitioner has filed an application seeking directions to the court constituted committee to file a status report in one month and direct the States of Rajasthan and Gujarat to file status report too.

According to Mr Divan, as far as future is concerned, no future transmission lines can be installed in these participating zones which are priority zones. However, according to several news reports, new lines are coming up in that area. He added that directions need to be issued to restrain the States from installing new power lines.

He added that the committee which the court set up is for a limited purpose. After considering the relevant issues and wildlife institute reports, undergrounding was mandated as the best option. However the court realised it may not be possible in some cases, and the committee was allowed to grant exceptions.

Background: The Supreme Court had on 19th April 2021 passed its judgement issuing directions for to protection of Great Indian Bustard from extinction.

A bench comprising Chief Justice SA Bobde, Justices AS Bopanna and V Ramasubramanian passed the order in the case M K Ranjith Singh and others v Union of India.

"In all cases where the overhead powerlines exist as on today in the priority and potential GIB area the respondents shall take steps forthwith to install divertors pending consideration of the conversion of the overhead cables into underground power lines. In all such cases where it is found feasible to convert the overhead cables into underground power lines the same shall be undertaken and completed within a period of one year and till such time the divertors shall be hung from the existing powerlines", the bench ordered

The Committee constituted of the court had the following as members :

The Court suggested using of CSR Funds or the funds under the Compensatory Afforestation Fund Act, 2016 (CAF, 2016) for the purposes.

"Irrespective of the cost factor the priority shall be to save the near extinct birds", the Court said.

"...there cannot be disagreement whatsoever that appropriate steps are required to be taken to protect the said species of birds.In that view, insofar as the existing overhead powerlines are concerned the respondents shall take steps forth with to install divertors and in respect of existing overhead power lines all future cases of installing the transmission lines a study shall be conducted with regard to the feasibility for the lines to be laid underground. In all such cases where it is feasible, steps shall be taken to lay the transmission line underground. For the lines to be laid in future if as per the technical report the overhead line alone is feasible and the same is ratified by the Committee, in such event the installation of the divertors shall also be a condition attached in the contract to be entered with generating companies", the Court observed.

The petitioners, who were environmentalists, pointed out that collision with power lines was the major cause of casualty for GIBs. Study Reports concluded that unless power line mortality is mitigated urgently, extinction of GIBs is certain.