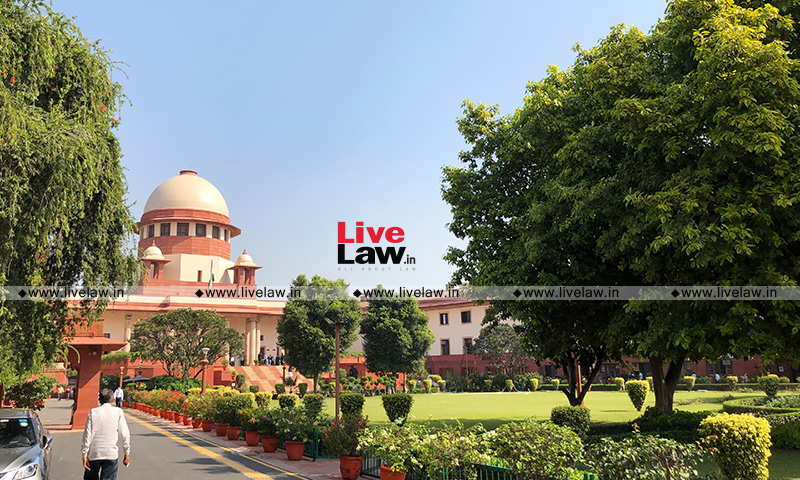 Responding to a contention that the twelve-member expert Committee appointed by the National Green Tribunal ("NGT"), to oversee that mitigation measures are effectively implemented by NHAI, lacks independent experts, the Supreme Court, on Friday, asked the Solicitor General of India and the Counsel appearing for Citizens for Green Doon, Mr Ritwick Dutta to provide a list...

Responding to a contention that the twelve-member expert Committee appointed by the National Green Tribunal ("NGT"), to oversee that mitigation measures are effectively implemented by NHAI, lacks independent experts, the Supreme Court, on Friday, asked the Solicitor General of India and the Counsel appearing for Citizens for Green Doon, Mr Ritwick Dutta to provide a list of independent individuals or institutions who can be inducted into the said Committee.

A Bench comprising Justice D.Y. Chandrachud and Aniruddha Bose were hearing a plea, assailing the order of the NGT dated 13.12.2021 in relation to the Delhi-Dehradun expressway. The challenge before the Tribunal was to the validity of diversion of forest land for non-forest purposes and cutting of trees for widening and elevated corridor construction for the Delhi-Dehradun expressway. NGT had rejected the application on the ground that the statutory appeal was not preferred against the forest clearance granted by the Central Government under Section 2 of the Forest Conservation Act. On appeal, the Supreme Court by order dated 16.11.2021 remanded the matter to the Tribunal for fresh consideration. It stated -

"However, we specifically direct that the appellant shall, in order to place the nature of their objections beyond doubt, file brief written submissions before the Tribunal cataloguing their grounds of challenge. The Tribunal is directed to pass a reasoned order on the merits, with reference to each of the grounds of challenge which is raised before it by the appellant in the course of their written submissions. In view of the fact that the order dated 27 August 2021 has been placed on the record only during the course of the proceedings in this Court, we also direct that if the appeal is filed within a period of one week, the Tribunal shall entertain the appeal on merits and shall not reject it on the ground of limitation. The appeal shall be listed before the Tribunal on the next working day after the filing of the appeal by the appellant."

Subsequently, the Tribunal constituted an expert committee giving liberty to Citizens for Green Doon to approach it with its suggestion.

"They are calling it the independent expert committee. My ground is that they are neither independent nor experts."

Justice Chandrachud asserted that the appellant organisation has been given liberty to approach the expert Committee and raise their concerns.

"You cannot say that. You have been given the liberty to point out whatever mitigation measures are required to the Committee. We will leave it open to you to bring all your concerns before the expert committee. That we will see."

Mr. Dutta submitted that the forest clearance given by the Centre had been assailed on the ground that it has been granted on misleading information; there was no ecological impact study while granting the approval; approval is non in consonance with the Forest National Policy; compensatory afforestation proposed in the present case involves planting trees in areas which are not degraded; carrying capacity has not been done for the city of Dehradun.

He pointed out that the underpasses constructed by NHAI in Pench Tiger Reserve are also suffering from deficiency. He contended that the same had not been taken into account by the Tribunal, while passing order -

"What we said was that NHAI had already built under-passes for tigers in Pench Tiger Reserve which are now under water. Tigers are not able to use it because the constitution was done so badly. As a tribunal they could have looked at the efficacy of the underpasses by directing studies.I had stated that efficacy of mitigation measures had not been verified and I dealt with that in detail in written submission."

Justice Chandrachud noted that the Tribunal had considered the aspect of mitigation measures with respect to the Pench Tiger Reserve.

"They consider the mitigation measures. Therefore, it would be better if you urge before the committee and they look into the issues."

Concerned that it might not be ideal to go against the findings of the primary fact finding, i.e. NGT, in this regard, the judge added -

"If NGT, as the primary fact finding committee, thinks this is to be done, how does the Supreme Court say otherwise? See what they say -

From the order of the NGT, Justice Chandrachud highlighted the benefit of the expressway -

"Delhi Dehradun Highway including NH-72A is an important highway connecting Delhi, Haryana and Western UP to Dehradun and higher reaches of Himalayas through Dehradun. Hence, the capacity augmentation of this highway is not only important for connecting State Capital of Uttarakhand with National Capital, but is also vital for Strategic defence purpose for timely and seamless movement of Army/ warheads to higher reaches of Himalayas in Country Northern border. The present stretch carries traffic more than 20,000 equivalent passenger car units (PCUs) per day which is much beyond the 2-lane capacity of 10500 PCU, necessitating urgent upgradation of highway capacity. As a result, the travel time between the two cities on the existing Highway (NH-72A) currently is 6-7 hours in the Non-Peak Hours and more than 8 hours during the Peak Hours. The average travelling time between Ganeshpur to Dehradun (20.7KMStretch) is 45 – 60 mins during Tourist/Yatra season, which extends to 2 hours leading to frequent traffic jams, resulting in significant increase in Air & Sound pollution in the area and also safety hazards to road users. Longer Travel time of vehicles in forest zone means longer time of disturbance to wildlife also..."

Mr. Dutta argued that the cost-benefit analysis, effective compensatory afforestation needs to be undertaken by the authority. He further pointed out -

"The NGT says that bio-diversity impact assessment is not required because it is a public project and not for commercial exploitation. In the Act there is no distinction between private and public projects."

He argued that as per the National Forest Policy diversion of forest land for non-forest use needs to meet higher threshold of scrutiny, which is lacking in the present case -

"There are 11,000 trees to be cut. Why I am here before your lordships is the National Forest Policy, 1988 states that whenever there is a diversion of first land for non-forest purpose it must be subjected to the most detailed scrutiny. When they calculate the cost and benefit. The cost means ecological cost. They are required to plant trees in areas which are degraded. They chose a dense existing forest."

"Consider reconstituting the committee because all the proponents are there. Let it not be the Chief Secretary as the independent expert. The very people who are responsible cannot be assumed to be independent or expert."

He alleged conflict of interest as WII, which had consulted the NHAI in the project, later sat on the National Board for Wildlife to approve the project proposal.

"Here the Wildlife Institute of India has prepared the report for NHAI and then sat on the National Board for Wildlife and approved the project. There is a huge conflict of interest. Before the project was placed for approval WII prepared the mitigation."

The Bench asked the Solicitor General to suggest names of independent experts who can be inducted into the Committee.

"Not trusting an officer merely because he is a government servant would not be a correct approach. Someone not from government may have his own notions and no idea of ground level issues", the Solicitor General submitted.

The Bench said that it will take up the matter on Monday.

"We will keep it on Monday. Let Mr. Dutta give you some suggested names. Equally you can tell us who are the experts. In Char Dham matter we had appointed one of the universities. The Indian Forest Institute is there. Though it is a Govt. Institute it has a very established reputation. There is one in Dehradun itself, Forest Research Institute. Maybe you can give us the list."