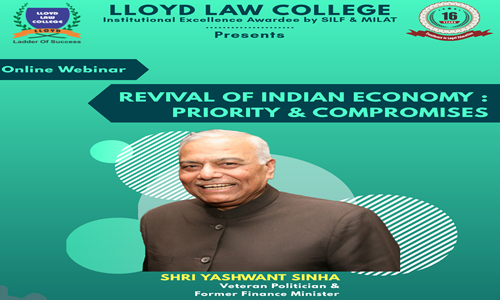 Lloyd Law College is organizing a live webinar on "Revival of Indian Economy: Priority and Compromises".

Brief Speaker Profile: The former Finance Minister Shri Yashwant Sinha completed his early and higher education from Patna. After completing his Masters in Political Science from Patna University, in 1958, he taught Political Science at his alma-mater during 1958-1960.

In 1960, Mr. Sinha joined the Indian Administrative Service and held several posts during his 24-year tenure. He served as Sub-Divisional Magistrate and District Magistrate for four years; was Under Secretary and Deputy Secretary in the Finance Department of the Bihar Government for two years, after which he worked in Ministry of Commerce as Deputy Secretary to the Government of India. From 1971 to 1973, he was First Secretary (Commercial) in the Indian Embassy in Germany. Subsequently, he worked as Consul General of India in Frankfurt during 1973-1974.

After his tenure in Frankfurt, Mr. Sinha worked in the Department of Industrial Infrastructure, Government of Bihar and in the Ministry of Industry, Government of India dealing with foreign industrial collaborations, technology imports, intellectual property rights and industrial approvals. Among changes to his credit as finance minister is breaking the colonial-era tradition of presenting Union Budgets in evenings. His 1998-99 Budget was the first to have been presented in the morning, a practice that has been followed since. He is also credited with boosting the funding of the National Highway Authority of India (NHAI) through a petroleum cess. That helped push the construction of highways across India, and kick-start the ambitious Golden Quadrilateral project. During his tenure as finance minister, he de-regularized the petroleum industry and helped the telecom industry expand. He was written extensively about his stint as the finance ministry in his book Confessions of a Swadeshi Reformer. Between 1980 and 1984, Sinha was Joint Secretary in the Ministry of Surface Transport. Influenced by Jayaprakash Narayan's socialist movement of the mid-seventies, he toyed with the idea of joining politics in 1974, but remained in the civil service for another 10 years.

He eventually resigned from the Indian Administrative Service in 1984 and joined active politics as a member of the Janta Party. He was appointed All-India General Secretary of the party in 1986 and was elected member of the Rajya Sabha in 1988. When the Janta Dal was formed in 1989, he was appointed its General Secretary. He worked as Minister of Finance from November 1990 to June 1991 in Chandra Shekhar's Cabinet. Mr. Sinha became the national spokesperson of the BJP in June 1996 and was appointed Finance Minister of India in March 1998. He represents Hazaribagh constitutency of Bihar in the Lok Sabha.