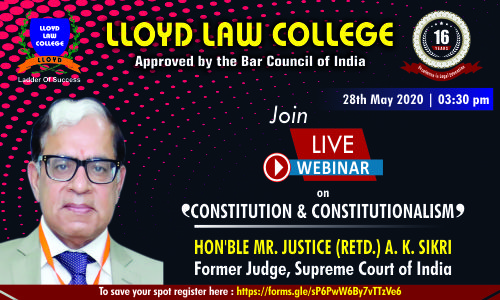 Lloyd Law College is organising a webinar on the Constitution of India. Theme: Constitution and Constitutionalism Speaker: Justice (Retd.) A.K. Sikri; Former Judge, Supreme Court of India Date: 28th May Time: 3:30 PM The webinar is free of cost and open for all. To register, click here.About Justice A.K SikriA thinker, a philosopher, a teacher, Justice AK Sikri has...

Lloyd Law College is organising a webinar on the Constitution of India.

The webinar is free of cost and open for all.

A thinker, a philosopher, a teacher, Justice AK Sikri has always believed in the richness of the Indian jurisprudential thought. Justice Sikri has an impeccable academic as well as professional record. After completing his B.Com (Hons.) from Sri Ram College of Commerce, University of Delhi, Justice Sikri went ahead to pursue LLB from the Faculty of Law, Delhi University. He was a topper in his batch and completed his degree in the year 1977, with a gold medal. He was also awarded a special prize for getting the highest marks in Constitutional Law. Following this, he enrolled in the LLM programme of Delhi University and aced the course as a topper. His area of specialization included Constitutional cases, Labour-service matters and Arbitration matters.

Justice Sikri was enrolled as an advocate in the year 1977 and started his practice in Delhi. In 1997, he was designated as the senior advocate by the Delhi High Court. He was elevated to the position of the judge of the High Court of Delhi in the year 1999. He has also served as the acting chief justice of Delhi High Court from 10th October, 2011, before being elevated as the chief justice of Punjab and Haryana High Court in September, 2012. Amongst other notable positions that Justice Sikri has held during his illustrious legal career, serving as the Vice-President of the Delhi High Court Bar Association from 1994-95 is worth the mention. He has also remained the Chairperson of the News Broadcasting Standards Authority and counsel for numerous Public Sector Undertakings, Educational Trusts, Banks and Financial Institutions. Justice Sikri has also held numerous important positions such as Member of the Committee on Restatement of Law by the Chief Justice of India, Patron-in-Chief and Executive Chairman, Delhi Legal Services Authority, Secretary, International Law Association (Indian Branch), to name a few.

He was a part of the Bench which heard the PIL seeking restrictions on the use of firecrackers in Delhi. In 2016, the bench passed an order banning the sale and stocking of all kinds of firecrackers, as well as a halt in the issuing of fresh licenses for the same. In 2018, he was part of a Constitution Bench which decided that the Chief Minister and not the Lieutenant Governor (LG) is head of the Delhi Government and that the LG has no power to act independently. By applying the principles of representative democracy to rule in favour of elected representatives - the Chief Minister and Council of Ministers, it resolved the administrative paralysis that had been afflicting the nation's capital for over 2 years.

His association with academics has been a long-standing one as he has served as a part-time lecturer in Campus Law Centre, Delhi University (1984-89). He has also remained the Member, Governing Council of the Indian Law Institute, Chancellor of the National Law University, Delhi (past), Patron-in-Chief, Delhi Judicial Academy.and Member, General Body, and Academic Council of National Judicial Academy (India).

Justice Sikri retired as senior-most puisne judge of the Supreme Court of India on the 6th of March, 2019. He was recently sworn in as an international judge at the SICC, Singapore Supreme Court, on 2nd August 2019, by the President of Singapore. It has been his endeavor to look back at the tides of time to find the genesis of our modern laws and legal thought in our ancient scriptures and teachings, thereby connecting modern legal thought with ancient Indian jurisprudence.