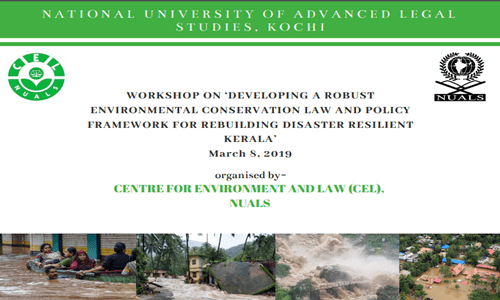 The National University of Advanced Legal Studies (NUALS), Kochi under the auspices of its Centre for Environment and Law (CEL) organised a Workshop on 'Developing a Robust Environmental Conservation Law and Policy Framework for Rebuilding Disaster Resilient Kerala' on March 8th, 2019 at the NUALS campus in Kalamassery, considering the devastating deluge and its after-effects that had...

The National University of Advanced Legal Studies (NUALS), Kochi under the auspices of its Centre for Environment and Law (CEL) organised a Workshop on 'Developing a Robust Environmental Conservation Law and Policy Framework for Rebuilding Disaster Resilient Kerala' on March 8th, 2019 at the NUALS campus in Kalamassery, considering the devastating deluge and its after-effects that had crippled the State of Kerala in 2018. They were supported by a group of like-minded lawyers working in the field of environmental law- Alphonsa Jojan, Jasoon Chelat, Neha Miriam Kurian, Harish Vasudevan and Shyama Kuriakose.

The Workshop was inaugurated by Mr. K.C Sunny, the Hon'ble Vice-Chancellor, NUALS. The Workshop spanned across two panel discussions, followed by working group deliberations. During the first panel session, Mr. Bijoy had some sharp comments on the colonial nature of India's administrative apparatus which he said consistently undermined democracy. He said that the system's blind faith in markets and technology was also eroding both ecology and human rights, particularly for forest dwellers. Mr. Raju Francis emphasized the need to increase forest cover as a key strategy in tackling climate change since forests are major sinks for carbon. He said that now there's a growing tendency to value forests in terms of the wider ecosystem services they provide, such as fresh air, water and regulation of the climate. Mr. Vivekanandan highlighted the increasing assault on coastal communities and marine resources in the name of economic growth and development, and the undermining of the coastal and marine commons. Mr. Radhakrishnan enunciated how a lack of insight and vision exists among the state government departments with respect to Sustainable Development Goals (SDGs) and suggested that marine sector and forest activities need to be aligned in line with SDGs.

During the second panel session, Mrs. Latha Raman, presently engaged in a project for rejuvenating Alappuzha's canals, said that it's important for local people to have a stake in water bodies, for them to be conserved. She emphasized on the need to shift focus from large projects, which tend to be unaffordable for many communities, to smaller projects with greater involvement from the people, with strategies based on decentralization, incentivization and good governance. Mr. Dhanuraj expounded that absence of a robust urban policy and governance in Kerala is a serious lacuna affecting environmental governance as well. He cited theexample of the Kochi Metro as a an example of a 'big ticket' project that was undesirable on most counts, including in financial and environmental terms. Mr. Geethanandan was critical of the conservationist line taken by governments and courts, which was pushing the very communities that have preserved forests, like the adivasis, out of their traditional habitat. Dr. Elamon focused on greening the funds available with local self governments and urged that local and district level convergence between agencies is required for this to materialize.

The Working Groups collaborated and deliberated on themes revolving around 3 main issues-Institutional Strengthening and Funding, Disaster Risk Reduction (DRR), and Strategies and Measures for Improving Civic Issues. Moderated by well known High Court Adv. Harish Vasudevan, the Working Group ironed out valuable suggestions on a plethora of pertinent issues including need for inter-departmental coordination, capacity building of LSGs, examining scope of scientific planning through expert inputs, assessment of departmental mandates, harmonization of District and Panchayat Developmental Plans with District Disaster Management Plan, implementation of SDGs through District Planning Committees and local administration, reorientation of all local plans with SDGs, encouraging people's participation in DRR, access to justice through technological means, emission tax, synergy between environmental Laws and rules and Municipal/ Panchayat rules, possibility of a Forest Rights Act like law for coastal areas and maximizing decentralization of policies with people at the core of decision making structures.