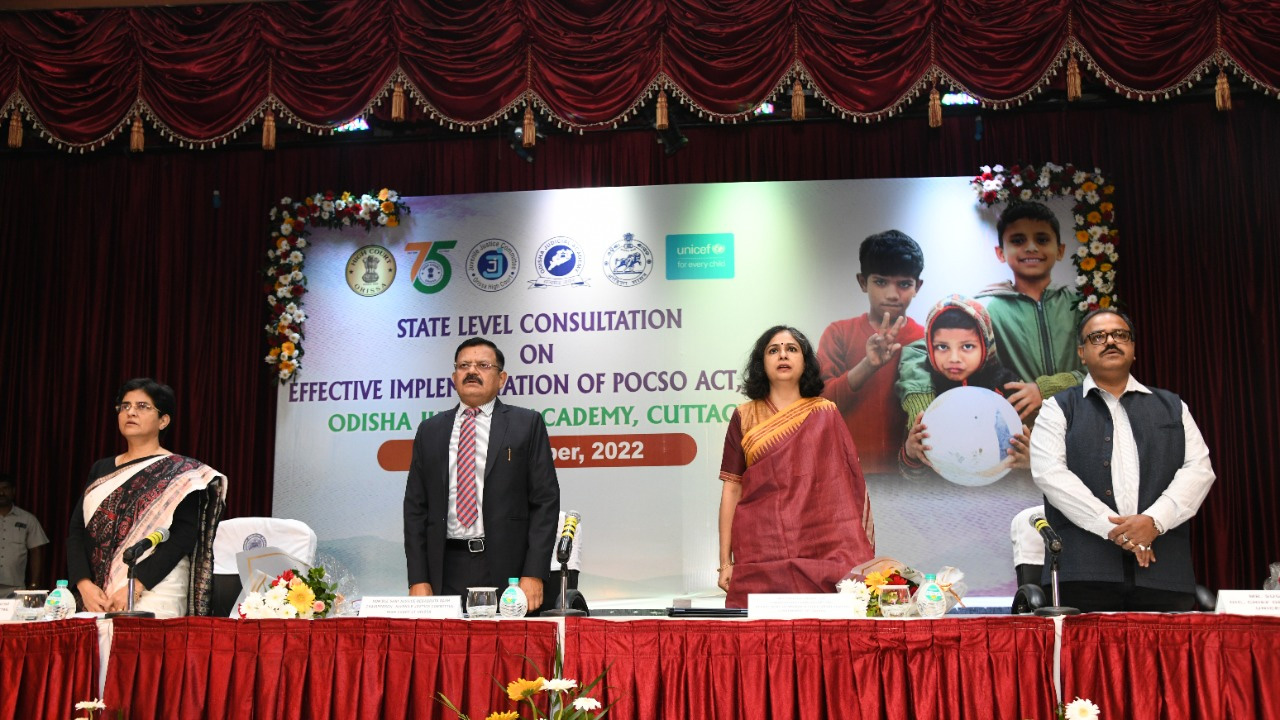 A one day state-level Consultation on Effective Implementation of the Protection of Children from Sexual Offences Act, 2012 (POCSO Act) was held on Saturday at Odisha Judicial Academy, Cuttack.

The event was organised under the aegis of the Juvenile Justice Committee of the High Court of Orissa in collaboration with Department of Women & Child Development, Govt. of Odisha and UNICEF.

The program convened with the welcome address by Justice Debabrata Dash, Judge, High Court of Orissa and Chairperson, JJC. He said that implementation of the statute is a gradual process and invited the participants of the consultation program to discuss on the working of the Act in the last one decade. He also sought the stakeholders to discuss on the mechanisms to ensure protective environment for the children. He underlined the vicious effect of social and mental stigmas which are the corollaries of victimisation to sexual violence at a young age.

It was followed by a brief opening remark from Shubha Sarma, Commissioner-cum-Secretary, DWCD. She told the audience about various schemes and steps taken by the Odisha Government to strengthen the POCSO mechanism. She said that the State Cabinet has recently approved the scheme named 'PRARAMBH', which is aimed at ensuring the right to survival, protection, mental and physical health and education of children.

In the second session, focus group discussions were conducted on multiple themes highlighting the issues pervading rehabilitation of POCSO survivors, intricacies in the existing procedures followed by POCSO Courts while holding trials, sensitisation of numerous stakeholders involved in different capacities. A productive deliberation was also made on capacity building of various functionaries under the Act. Further, the role of State-run institutions, from spreading awareness to providing required assistance to victims, was also discussed.

The group discussions were followed by a technical session chaired by Justice Sangam Kumar Sahoo, Judge, Orissa High Court, where the groups presented their findings. The groups faced questions from the audience and answers were accordingly given. Justice Sahoo gave various suggestions for better implementation of the statute.

At the end, domain experts Priti Patkar, Co-founder & Director, Prerana, Mumbai and Prof. Ved Kumari, Vice-Chancellor, National Law University Odisha presented their intellectual perspectives on the above discussed themes, which was also followed by a question-and-answer session. Prof. Ved Kumari particularly stressed on the issue of consensual sexual relationship between minor couples. She was sceptical as to why in such cases only the boy is prosecuted when the entire act was voluntary and consensual.

Patkar spoke about role of support persons in preventing secondary victimisation of POCSO victims. She batted for organising mentorship programs for such persons. She also said true justice is served to POCSO victims when they are treated with dignity rather than when the guilty is convicted. She underlined the importance of psychological and mental healing of children for their better rehabilitation.

Justice Aditya Kumar Mohapatra, Judge, Orissa High Court expressed his concluding views with respect to the focus group discussions and their findings. The curtains of the event were drawn by Justice Murahari Sri Raman with his vote of thanks.