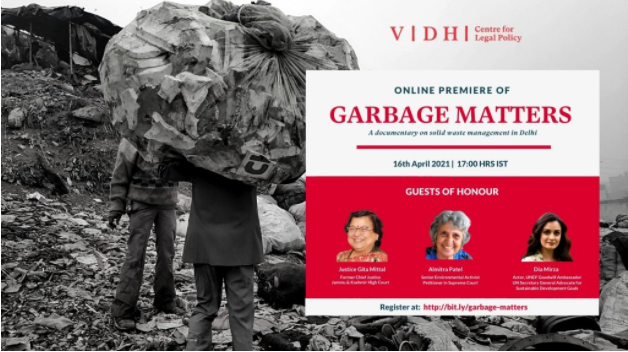 Vidhi Centre for Legal Policy invites you to the online release of the documentary film 'Garbage Matters' scheduled on 16th April 2021 (Friday) at 5 pm (IST).

The Supreme Court of India and the National Green Tribunal have intervened on several occasions to address the issue of mismanagement of Solid Waste in Delhi. The issue of Solid Waste Management ("SWM") in Delhi was taken up by the Supreme Court in BL Wadehra v. Union of India (AIR 1996 SC 2969) and Almitra Patel v. Union of India {(1998) 2 SCC 416 B} which have had a profound, and long-standing implications on policies and laws related to the management of waste in the city of New Delhi.

In 1998, in Almitra Patel case, the Asim Burman Committee was formed, which eventually culminated in the formulation of the Municipal Solid Waste (Management and Handling) Rules 2000 ("MSW Rules"). Under the MSW Rules, the municipal bodies were given the responsibility of collection, storage, segregation, transportation, processing and disposal of municipal solid wastes. They also introduced the possibility of engagement of private agencies for the above purposes in the waste-value chain.

In September 2014, Almitra Patel v. Union of India (O.A. No. 199 of 2014) was transferred to the National Green Tribunal ("NGT"). In 2016, Solid Waste Management Rules 2016 ("SWM Rules") were introduced by the Ministry of Environment, Forest and Climate Change which replaced the MSW Rules, 2000. These new rules were able to incorporate various new concepts that were overlooked in the previous rules. The NGT via its order in dated 22nd December 2016, issued extensive directions with respect to the implementation of these rules.

This film is the last of the five short documentaries, produced by Vidhi on key environmental issues in India under the project 'Courting the Environment'. In this 20-minute-long documentary film, the organisation has sought to explore the extent to which the rules have been implemented in pursuance of the courts' orders and the systemic issues that lay at the heart of non-implementation of court orders.

The schedule of the event is as follows: