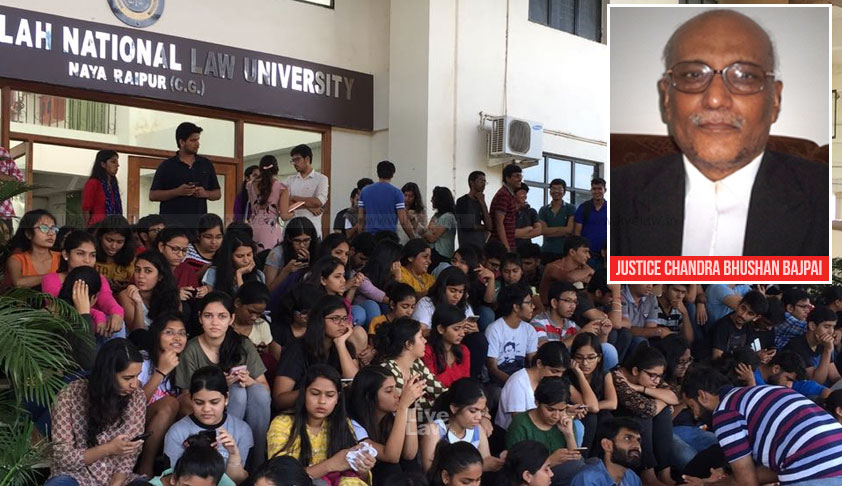 Former judge of Chhattisgarh High Court, Justice Chandra Bhushan Bajpai has now been appointed as the Vice-Chancellor (VC) of Hidayatullah National Law University (HNLU), Raipur, after Prof. (Dr) Sukhpal Singh resigned following hunger strike by the students.Soon after arriving at the campus, the new VC held a meeting with the representatives of the University’s Student Bar Association...

Soon after arriving at the campus, the new VC held a meeting with the representatives of the University’s Student Bar Association (SBA), assuring them of his intentions to work for the best interests of the students.

It may be recalled here that the Chhattisgarh High Court had, on 27 August, in Dr. Avinash Samal v. State of Chhattisgarh, quashed the extension of Dr. Singh’s tenure. Scores of students had then camped overnight on campus in the open from 10:30 pm the same day, demanding that the judgment be “respected” and that Dr. Singh should not be allowed to continue as the VC.

It was only on the 3rd day of the protest that the Chancellor of the University appointed Mr. Ravi Shankar Sharma, the Principal Secretary, Government of Chhattisgarh, via notification as the interim Vice-Chancellor of the University. Students rejoiced at the appointment and resumed discussions with the administration, placing a list of demands for enhanced transparency in administration of the college. Their joy was, however, short-lived.

His reinstatement reignited the protests on campus, with more than 800 students having signed a letter of no-confidence against him, owing to his “style of arbitrary and discriminatory decision making”. The letter highlights several allegations of inter alia financial irregularity, inaction on allegations of sexual harassment, lack of transparency, arbitrary hiring and firing of faculty, and maladministration.

With their demands still being unfulfilled despite almost a week having passed since Dr. Singh’s reinstatement, the students have now decided to go on an indefinite hunger strike, with three major demands: removal of Dr. Singh as the VC, access to the Audit Report of the University, and institution of a review commission of the University as per the provisions of the HNLU Act.

The students of the University expected high standard of legal education and conscience from the administration. However, all that the student body received from Dr. Sukh Pal Singh’s administration was apathy and indifference on various problems,” a student told LiveLaw.

While the students had managed to schedule a meeting with the Chief Justice of Chhattisgarh High Court, Justice Ajay Kumar Tripathi, who is the Chancellor of the University, the meeting did not have the desired results, in the absence of any relief or timeline. They have therefore decided to follow the “Gandhian principles of Satyagraha…in the hopes that the authorities will take immediate and effective actions keeping in mind the student welfare”.

Students had then decided to go on an indefinite hunger strike. However, instead of resuming dialogue in response to the declaration, Dr. Singh had appealed to the students to call off the protest immediately and attend classes from Monday, October 1, or face consequences, which may include closure of the University sine die “to restore the normalcy in the University”.