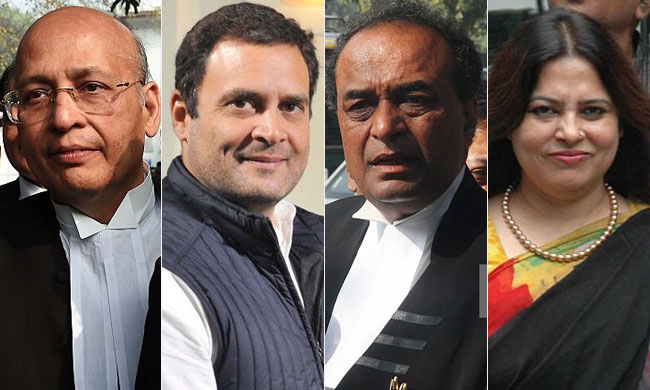 "How has he (Rahul Gandhi) committed contempt? Where is the press statement where he has committed contempt?", asked Chief Justice Ranjan Gogoi. Indicating the translated copy of an interview, on behalf of petitioner and BJP MP Meenakshi Lekhi it was advanced that the Congress chief has commented that the Supreme Court (in its judgment dismissing the Centre's preliminary objection to...

Indicating the translated copy of an interview, on behalf of petitioner and BJP MP Meenakshi Lekhi it was advanced that the Congress chief has commented that the Supreme Court (in its judgment dismissing the Centre's preliminary objection to the reliance sought to be placed on certain Defence Ministry file-notings in connection with the Rafale deal), has said that "Chowkidaar chor hai".

"The SC has now validated that the PM stole Indian Air Force funds and gave them to Anil Ambani...30,000 crore rupees have been given to Anil Ambani...I have been saying since the start that there is corruption in the Rafale deal and now even the SC has admitted this...the SC has done justice and said that chowkidaar is thief...the SC is going to conduct investigation now...", Gandhi was quoted as having said.

It was argued that attributing the affirmation of corruption in the deal and a consequent investigation to the apex court, Gandhi had made these jibes at PM Modi not just at the press conference in Amethi but even at a public rally in Katihar, Bihar later in the same day.

"It seems you are making statements and then justifying them. Point out where in our order we have said this? How does your client attribute it to us?", inquired Chief Justice Gogoi from Senior Advocate Abhishek Manu Singhvi appearing for Gandhi.

"For that, I am expressing complete regret", replied Dr. Singhvi.

"Where? Show us? It took you 22 pages to express complete regret?", commented the Chief Justice.

At this point, Senior Counsel Mukul Rohatgi for Lekhi argued,

"He is adding insult to injury!...dragging the SC into political controversies...I take it he is a literate. He says he hadn't read or even seen the order when he made those statements? He flew from Amethi to Bihar. In the three-hour flight, nobody could give him a copy of the order?"

Taking objection to Gandhi's second affidavit where he has taken "this opportunity to reaffirm his stand" that the Rafale deal is "a leading example of the corruption of the BJP government", Mr. Rohatgi contended,

"The SC is not a place for political slogans! All this is cock-and-bull...putting words in the mouth of the court...no order of the court makes mention of chowkidar or the PM...he is telling people this is what the SC has said! People believe what the SC says! This was Deliberate and repeated again and again!...His second is only a copy of the earlier one. Just one-word 'regret' is mentioned at the end. The only difference is that it was at page 6 of the last affidavit and is on page 7 here...He is talking of political campaign? The SC has nothing to do with it...this is the Grossest form of contempt..."

"What is the meaning of 'regret' in brackets (as expressed by Gandhi in his affidavits)?", asked Chief Justice Gogoi.

"Ask him! I don't understand. The law says that if you have made a mistake, come clean. We have all filed thousands of affidavits of unconditional apology. And there must be a battery of lawyers to advice him...it is as clear as daylight that he has misled the nation, that there is obstruction of justice...He is justifying his comment by saying that multiple statements were made by the PM and other leaders that the court has given them a clean chit (in the Rafale case). Does that give you the charter to say that the SC has said something (it hasn't)?! His Regret is only lip service...", said Mr. Rohatgi.

In as much as Gandhi has said that at the time of and in his statements, the issues relating to court proceedings got "juxtaposed and mingled with a political slogan ('chowkidaar chor hai')", which was being used extensively by him and his party, Mr. Rohatgi argued, "What is 'juxtaposition'? It is a court order. You read it and understand it!"

Justice S. K. Kaul also indicated averments in the affidavit where Gandhi has "denied that utterances were made in the name of the SC".

"Yes, now there is denial? In the first affidavit, he admits that he said it. I don't know if he read this affidavit before he signed it. I have videos of every statement he made. This affidavit should be rejected", said Mr. Rohatgi.

"Your argument should be to reject (the excuses)", observed Chief Justice Gogoi.

"Let us be very clear. Once you start arguing your affidavit, you cannot turn around and say you want to file a reply...we will hear you and close the matter", noted the Chief Justice.

"I am responding not on the affidavit but to Your Lordships' observations. I am arguing those portions of the affidavit that have not been read to you. If you are not satisfied, give us an opportunity (to respond)...Your Lordships heard the contempt for half an hour. Please give me 10 minutes. This is about substantive justice", Dr. Singhvi sought to say.

"Contempt is nothing new. Do you feel you are not contradicting in saying one thing and then denying it? If you made a mistake, admit it", weighed in Justice Kaul.

"I have. suppose I can show that the perceived contradiction is not there? If Your Lordships still feel otherwise, can I be given an opportunity to add something? I am candidly asking this though I don't think there are any deficiencies...", said Dr. Singhvi.

"How long can this continue? Is it that important a matter?", noted the Chief Justice.

"I have been most candid and I have apologised. I have pinpointed my three errors and have apologised...", advanced Dr. Singhvi, proceeding to draw the bench's attention to them.

'Today, the SC has made it clear that something or the other is wrong'- "I have said this. I admit it was wrong", conceded the Senior Counsel and Congress MP.

'The SC will investigate this', 'The SC has said that the chowkidaar has committed theft'- "I have wrongly attributed to Your Lordships what you have never said", he continued.

Dr. Singhvi readout that Gandhi had "no desire to bring the court into the political arena", "nor the slightest intention to insinuate the SC proceedings" and that it is "ex hypothesis clear that no court, much less the SC, would adopt, endorse or uphold a political slogan"

"Leave your political stand to yourself. Don't tell us", said Chief Justice Gogoi in response to certain averments in the affidavit. The bench asked where the statement of apology was.

"I have expressed regret for the attribution and will give an apology", concluded Dr. Singhvi.

Allowing Gandhi to file another affidavit by Monday (when the Rafale review will be heard), the bench clarified that this order cannot be understood to be an acceptance or acknowledgment of the affidavits already filed.