'CCI Order Against Google Will Boost Digital Innovation': Interview With The 3 Young Lawyers Who Fought The Legal Battle 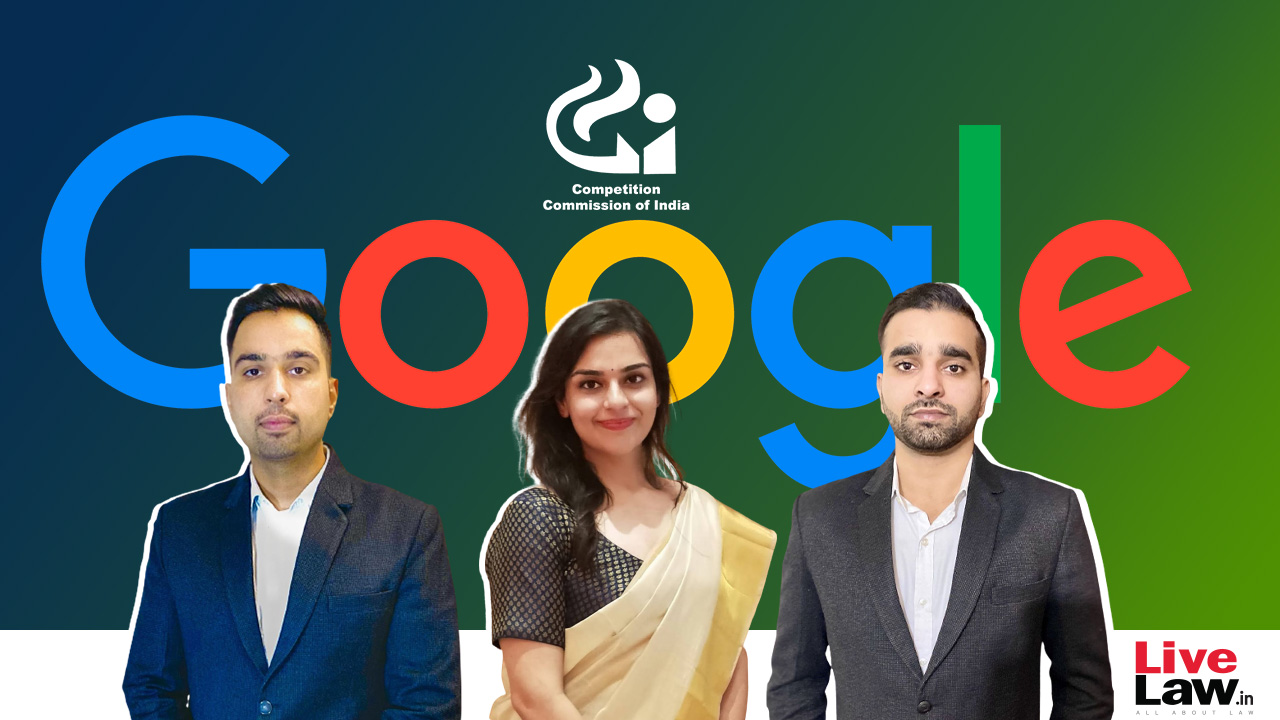 Umar Javeed, Sukarma Thapar and Aaqib Javeed (left to right) who approached the CCI against Google

Search Engine Giant Google has been in news headlines for over a week now. This is because of two orders passed by the Competition watchdog of India, which heavily fined the Company.

The first order passed by the Competition Commission of India on October 20 imposed a penalty of Rs. 1337.76 Crore on Google under Section 27 of the Competition Act, 2002, for abusing its dominant position in multiple markets in the Android Mobile device ecosystem.

The CCI's order came in a complaint filed three advocates in 2018: Umar Javed, Sukarma Thapar and Aaqib Javeed. While Umar had previously worked with CCI for half a decade before shifting to a PSU, Sukarma is practising independently and Aaqib just stepped into litigation a year ago after completing his Masters in Law.

In this interview with Rintu Mariam Biju, Senior Correspondent, LiveLaw, the trio reveal exclusive details on what prompted them to file the case against the Google, the impact of the CCI order on the ground level and lot more.

What were the factors that influenced/motivated you to go ahead with the case?

U: From the start itself, we were interested in the area of Digital Technology and its developments. In 2018, there was an order passed by the EU Commission wherein Google was penalised for its anti-competitive practises. After some research, we understood that similar practises are prevalent in India as well. At that time, I was using an Android phone which enabled me to cross check whether I could delete the built-in apps installed on the phone Google Mobile Services (GMS apps), whether Google search engine appeared on top, among others.

S: When EU passed its judgement in 2018, we felt that it was a pertinent case for India since Android phones had one of the largest markets in the country. We were astonished by the growth of the market and the number of users it influenced. Keeping the EU order in perspective, we were analysing how commoners were affected. Once we found the issues, we wanted to flag it to the CCI. That was the intention from the beginning.

Can you give a brief of the key allegations made against Google in your complaint for the benefit of our audience?

U: So, if a phone manufacturer intends to procure a license from Google, they will have to enter into multiple agreements, two of which are Mobile Application Distribution Agreements (MADA) and Android Compatibility Commitment Agreements (ACC). The first allegation was pertaining to GMS apps. These agreements were anti-competitive because it curtailed the manufacturer's choice of using the Android software. Second was Bundling, which simply means that even if the manufacturer requires only one app (out of the many offered by Google), by the virtue of the agreements, they would have to take all apps. It's an 'all or nothing' situation for them. Manufacturers do not have the liberty to pick and choice. The third allegation was on Anti-fragmentation agreements wherein the manufacturer is not allowed to modify or customize the android software.

A: To give an example, if YouTube was not pre-installed on Android phones, it would not have been as popular as it is now, in India. This is just an instance of how these agreements work on the ground level and how it manipulates the customers.

Considering the nature of the case, it's only a fair guess regarding the difficulty in accessing various documents in support of your case? How did you find the relevant materials?

S: We did not have access to the agreements that Google entered into with the Android manufacturers. We just struck our luck by digging into supporting documents to strengthen our allegations. There was a Harvard Professor, who at that time was assessing Google's practises and wrote a working paper on that subject. The paper, which received worldwide coverage detailed the clauses in Google's agreements. We drew from that along with applicable Indian data. But there's only so much that you can draw from foreign data because it's not relevant to the Indian market. In US, Apple is dominant, which is not the case in India. In the Indian market, we had to draw parallels on how Android market is more dominant, how smartphones are Android based, how the software is installed and how Google's agreements are having an effect on denying access to new players.

Undertaking thorough research is fairly common as far as CCI cases are concerned. Unlike civil cases, it's not a party vs party here (micro level). CCI only interferes when there's a macro level issue. So, the idea is to convince the Commission that the whole Indian geography and the Indian market will be affected.

What are your views on the order passed by CCI? Do you think it dealt with all aspects that you had pointed out in the complaint?

S: CCI has not only delved into different markets which we had flagged but went beyond by investigating into allegations which we were not able to pin-point. For instance, the EU Commission's order highlighted that the phone manufacturers who entered into agreements with Google were also provided with monetary benefits. We could not establish a connection with Indian manufactures in the field and therefore, could not raise this aspect in our complaint. It is under the Director General's power that if he comes across such practises, he can take that into account and CCI can look into that aspect. The order covered the Digital Markets apart from providing good literature and a peak into how the jurisprudence is going to develop in the digital market. It's dynamic market so status quo is not the norm. However, in the current market situation, this is a very appropriate order.

U: This is a landmark judgement in competition law jurisprudence and particularly in the Digital Market. It has highlighted certain aspects such as connection of data, among others. It has also highlighted how the consumers' choice is affected and how CCI intends to protect the interest of the consumers as well.

A: Google, through Android, has multiple businesses. Through Android manufacturers, it leveraged its dominant position to protect its other market (Surge market). With this order, things are bound to change. Google's practises will change. Now users can have other search engines services. In India, developing competing search services was never a technological or an infrastructure related problem. The issue is that there are market constraints which dominant players had developed, thereby curbing the rise of new players.

How do you think the order will impact ordinary customers?

S: This is connected to why we filed the case. We noticed that our devices were so connected to the Android ecosystem that we did not have exposure to other alternatives. This order will definitely better our technological literacy as well as encourage innovations in the relevant market. To reiterate, the issue was never on the capability of Indian start-ups. Unless a giant player is brought on equal footing with the local players, there isn't much of an opportunity for the latter to compete.

U: The first, without a doubt, would be ample freedom to Android smartphone users in India. The order now will indirectly work as an incentive for Android Manufacturers to develop alternate versions. If Google implements the directions in the CCI order in letter and spirit, it will definitely boost innovation in the Digital Market. How I use my phone should not be dictated. If there are 10 apps in my phone, I should be able to delete or keep whichever I want because it's the purchaser's will. Otherwise, it creates a pre-installation bias. This issue was specifically brought to light by the EU Commission in its order. A user, when she sees that an app is already installed in her phone, rare are the chances that she would install a substitute app for the one already installed. She hardly explores any other app (similar to the one already installed).

What is your message to law students?

A: We should use our knowledge for the social good, for those who aren't aware. Some people asked me, "what did you get after filing the case?" Technically, I did not get anything. But if some consumer is going to benefit owing to this order, then my efforts have been paid. Money shouldn't be the key driver in taking up every case.

Can you please share your thoughts on the importance of legal knowledge and legal research for other lawyers/law students to take up such cases?

S: Well, my answer will be two-fold. First comes legal knowledge. Not all students still have access to good quality legal education. We are in fact privileged, my colleagues and I had access to legal knowledge because of our education. We had access to books that gave us insights and working of the competition law. I would encourage students to stay curious. To read more books and journals and stay abreast on the latest developments.

Next spectrum is how that knowledge to can put to good use. Curiosity is one thing but students must be able to substantiate their views, in other words, corroborate while arguments. I've seen a lot of students debating out of the sheer zeal of proving their point, without a good base or a foundation. That being said, they must be provided with a sufficient support structure as well. However, we shouldn't underestimate a law student's contributions. Surely, the internship regime has helped students gain more knowledge and better their research skills, but I still believe that more access, especially in the rural areas, will empower more students.