'I haven't Lost Hope In Judiciary, But My Faith Has Diminished':Senior Advocate Colin Gonsalves [Interview] [Video] 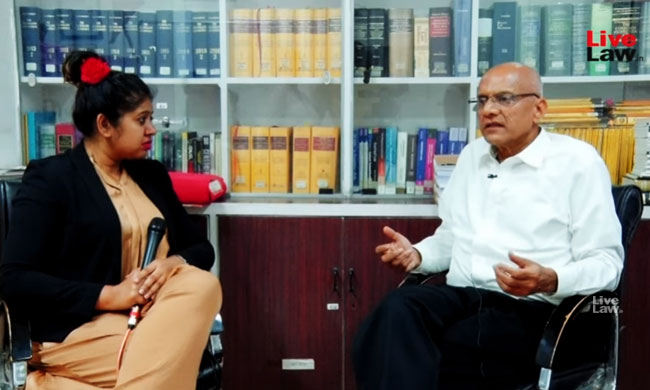 Speaking to Live Law (Advocate Avani Bansal), Adv. Colin Gonsalves not only shared his concerns, hopes and aspirations for the country, but also expressed hope that things are going to be alright, despite the prevalence of an atmosphere of fear. He poured out his thoughts about the state of the nation, independence of judiciary, the increasing clampdown on rights activists and the need...

Speaking to Live Law (Advocate Avani Bansal), Adv. Colin Gonsalves not only shared his concerns, hopes and aspirations for the country, but also expressed hope that things are going to be alright, despite the prevalence of an atmosphere of fear.

He poured out his thoughts about the state of the nation, independence of judiciary, the increasing clampdown on rights activists and the need to uphold the spirit of Constitutional liberties against the excesses of power.

Here is the gist/extract that the readers must not miss :

"Human rights activists knew that they would come under attack, following incidents like lynching, but they never expected the danger to dawn so fast. Changes are made to legislations like RTI and UAPA in a way that resembles a sledgehammer striking down the laws and crushing down the human rights"

"There is a strange sense of fear among all, including the activists and the lawyers. Nobody wants to speak up. Sedition cases are charged against people for making legitimate criticism".

"I can sense among my colleagues that there is an icy clamp around their hearts. It chilled their hearts to the bones."

"There is a feeling of being watched, that phones and emails are intercepted. People are scared. I am scared. But I will not stop talking. My response to fear is strange, I become more resolute. All we can do is - speak up for the truth. We may be insignificant, but we have our voices, our conscience, principles and clear way of thinking, and we know we are right".

"Newspapers are largely owned by corporate houses and they do not cover the news they used to cover. There is a conscious decision to cut off human rights issues from the news. But Indians are very courageous people, who amidst their troubles and poverty, have the courage and determination that is unfathomable. Their spirit of resistance is very much alive."

"Our Supreme Court is extraordinary when compared with those in the developing world. Thirty seven judges sit in benches of two. They are a reflection of our society. Some are fantastic and some are terrible."

"I haven't lost hope in the judiciary. It is true that my faith has diminished and there is a fundamental decline happening somewhere".

"Judges are also overhauled by the BJP's massive mandate. They are doing massive wrongs. Whether the Court is capable of standing up is matter that only time will tell."

On the rise of majoritarian politics

"We should harness the spiritual energy in us and speak up for truth. You may think you are alone as you are not. Rise to the challenge. Truth and righteousness will always prevail. Rakshas rule in the heat of kaliyug. But rakshas' rule is always temporary."

On Article 370 and Jammu & Kashmir

"What has been done to Art.370 is morally and legally wrong. This could have been done through an amendment, but for that parliament will have to be called and discussions would have to be held. So the government took the route of presidential order under Art 370. This is a very good case. People are in haste in filing petitions. Such petitions without studying the matter are a disservice to the country and to the legal service. There are serious young lawyers working on it."

"Is there a judge or a bench who will hear the argument that a larger bench be constituted to look into the legal impact of Art. 370(3), when Constituent Assembly is not available?"

"To understand the situation, put yourself in the shoes of a Kashmiri. Majority of them are peace loving and good people. And they have been subjected to a history of torture, shooting and killing. We should understand how millions of Kashmiris feel. Government lies to take attention away from the troubles of the people. Lying will stop working soon."

"We grew up with the idea that an individual can change the world. Such ideological confidence is missing in the young. But ten years down the line, there will be a crisis that the young are not trained to anticipate. So they should think now, think innovatively and become social and mental entrepreneurs. Caste and Hindu rashtra will go. Sexual discrimination will go. The young would emerge the leaders of India, ten years down the line. India would emerge a powerful nation not dominating others, living in harmony with others. That will come in the next ten years."

To the young lawyers, who want to take up human rights, but don't have money for survival:

"There will be darpoks who will be darpoks; they have their comforts and remain darpoks. But is it possible to live a life of human rights and live a decent middle class life. I have done that. They say that commercial litigation is the main stream and human rights lawyers are on the fringes of law. And I turn around and say: -You are on the fringes of law. I am in the mainstream, I say so because, you do labour law, farmers' law, patent law, environmental law, women's right etc, and there are millions of people. We are the main stream"

"Then the question is - can you do such cases and survive? You can, all you have to do is work more, work longer hours, work on weekends and charge reasonably. Poor and working people do pay. You can do 30% free cases and live a decent life. But you may not have a BMW car and a penthouse. But you don't need that for life; you just need a decent life, a decent house and security, so that when you grow old you are not on the streets and your children are well educated."

"Once we reorient our way of looking at the world, we understand that the aspirations that we have are petty and for those petty aspirations we sacrifice our spirituality. Everything is achievable doing human rights, so that at the end of the day, we have a happy life, a content heart and sleep well at night."

We thank Advocate Avani Bansal for doing this interview for LiveLaw