Sr Adv K M Vijayan, Whose Lecture On Art 370 Was Cancelled Due To Opposition, Shares His Views On J&K Special Status 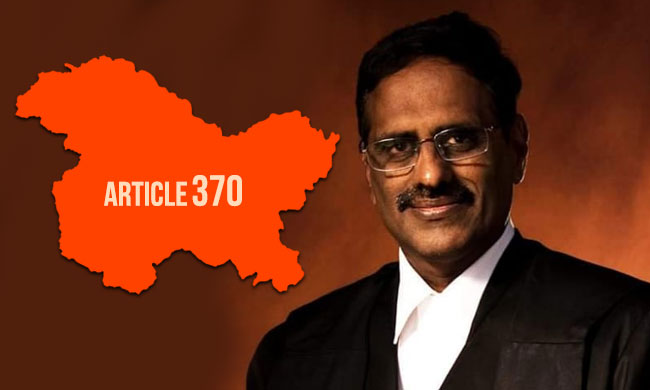 After his lecture scheduled by the Madras Bar Association on Article 370 of the Constitution was cancelled due to opposition, Senior Advocate K M Vijayan of Madras High Court shared his views on the topic with LiveLaw.Hours before the event scheduled on August 14, the MBA cancelled it when they received a representation from BJP legal wing objecting to the lecture on the ground that issue...

After his lecture scheduled by the Madras Bar Association on Article 370 of the Constitution was cancelled due to opposition, Senior Advocate K M Vijayan of Madras High Court shared his views on the topic with LiveLaw.

Hours before the event scheduled on August 14, the MBA cancelled it when they received a representation from BJP legal wing objecting to the lecture on the ground that issue was 'sub judice'.

Senior Advocate Vijayan expressed disappointment at the MBA buckling under pressure. He said that he was planning to speak only on the constitutional aspects of the issue.

"No one needs to accept my view. I am neither a member of any political party nor issuing any political statement. If a lawyers' forum cannot debate Constitution inside the court in Tamil Nadu, where else it is possible", asked Vijayan.

In conversation with LiveLaw, Senior Advocate Vijayan opined that the Presidential Orders issued on August 5 and 6 without the concurrence of State Government amounted to a 'colourable exercise of power'. Articles 370(1) and 370(2) cannot be invoked without consultation or concurrence of the Government of Jammu & Kashmir, he said.

"The entire exercise is illegal, malafide and ultra vires", he said in reference to the orders issued by the President on August 5 and 6 leading to the abrogation of the special status of Jammu and Kashmir under Article 370.

He also said that it was redundant to call Article 370 temporary after nearly 70 years of existence.

Widely known as a constitutional lawyer, Senior Advocate K M Vijayan enrolled as lawyer on November 1, 1978. He was designated as Senior Advocate by the Madras High Court on March 12, 1996.

Excerpts from the conversation :

LiveLaw : What is your reaction to the abrogation of the special status of the Jammu and Kashmir by the recent Presidential Orders under Article 370 of the Constitution of India?

K M Vijayan : As a Constitutional lawyer, I am concerned only with the constitutional morality of this issue.

The Presidential Order dated 05th August 2019 is not restricted to Article 370(1) of the Constitution. It also relates to Article 367 which deals with interpretation guidelines of Constitution with reference of General Causes Act, subject to adaptation and modification made under Article 372. In short, besides Article 370(1), Articles 367 and 372 scope also have to be examined.

Article 370 has three sub clauses. In the 1st sub clause (1)(a), it says Article 238 will not apply to Jammu & Kashmir which is redundant now as Article 238 is repealed by Constitutional 7th Amendment in 1956 as on date there is no Article 238.

Sub clause (1)(b) says about the law making power by the parliament under Article 370 is restricted to union list and concurrent list, which is in consultation with the Government of Jammu & Kashmir, with reference to matters specified on the instrument of accession of the year 1948 which includes Maharaja or any other person for the time being recognized by the President on the advice of Council of Ministers.

In Clause 371(1)(b)(ii) it says for matters other than specified under instrument of accession with the concurrence of the Government of Jammu & Kashmir is required.

Clause (c) provides Article 370(1) will apply to Jammu & Kashmir and clause (d) states such other matters the President by order specify. The above power is subject to consultation in matters connected with accession and concurrence with the matters for being outside the scope of accession instrument.

These articles say the following. In matters outside the Instrument of Accession, the concurrence of government means that before concurrence the matter(s) has/have to be placed before the Constituent Assembly of Jammu and Kashmir for taking such decisions. Article 370(3) gives the power to the President to issue a notification to the effect that Article 370 will cease to apply or apply with such modification. This again has a caveat that it can be done only with the recommendation of the Constituent Assembly. Now there is no Maharaja. So the changes, if any, have to be done within three years under Article 372. In today's scenario, without concurrence from the legislative assembly, Article 370(3) cannot be invoked without the Council of Ministers headed by the Chief Minister. Articles 370(1) and 370(2) cannot be invoked without consultation or concurrence of the Government of Jammu & Kashmir, as the case may be.

What is your view about the argument that Article 370 is a temporary provision and it can be easily altered by Presidential Order?

Whether it is a temporary or permanent provision, makes no difference because the procedure to be followed for making changes is only with reference to Article 370. Initially, when the accession instrument was made in 1948, it was believed that, it can be worked out within a period of three years.

Now that almost, seventy years had lapsed since the accession instrument was executed, it is redundant to call it temporary. At any event, there is no dichotomy in procedures relating to abrogation of Article 370 dehors the fact that it is temporary or permanent.

What is your view on certain interpretation clauses being amended by the President Order dated 05th August?

President has no power to amend clauses under 370 without concurrence from the state legislature. It is a colorable exercise of power by the President by amending the definition of of 'government' and 'constituent assembly' and overlooking the role of the legislative assembly given under Article 370(2). The entire exercise of the Presidential Order notified on 05th August is illegal and ultra vires to his powers under Constitution for the reasons stated above. If the Presidential Order dated 05th August 2019 fails for the reasons stated above, the new Act should also fail since it is against constitutional morality and a malafide exercise of power.

"It is a colorable exercise of power by the President by amending the definition of of 'government' and 'constituent assembly' and overlooking the role of the legislative assembly given under Article 370(2). The entire exercise of the Presidential Order notified on 05th August is illegal and ultra vires to his powers under Constitution for the reasons stated above."

What is your view on the bill passed by the Parliament regarding Jammu & Kashmir State Reorganization Act on the 05th and 06th August by both houses of the Parliament?

If the Presidential Order dated 05th August fails for the reasons stated herein above, following suit, the new Act referred to herein above should also fail since it is against constitutional morality and malafide exercise of power which is one of the grounds opened to challenge legislature as per the decision in Shreya Singhal case.

Malafide exercise of power is one of the grounds used to challenge the legislature after information technology act decision. Earlier, malafide exercise of power was not a reason to set aside an Act of Parliament. In the Shreya Singhal case, Supreme court justice Rohinton Nariman makes this case. Similarly, in the Sabarimala case, constitution bench discussed the idea of Constitutional Morality at length and further grounded it as a guiding principle in the interpretation of the constitution.

Article 370 has been amended before through presidential orders. How do those instances differ from the current situation?

Art 370 was modified in earlier occasions. In an earlier case, Puranlal Lakhanpal vs The President Of India, the petitioner argued that the six seats are allotted to the State of Jammu and Kashmir in the House of People (Lok Sabha) and election to those seats should ordinarily have been by direct election under Art. 81(1) of the Constitution but the President modified the Article under Art. 370(1); that this modification amounted to a "radical alteration" in Art. 81 and was not justified under Art. 370(1). The court however held that " there was no radical alteration" in Art. 81 and the President had the power to make the modification which he did. Since this was done by the concurrence of state legislature art 370 is complied with. But the current amendment does not follow this procedure. President amended the procedure under Art 370, bypassing the requirement of a concurrent state legislature, by colorably amending Art 367 by substituting the Governor in the place of a legislative assembly of the state which radically changes Art 370, This does not satisfy the test of SC judgment. It is colorable because the president cannot amend art 367, after 3 years since the amendment of art 367 and 372(3)

How do you think the Court will deal with the challenge to these measures?

Courts in India were not all the time independent. Sometimes it goes with the executive with a comfortable majority and sometimes it firmly decides. In ADM Jabalpur case the Supreme Court during emergency period upheld notification taking away Article 20 and 21 by taking a stand of executive. On the other hand in Indra Vs Rajnarayanan case and Minerva Mills case it took a firm stand against executive and legislature by striking down Constitution 39th and 42nd Amendment.

One has to wait and watch what stand the Supreme Court takes in this case.