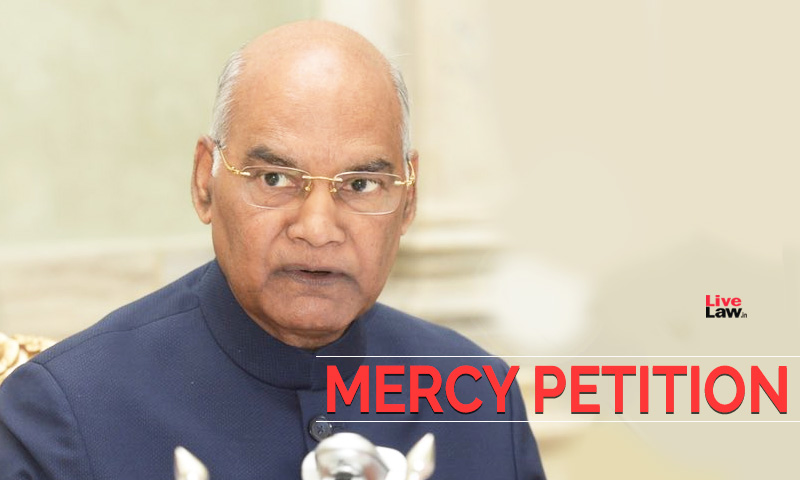 Few days ago, two of the death row convicts in the Nirbhaya case submitted mercy petition before the President of India.After the dismissal of their curative pleas by the SC, this is the last remedy available to them to avoid the gallows. In this backdrop, let us analyze the legal framework of mercy power.Provisions under Indian LawIt may be noted that Article 72 of the...

Few days ago, two of the death row convicts in the Nirbhaya case submitted mercy petition before the President of India.

After the dismissal of their curative pleas by the SC, this is the last remedy available to them to avoid the gallows. In this backdrop, let us analyze the legal framework of mercy power.

It may be noted that Article 72 of the Indian Constitution deals with the power of President to grant pardons, to suspend, remit or commute sentences in certain cases. Under this article, President alone has the sole authority to grant mercy petition in criminal cases on the aid and advice of the council of ministers. Also, Article 161 of the Indian Constitution grants power to the Governor to grant pardons, to suspend or remit or commute sentences of any person convicted of any offence against any law relating to matter to which the executive power of the State extends.

In Maru Ram v. Union of India, the apex court said that Articles 72 and 161 of the Constitution of India can be exercised by the Central and State Governments, not by the President and Governor on their own. The advice of the appropriate Government binds the Head of the State. This was reiterated by the apex court in the case of Dhana v. State of West Bengal.

In Kehar Singh and Anr. v. Union of India, the Supreme Court said that it is appropriate that in the matter of life and personal liberty, another degree of protection should be extended by entrusting power further to some high authority to consider the option of commutation. The power so entrusted is a power belonging to the people and lies in the highest dignitary of the State.

"The power to pardon is a part of the constitutional scheme and it should be so treated also in the Indian Republic. It has been reposed by the people through the Constitution in the Head of the State, and enjoys high status. It is a constitutional responsibility of great significance, to be exercised when occasion arises in accordance with the discretion contemplated by the context".

As regards this power, the Court observed the following things :

1. The power to pardon rests on the advice tendered by the Executive to the President, who, subject to the provisions of Art. 74(1) of the Constitution,  must act in accordance with such advice.

2. It is open to the President in the exercise of the power vested in him by Art. 72 of the Constitution of scrutinise the evidence on the record of the criminal case and come to a different conclusion from that recorded by the court.

4. He acts under a constitutional power, the nature of which is entirely different from the judicial power and cannot be regarded as an extension of it.

5. The practical effect of the Presidential act is to remove the stigma of guilt from the accused or to remit the sentence imposed on him.

6. There is no right in the condemned person to insist on an oral hearing before the President. The proceeding before the President is of an executive character, and when the petitioner files his petition, it is for him to submit with it all the requisite information necessary for the disposal of the petition. He has no right to insist on presenting on oral argument.

7. The manner of consideration of the petition lies within the discretion of the President.

The limitations of judicial review over exercise of powers under Articles 72 and 161 of the Constitution have been delineated in Maru Ram v Union of India by the constitution Bench. It has been observed that all public power, including constitutional power, should not be exercised arbitrarily or mala fide. The bench stressed the point that the "power being of the greatest moment, cannot be a law unto itself but it must be informed by the finer canons of constitutionalism".

The bench in Maru Ram case also noted that the power conferred by Article 72 is a high privileged power vested by the Constitution in the highest functionary of the Union. It was also held that while exercising the power of judicial review, the Court shall keep in mind that where a power is vested in a very high authority, it must be presumed that the said authority would act properly and carefully after an objective consideration of all the aspects of the matter.

Higher the power the more cautious would be its exercise, observed the Court.

In Epuru Sudhakar & Anr. v. Govt. of A.P. & Ors., the apex court said that it is well settled that the exercise or non-exercise of pardon power by the President or Governor, as the case may be, is not immune from judicial review. The court held that :

"Judicial review of the order of the President or the Governor under Article 72 or Article 161, as the case may be, is available and their orders can be impugned on the following grounds:

(a) that the order has been passed without application of mind;

(b) that the order is mala fide;

(c) that the order has been passed on extraneous or wholly irrelevant considerations;

(d) that relevant materials have been kept out of consideration;

(e) that the order suffers from arbitrariness".

Remission of life sentence was granted by the Governor of UP in Swaran Singh v. State of U.P. to the Minister of the State Legislature Assembly convicted for the offence of murder. The Supreme Court in this case quashed the Governor's order and said that if clemency power has been exercised in absolute disregard of the "finer cannons of constitutionalism", such an order cannot get approval of law and in such cases, the "judicial hand must be stretched"

When there is delay in disposal of mercy petition :

There used to exist a lot of judicial confusion regarding the consequence of delay in the disposal of mercy petitions.

There were conflicting judgments on whether such delay would entitle a death row convict to seek commutation of capital punishment. This debate was authoritatively settled in the 2014 decision in Shatrughnan Chauhan &Anr. v. UoI.

Here, the apex court held that the condemned prisoner's death sentence can be commuted to life imprisonment if there is inordinate delay in deciding the mercy plea. In this judgment, a three- judge overruled the decision of a two-judge bench in the case of Devender Pal Singh Bhullar & Anr. v. State of NCT of Delhi, which had held that the delay in deciding mercy plea cannot be a ground for commutation of death sentence.

In Shatrughnan Chauhan, the Court observed :

"Keeping a convict in suspense while consideration of his mercy petition by the President for many years is certainly an agony for him/her. It creates adverse physical conditions and psychological stresses on the convict under sentence of death. Indisputably, this Court, while considering the rejection of the clemency petition by the President, under Article 32 read with Article 21 of the Constitution, cannot excuse the agonizing delay caused to the convict only on the basis of the gravity of the crime".

"if there is undue, unexplained and inordinate delay in execution due to pendency of mercy petitions or the executive as well as the constitutional authorities have failed to take note of/consider the relevant aspects, this Court is well within its powers under Article 32 to hear the grievance of the convict and commute the death sentence into life imprisonment on this ground alone however, only after satisfying that the delay was not caused at the instance of the accused himself".

On this basis, the bench commuted the death sentence of 13 prisoners.

The Court in this case also made a significant pronouncement that seeking mercy is a Constitutional Right of the convict.

The Shatrughnan case judgment laid down certain procedural guidelines for mercy petition. They are :