When Can A Citizen's Right To Travel Abroad Be Restricted? Explained With Judgments 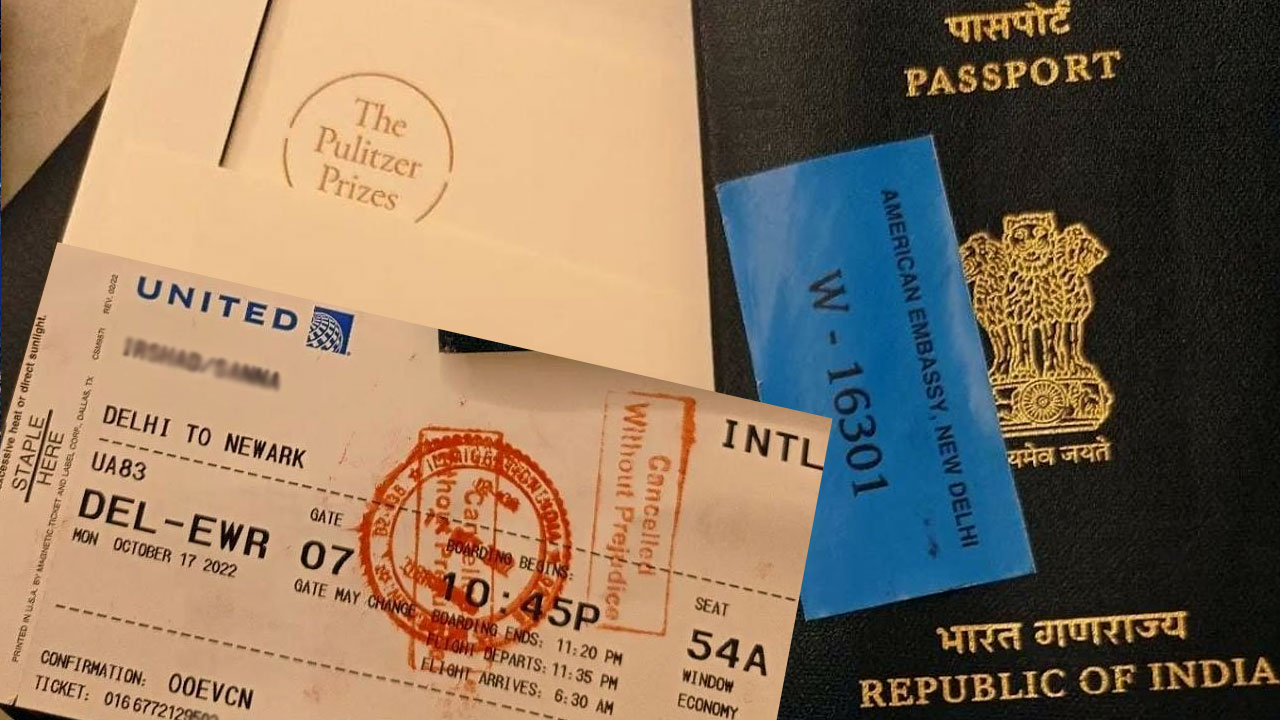 The Pulitzer-winning photojournalist Sana Irshad Mattoo on Tuesday said she was again stopped from travelling to New York. She was on her way to the US to receive the international award when she was stopped by the immigration authorities at New Delhi's Indira Gandhi International Airport. In a tweet, she said she was holding a valid US visa and travel ticket.

The 28-year-old was also stopped from travelling to the US in July. Since 2019, the right to travel abroad of a number of Kashmiri journalists including Aakash Hassan, Gowhar Geelani has been restricted by the government. In March this year, journalist Rana Ayyub was also stopped by the immigration authorities and prevented from boarding a flight to London. Chair of Board at Amnesty International India, Aakar Patel too was stopped from leaving India at Bangalore airport in April.

While Ayyub and Patel's right to travel was restricted purportedly in connection with the pending cases against them and they subsequently got relief from the courts in Delhi, it is not clear whether Mattoo has any pending FIR against her.

Live Law explains the guidelines which govern the issuance of Look Out Circulars, that are employed to prevent a person from travelling abroad, and decisions of various courts in this regard.

The right to travel is a part of personal liberty under Article 21 of the constitution. The Supreme Court in April 2019 said, "The right to travel abroad is an important basic human right for it nourishes independent and self-determining creative character of the individual, not only by extending his freedoms of action, but also by extending the scope of his experience." However, as is well settled, even fundamental rights can be restricted "according to the procedure established by law".

The 1967 Act provides for issuance of passports and travel documents. Under Section 10A of the Act, the passport or travel documents can be suspended in certain cases by the central government "in the interests of the sovereignty and integrity of India, the security of India, friendly relations of India with any foreign country, or in the interests of the general public". The departure of a person can be prevented by an imigration authority on receiving intimation from the designated authority or central government.

The Centre in 1979 issued guidelines for issuance of look out circulars in respect of the arrival and departure of people whose travel the investigating agencies want restricted or banned. The guidelines were amended in 2010 in pursuance of Delhi High Court's judgements in Vikram Sharma vs Union of India and Sumer Singh Salkan versus Asstt. Director & Ors. While there have been many modifications in the guidelines since then, they were reviewed last in February 2021 by the Ministry of Home Affairs.

An LOC against a person is opened by the Bureau Of Immigration (BoI) after receiving a request from the competent authority, who are senior officers in the central government or law enforcement agencies. A district magistrate or a superintendent of the police can also get an LOC issued. The criminal courts can also order issuance of LOC. The legal liability of the action taken by immigration authorities in pursuance of the LOC rests with the originating agency, as per the guidelines.

"Recourse to LOC is to be taken in cognizable offences under IPC or other penal laws. The details … in the enclosed Proforma regarding 'reason for opening LOC' must invariably be provided without which the subject of an LOC will not be arrested/detained".

The guidelines make it clear that in cases where there is no cognizable offence under IPC and other penal laws, the LOC subject cannot be detained or arrested or prevented from leaving the country. In such cases, the originating agency can only request that they be informed about the arrival or departure of the subject.

However, the guidelines also state that LOCs can be issued and departure can be declined even in such cases which may not be covered under the guidelines, if departure of such person is considered "detrimental to the sovereignty or security or integrity of India or that the same is detrimental to the bilateral relations with any country or to the strategic and/or economic interests of India or if such person is allowed to leave, he may potentially indulge in an act of terrorism, or offences against the State and/or that such departure ought not be permitted in the larger public interest at any given point of time."

Till subsistence of the LOC, the immigration authorities are bound to stop the persons against whom it has been issued. "The LOC opened shall remain in force until and unless a deletion request is received by BoI from the Originator Itself," as per the guidelines.

The Originator is required keep reviewing the LoCs on quarterly and annual basis and thereafter immediately submit any proposal for deletion to the BoI.

In its decision on a petition challenging the LOC issued against a person whose family members are accused in a case being probed by the Central Bureau of Investigation and Enforcement Directorate, the Delhi High Court on July 4 said, "unless a citizen is suspected to be involved in the commission or facing investigation or trial on the accusation of offences which are cognizable under the Indian Penal Code or other Statutes, the citizen can neither be detained, arrested or prevented from leaving the country and the originating agency can only seek intimation of his arrival and/or departure."

Justice Mukta Gupta in the order observed that when it comes to 'LOC of intimation', the authorities at the airport or any other port of departure or arrival "cannot restrain or detain the person on the pretext that intimation of his arrival or departure is required to be given to the originating agency which would indirectly serve as a detentive/ preventive LOC."

The court made the observations after interpreting the guidelines or Office Memorandum dated 27th October, 2010 of the MHA. However, the OM issued in February 2021 makes it clear that departure of a person from India can be declined in exceptional cases, even in absence of FIR.

Punjab and Haryana High Court on April 5 said the guidelines do not provide for supply of the LOC to the person against whom it has been issued. The non-supply of reasons for issuing LOC , and absence of a post decisional hearing to the subject of the LOC, is not just, fair and reasonable procedure, said the court, while holding it to be violative of Article 21 of the Constitution of India.

"It may be that before issuing the LOC the respondent [authorities] may not wish to issue a prior notice to the subject of the LOC like the petitioner because there is every possibility that, after receiving such notice, the subject may clandestinely leave the country," said the court.

However, it further said: "But we see no impediment to give a post decisional opportunity to the petitioner by supplying to the subject of LOC, the copy of the LOC, and the reasons for issuing it so that the subject of the LOC can take legal recourse to challenge it."

The Karnataka High Court in a judgement passed on August 24 said the statutory sanction for issuance of LOC can be traced to Section 10A and 10B of the Passports Act. The object for issuance of LOC is to ensure that the subject of LOC becomes available for interrogation, trial or any inquiry, it said.

The court rejected a contention that a notice ought to be issued to the subject of the LOC prior to issuance of LOC. However, it added: "At the time when he is stopped and handed over to the originator, he is, in the considered view of this Court, entitled to know why his travel is being stopped with a copy of the LOC handed over to his hands".

On January 12, Justice Rekha Palli of Delhi High Court rejected the Centre's argument that a writ court under Article 226 of the Constitution of India should not review the decision to issue LOC. "In fact, in case it is found that the decision of the authorities is without application of mind to the relevant factors, the Court can, and in fact, should come to the rescue of the individual," said the court

The court also said, "the issuance of a LOC is an extremely severe step and when purportedly issued in exceptional circumstances, on the ground of the departure of the person being 'detrimental to the economic interests of India', the authorities must tread with caution. Once this Clause itself is meant to be used in exceptional circumstances, it cannot be permitted to be used in such a mechanical manner, as in the present case".

Relying on Delhi High Court's 2010 decision in Sumer Singh Salkan versus Asstt. Director & Ors, the Karnataka High Court on August 29 in 2019, said: "recourse to lookout notice can be taken by the investigating agency in cognizable offences under IPC or the other penal laws, where the accused was deliberately evading arrest or not appearing in the trial court despite NBWs and other coercive measures and there was likelihood of the accused leaving the country to evade trial/ investigation."

Quashing the LOC against journalist Rana Ayyub, the Delhi High Court on April 4 said, "The impugned LOC is accordingly liable to be set aside as being devoid of merits as well as for infringing the human right of the Petitioner to travel abroad and to exercise her freedom of speech and expression".

In Aakar Patel's case where the LOC was issued by CBI, the Special Judge (PC Act) on April 16 said, "In the scheme of CBI Crime Manual, provision and procedure for LOC is introduced to deal with absconders. It is with respect to the absconding accused that when suspicion arises that the absconding accused may flee from the country, LOC can be issued to thwart any such attempt. So a wanted accused, absconding to join investigation is the pre-condition for issuance of LOC during investigation."

The court in that order also said that investigation has been complete in the case against him and the matter is at the stage of consideration of the charge-sheet by the trial court for cognizance. "Once the matter is in the Court, circumstances warranting opening of LOC will arise only when the respondent accused does not appear in the Trial Court despite NBWs and other coercive measures," said the Special Judge.

The trial court order has been challenged by the CBI before Delhi High Court. Issuing notice on CBI's plea, the high court on May 13 said the trial court observations will not come in the way of implementation of the guidelines issued by MHA last year. CBI in its petition has called the issuance of LOC a "lesser form of coercive measure" to ensure that an accused is available to the face the process of law. The agency has also argued that it draws the power to issue an LOC from the CBI manual.

Agreeing with an argument that the Office Memorandum on LOCs cannot be described as "law", Justice Rajiv Shakdher in 2015 said, "This submission, I must confess, has much merit in view of the decisions of the Supreme Court both in Maneka Gandhi case as well as in the case of A.K. Gopalan. Both judgements take the view that "law" referred to in Article 21, would mean "enacted law"."