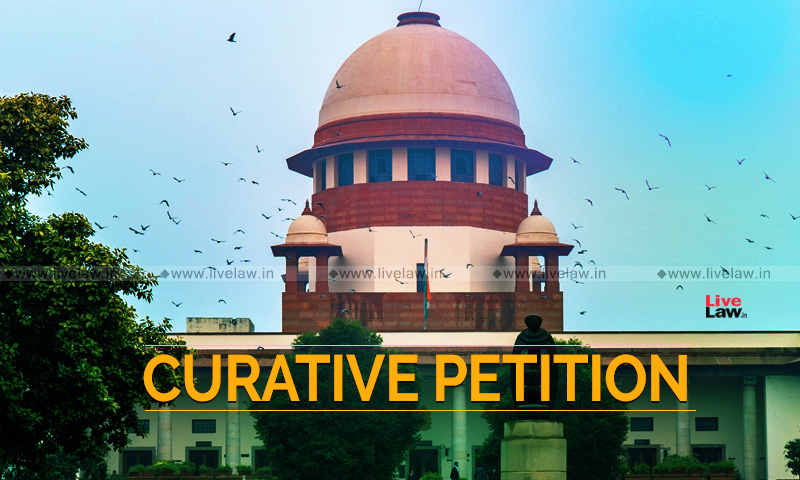 Curative petition is the last constitutional remedy available to a person whose review petition has been dismissed by the Supreme Court.Though the Constitution explicitly speaks about the review power of the Supreme Court under Article 137, it is silent about 'curative power'. The curative petition was given shape and form in the case of Rupa Ashok Hurra v. Ashok Hurra & Anr.,where the...

Curative petition is the last constitutional remedy available to a person whose review petition has been dismissed by the Supreme Court.

Though the Constitution explicitly speaks about the review power of the Supreme Court under Article 137, it is silent about 'curative power'.

The curative petition was given shape and form in the case of Rupa Ashok Hurra v. Ashok Hurra & Anr.,where the apex court reconsidered its judgment in exercise of its inherent power to prevent abuse of its process and to cure a gross miscarriage of justice.

It was explained in the said decision that the curative power of the Court flows from Article 142 of the Constitution, which gives Court power to do complete justice.

"The Court, to prevent abuse of its process and to cure a gross miscarriage of justice, may re-consider its judgments in exercise of its inherent power", observed the 5-judge bench in that case.

The apex court, in this case, observed that the powers conferred on the court by the said article is curative in nature and cannot be interpreted as powers which authorize the court to ignore substantive rights of a litigant while dealing with a case pending before it. This power of the court cannot be used to replace the essential law applicable to the case or case under consideration of the court.

" We are of the view that though Judges of the highest Court do their best, subject of course to the limitation of human fallibility, yet situations may arise, in the rarest of the rare cases, which would require reconsideration of a final judgment to set right miscarriage of justice complained of. In such case it would not only be proper but also obligatory both legally and morally to rectify the error."

When and how to file curative plea is very well laid down in the Rupa Hurra case. In this case, the 5-judge Constitution bench considered the question whether an aggrieved person is entitled to any relief against a final judgment/order of the apex court after dismissal of the review petition, either under Article 32 of the Constitution or otherwise.

Except when very strong reasons exist, the court should not entertain an application seeking reconsideration of an order of the apex court which has become final on dismissal of a review petition. While acknowledging that it was not possible to enumerate all the grounds on which a curative petition may be entertained, the Court laid down certain broad parameters for exercise of this power.

When can a person apply for curative petition?

A petitioner is entitled to relief under curative petition, if he establishes:

(i) violation of principles of natural justice where he was not a party to the lis but the judgement adversely affected his interests.

(ii) he was a party to the lis, but he was not served with notice of the proceedings and the matter proceeded as if he has the choice.

(iii) wherein the proceedings a Learned Judge failed to disclose his connection with the subject-matter.

(iv) the parties giving scope for an apprehension of bias and the judgement adversely affects petitioner.

In the curative petition thus filed, the petitioner shall assert the grounds mentioned therein had been taken in the review petition and that it was dismissed by circulation. The curative petition should also contain a certification by a Senior Advocate with regard to the fulfilment of the above requirements.

The curative petition thus filed must be circulated to a Bench of the three senior-most Judges and the Judges who passed the judgement complained of (if available). And it is only when a majority of the learned Judges on this Bench conclude that the matter needs hearing that it should be listed before the same Bench which may pass appropriate orders. The court also added that, it shall be open to the Bench at any stage of consideration of the curative petition to ask a senior counsel to assist it as amicus curiae. In the event if the Bench at any stage finds that the curative petition is displeasing, it can also impose exemplary costs on the petitioner.

A curative petition is usually decided by judges in chamber, unless a specific request for an open-court hearing is allowed.

Another speciality is that, there is no limitation period for curative petition. But the Court has said that it must be filed within a "reasonable time".

The apex court in Rupa Hurra case also pointed out that:

"Rectification of an order thus stems from the fundamental principle that justice is above all. It is exercised to remove the error and not for disturbing finality. When the Constitution was framed the substantive power to rectify or recall the order passed by the apex court was specifically provided by Article 137 of the Constitution. And Article 145(c) permitted the apex court to frame rules as to the conditions subject to which any judgment or order may be reviewed. And in the exercise of this power, Order XL of the Supreme Court Rules had been framed empowering the apex court to review an order in civil proceedings on the grounds related to Order XLVII Rule 1 of the CPC. The court is thus not precluded from recalling or reviewing its own order if it is satisfied that it is necessary to do so for the sake of justice".

"Curative petitions ought to be treated as a rarity rather than regular ", Justice Banerjee had added in his concurring judgment in that case.

Some examples of curative petitions being allowed.

In another case, the Supreme Court set aside its own judgment which held that the action of a the woman merely kicking her daughter-in-law or threatening her with divorce would not come within the meaning of "cruelty" under Section 498 A of the Indian Penal Code. The three judge Bench allowed the curative petition filed by the National Commission for Women (NCW) by restoring the Special Leave Petition.

Before the origin of curative petition in Rupa Hurra case, a writ petition was filed under Article 32 of the Constitution in the Supreme Court for the second time in the same case for reconsideration of a final judgment by the court to set aside the miscarriage of justice. This is was done in the case of A.R.Antulay v. R.S. Nayak & Anr.  where the majority judges (5:2) opined that a previous judgment could be recalled under a petition under Article 32 or 136 of the Constitution.

But this view was later doubted, leading to the reference which was answered in Rupa Hurra case. There, the Court said an earlier judgment of the Court cannot be challenged under Article 32 of the Constitution. This was in line with the 1966 decision of a nine-judge bench of SC in Naresh Shridhar Mirajkar and Ors. v. State of Maharashtra and Anr, which held that a judicial order cannot be challenged as violating fundamental rights.

At the same time, the Court in Rupa Hurra gave shape to the contours of curative jurisdiction, in order to do complete justice.

Even though there is a narrow line that differentiate between a curative petition and review petition, the apex court has laid down distinct grounds for filing both these petitions and this makes it evident that both the petitions are different in totality.

Thus it can be said that the idea of the curative petition is a Constitutional remedy which is a last resort that was originated to rectify the decision of the Supreme Court by themselves as a legal and moral obligation in deciding rarest of rare cases.