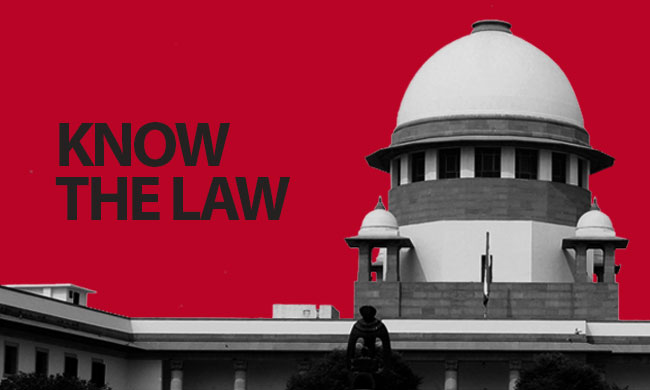 This piece intends to explore the law regarding the territorial jurisdiction of a High Court to issue writ under Article 226 of the Constitution.Article 226 Before Its Amendment Firstly, the legislative history of Article 226 has to be examined. It originally read thus:226. (1) Notwithstanding anything in article 32, every High Court shall have power, throughout the territories in...

This piece intends to explore the law regarding the territorial jurisdiction of a High Court to issue writ under Article 226 of the Constitution.

Article 226 Before Its Amendment

Firstly, the legislative history of Article 226 has to be examined. It originally read thus:

226. (1) Notwithstanding anything in article 32, every High Court shall have power, throughout the territories in relation to which it exercises jurisdiction to issue to any person or authority, including in appropriate cases any Government, within those territories directions, orders or writs, including writs in the nature of habeas corpus, mandamus, prohibition, quo warranto and certiorari, or any of them, for the enforcement of any of the rights conferred by part III and for any other purpose.
(2) The power conferred on a High Court by Clause (1) shall not be in derogation of the power conferred on the Supreme Court by Clause (2) of Article 32.

Interpreting this Article 226, as it stood then, the Supreme Court in Lt. Col. Khajoor Singh vs The Union Of India AIR 1961 SC 532, held that there is two-fold limitation on the power of the High Court to issue writ undesr Article 226, namely,

The Court, in Khajoor Singh further held that the place where the cause of action arose had no relevance for determining the territorial jurisdiction of the High Court. This ruling made the Parliament to amend Article 226(2) which reads as follows (15th Amendment to the Constitution introduced Clause (1-A) to Article 226 which was subsequently renumbered as Clause (2) by the Constitution 42nd Amendment):

"226(2): The power conferred by Clause (1) to issue directions, orders or writs to any Government authority or person may also be exercised by any High Court exercising jurisdiction in relation to the territories within which the cause of action, wholly or in part, arises for the exercise of such power, notwithstanding that the seat of such Government or authority or the residence of such person is not within those territories."

In Jayaswals Neco Limited vs Union Of India, Justice Badar Durrez Ahmed for Delhi High Court has illustrated the effect of this amendment by giving a simple illustration: 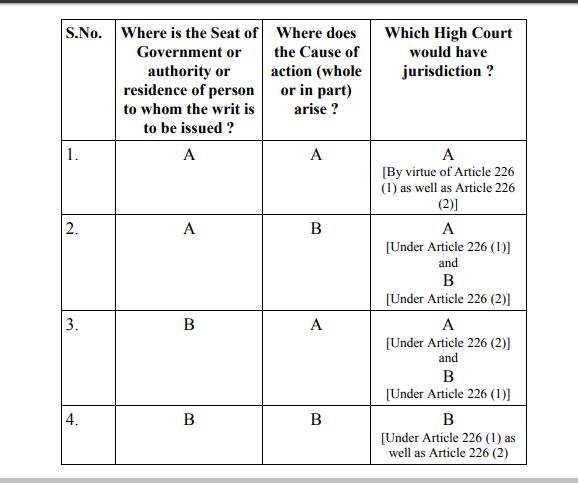 The judge also referred to the Statement of Objects and Reasons appended to the Constitution (Fifteenth Amendment) Bill, 1962, which read as follows

"Under the existing Article 226 of the Constitution, the only High Court which has jurisdiction with respect to the Central Government is the Punjab High Court. This involves considerable hardship to litigants from distant places. It is, therefore, proposed to amend Article 226 so that when any relief is sought against any Government, authority or person for any action taken, the High Court within whose jurisdiction the cause of action arise may also have jurisdiction to issue appropriate directions, orders or writs."

In this judgment, the Supreme Court has observed that the effect of the amendment was that the accrual of cause of action was made an additional ground to confer jurisdiction on a High Court under Article 226 of the Constitution. It observed thus:

"The legislative history of the constitutional provisions, therefore, make it clear that after 1963, cause of action is relevant and germane and a writ petition can be instituted in a High Court within the territorial jurisdiction of which cause of action in whole or in part arises."

What is Cause of Action?

In the restricted sense "cause of action" means the circumstances forming the infraction of the right or the immediate occasion for the reaction. In the wider sense, it means the necessary conditions for the maintenance of the suit, including not only the infraction of the right, but also the infraction coupled with the right itself. Cause of Action can be defined as every fact, which it would be necessary for the plaintiff to prove, if traversed, in order to support his right to the judgment of the court. Every fact, which is necessary to be proved, as distinguished from every piece of evidence, which is necessary to prove each fact, comprises in "cause of action". (Om Prakash Srivastava v. Union of India and Another [(2006) 6 SCC 207])

In Oil and Natural Gas Commission v. Utpal Kumar Basu and Ors., (1994) 4 SCC 711, it was observed that in determining the objection of lack of territorial jurisdiction the Court must take all the facts pleaded in support of the cause of action into consideration albeit without embarking upon an enquiry as to the correctness or otherwise of the said facts. In other words the question whether a High Court has territorial jurisdiction to entertain a writ petition must be answered on the basis of the averments made in the petition, the truth or otherwise whereof immaterial. To put it differently, the question of territorial jurisdiction must be decided on the facts pleaded in the petition.
Some Case Laws
Let us look at some case laws, which illustrate the application of Article 226(2).

Narayan Diwakar was an officer of the Indian Administrative Service, who was officiating as Collector of Daman and then transferred to Arunachal Pradesh. Even prior to the transfer, three First Information Reports were lodged by the Central Bureau of Investigation, at Bombay. The Superintendent of Police, CBI, Anti - Corruption Bureau, Bombay issued a wireless message to the Chief Secretary, Arunachal Pradesh to advise the IAS Officer to meet the Inspector of Police, CBI, ACB, Bombay in connection with the investigation of one of the FIRs. The IAS Officer challenged the same before the High Court at Gauhati, which invoked its jurisdiction under Art.226(2) and quashed the summons. The Supreme Court  held that the Gauhati High Court was clearly in error in deciding the question of jurisdiction in favour of the officer.

In Oil & Natural Gas commission v. Utpal Kumar Basu (1994) 4 SCC 711, ONGC brought out an advertisement calling for tenders to set up a Kerosene Recovery Processing Unit at Hazira Complex in Gujarat. The respondent, based in Calcutta, came to know of the floating of such tender from a newspaper circulated within the Territorial jurisdiction of the Calcutta High Court; applied for the same and later on being denied of consideration, approached the Calcutta High Court against the grant sought to be made in favour of another tenderer. Assuming jurisdiction, the High Court passed an order in favour of the petitioner, which was challenged by the ONGC before the Supreme Court.

The SC held that the fact that the advertisement was read in Calcutta and that the tender and related messages were sent from Calcutta were found to be irrelevant insofar as considering the issue raised in the lis.

The Apex Court expressed the view that none of the facts pleaded to invoke the jurisdiction constituted facts forming an integral part of the cause of action.

Facts having no bearing on the dispute are not part of cause of action.

In Union of India v. Adani Exports (2002) 1 SCC 567, Adani Exports Ltd invoked the jurisdiction of the Gujarat High Court, claiming the benefit of a scheme introduced under the Import Export Policy on grounds that they carried on the business from Ahmedabad.

The SC held that each and every fact pleaded in an application does not ipso facto lead to a conclusion that those facts give rise to a cause of action unless those facts are facts which have a nexus or relevance with the lis involved in the case.

"Facts which have no bearing with the lis or the dispute involved in the case, do not give rise to a cause of action so as to confer Territorial jurisdiction on the Court concerned", the SC held.

Jurisdiction of HC cannot be invoked by challenging constitutionality of a statute in 'vacuum'.

In Kusum Ingots & Alloys Ltd. v. Union of India (2004) 6 SCC 254, a Company having its Registered Office at Mumbai, obtained a loan from Bhopal and challenged the vires of the Securitisation and Reconstruction of Financial Assets and Enforcement of Security Interest Act, 2002 (for short "SARFAESI Act") before the Delhi High Court when proceedings were taken by the creditor Bank under the said Act. The jurisdiction of the Delhi High Court was invoked on the ground that the seat of the Union Government was in Delhi and the High Court of Delhi has the requisite jurisdiction. The Supreme Court found that the jurisdiction of a High Court cannot be invoked to determine a Constitutional question in a vacuum and the same has to be agitated before the High Court, within whose Territorial jurisdiction,the injury was occasioned.

In this case, the appellant was a seaman, registered as such by the Department of Shipping, Government of India, at Mumbai. He was declared unfit for sea faring activities due to his heart condition and his registration was cancelled. On being so discharged, the appellant settled down at his native place, within the State of Bihar, and made representations raising financial claims, as per the statutory provisions and the terms of the contract. The disability compensation claim was answered by the official respondents pointing out his entitlement to severance compensation; but declining any disability compensation as such, which, according to the official respondents, was an entitlement to persons who were disabled in the course of seafaring activities. The dismissal of the writ petition by the High Court of Patna was found to be bad, on the specific facts arising in the aforesaid case.

Cause of action arises at the place where order is passed.

In Kusum Ingots, the SC also held that cause of action arises at the place where the order was passed.

Mere service of order not a part of cause of action

A Full Bench of the High Court of Kerala held that mere service of order at a place is not sufficient to give rise to cause of action for assuming territorial jurisdiction under Article 226(2) of the Constitution (Registrar, Indian Maritime University v Dr K G Vishwanathan and another)

The Full Bench overruled the view expressed by a division bench in Selvin Abraham vs Punjab and Sind Bank that service of notice of dismissal is an integral part of cause of actin.