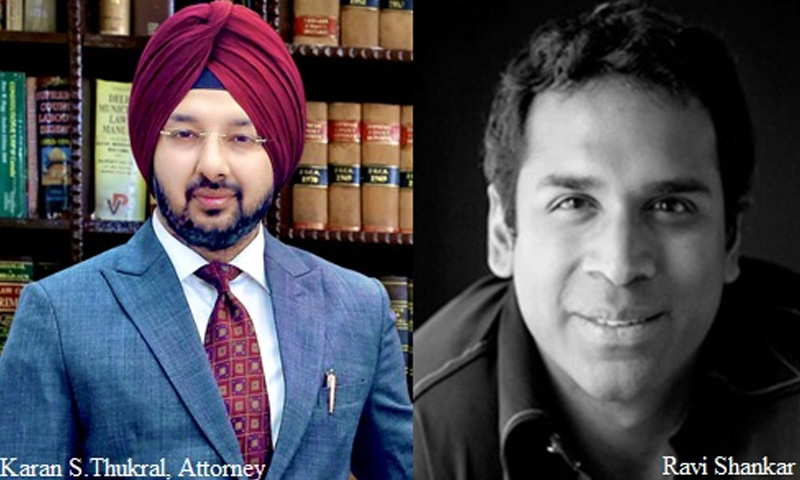 Writer, Poet, Editor and a Professor, Mr. Ravi Shankar, through his legal representative Mr. Karan S. Thukral, Advocate has issued a Legal Notice to the CEO and Editor-in-Chief of the Scroll Media Incorporation against an alleged defamatory article resurfacing on their website.

Shankar has been called a diaspora icon by the 'Hindu' and "one of America's finest youngest poets" by former Connecticut poet laureate Dick Allen. He has been an epitome for propounding Indian literature and expanding its global knowledge through his myriad works including translations of 8th century Tamil poet/ Saint Andal, and the W.W. Norton & Co. anthology "Language for a New Century: Contemporary Poetry from Asia, the Middle East and Beyond"; works which are now used as textbooks across the globe.

Karan S. Thukral informed that the article published in the columns of scroll.in, an infamous digital news publication, contains allegations of sexual misconduct against his client. Allegations which are entirely false, stripped off of a genuine source and based on erroneous facts; the piece has proved to be a blot on Shankar's career and a fictional pull to all his future prospects.

Not that Shankar didn't try to resolve the issue with the news publication, he approached them with sheer intentions and proofs backing up his claims. The executives have however been obstinate and refused any relief to him. A father to two young daughters, muddled between his career and reputation, on advice of Karan S. Thukral, hence issued a Legal Notice to Scroll Media Incorporation and its executive members. He has sought no less than an unconditional apology, recalling of the piece and compensatory damages to the tune of INR 10,000,000 for the harm caused to his public and professional reputation- resulting in loss of business.

"Shankar himself is a father of two girls and well understands more than anyone the need for accountability and finding a cure for the toxic masculinity that has gone unspoken about for too long. However, to equate anything that he has been accused of with what is happening on the ground in India is not just specious, it is dangerous, for it threatens the entire conversation around these issues" says Karan S. Thukral in his Legal Notice.