Corporate Governance And The Case Of PNB Housing Finance 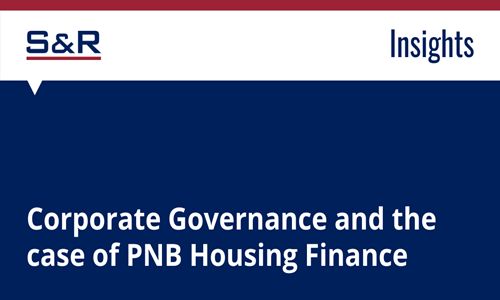 On May 31, the board of PNB Housing Finance approved a preferential issue of equity shares and warrants to certain entities belonging to the Carlyle Group, General Atlantic, Ares SSG, and Salisbusry Investments (a company controlled by Mr. Aditya Puri, the former CEO of HDFC Bank). If the preferential issue is completed, the Carlyle Group will become the company's...

On May 31, the board of PNB Housing Finance approved a preferential issue of equity shares and warrants to certain entities belonging to the Carlyle Group, General Atlantic, Ares SSG, and Salisbusry Investments (a company controlled by Mr. Aditya Puri, the former CEO of HDFC Bank). If the preferential issue is completed, the Carlyle Group will become the company's controlling shareholder with over a 50% majority stake. Further, as required under the SEBI's Takeover Regulations, the Carlyle Group and Salisbury Investments, as "persons acting in concert", have initiated an open offer to public shareholders to acquire an additional 26% of the target company's share capital from public shareholders. Upon completion of the proposed transaction, General Atlantic and Ares SSG will continue to remain minority shareholders. Punjab National Bank, the company's current promoter, will hold a 20% stake in the company.

A proxy advisor has issued a report asking public shareholders to vote against the proposed investment. The report argues that the price at which Carlyle will be investing in the company belies the company's true value. As an alternative to a preferential issue, the report suggests that the company should have considered a "rights issue" in which all shareholders will be entitled to participate. In this context, it is important to consider whether a preferential issue and a rights issue are, in fact, comparable options for fundraising.

In a rights issue, all shareholders are entitled to subscribe to shares in proportion to their existing shareholding in the company. However, there is no certainty that the company will ultimately receive the funds that it proposes to raise. Under the SEBI's Issue of Capital and Disclosure Requirements, 90% of the proposed issue size is required to be subscribed to in a rights issue. If this threshold is not met, the company will need to refund all moneys received towards the subscription. An exception to this rule is available in case: (a) the funds are proposed to be used for capital expenditure, and (b) if the promoters of the company subscribe to their entire rights entitlement. In the case of PNB Housing Finance, this exception will presumably not be available since Punjab National Bank is not a participant in the current fundraise. In contrast, in a preferential issue, companies typically enter into binding subscription agreements with proposed investors which guarantee their participation in the issue at an agreed price.

In a rights issue, companies are required to make extensive disclosures through a draft letter of offer, which is required to be submitted to the SEBI for its approval. It is only after such approval that a company can launch a rights issue. The process can take several months, and there is always a possibility that market conditions may change by the time when the SEBI's approval is finally received. This results in further uncertainty in the fund raising process. Certain companies are eligible to undertake a "fast track" rights issue for which the SEBI's approval is not required. Eligibility for such process is based on the companies' trading record, record in addressing investor complaints, market capitalization, and history of regulatory action against the company and its promoters. Promoters are required to subscribe to their entire entitlement in a fast track rights issue.

A preferential issue, on the other hand, does not require a SEBI review process – the fund raising exercise can be completed within a relatively short period of time. However, in contrast to a rights issue (which will require only a board approval), a preferential issue will need to be approved by shareholders through a 75% majority vote.

Additionally, in case an investor acquires 'control' of a company through a preferential issue (as in the case of PNB Housing Finance and Carlyle), detailed disclosures will need to be made as a part of the open offer process. The SEBI's approval will also be required for the open offer to be completed. However, the company will not be denied of its funds in the interim – the preferential issue will need to be completed within 15 days of shareholder approval. The shares allotted to the investor, however, will be kept in an escrow account until completion of the open offer.

Preferential issues are subject to a minimum subscription price that is calculated based on the historical trading price of the company's stock over a certain period of time. This prevents companies from issuing shares to promoters or to select investors at a discount to the market price, which is not available to other shareholders.

In case of a rights issue, the regulations do not prescribe a minimum subscription price since all shareholders are entitled to participate in the issue at the price determined by the company's board. The issue price is typically at a discount to the market price to encourage shareholders to subscribe to the issue (rather than purchase shares from the market) and to ensure that the 90% subscription threshold is met.

In the case of PNB Housing Finance, the report published by the proxy advisor argues that while the SEBI's pricing formula sets out the minimum price for a preferential issue, the board of directors are also required to determine whether the price is "fair". The report notes that public sector undertakings are generally undervalued and trade at a significantly lower price-to-earnings ratio as compared to their private sector peers. Since the proposed transaction will result in PNB Housing Finance becoming a privately controlled company, it should have been valued accordingly. As evidence, the report points to the drastic increase in the company's trading price after the transaction was announced: the minimum price for a preferential issue as per the SEBI pricing formula was INR384.60; the proposed price for the preferential issue is INR390; the uninfluenced price prior to the announcement of the preferential issue at close of business on May 28 was INR437.70; and as of close of business on June 11, the company was trading at INR817.70.

Considering that Punjab National Bank and the investors in this transaction already hold nearly 85% of the target company's share capital, it can be assumed that the preferential issue will be approved at the company's general meeting on June 22. It will be interesting to see how the public shareholders vote on June 22 – it is entirely possible that they vote in favor of the proposed transaction on the basis that the proposed transaction will enhance the value of their remaining stock even though they will get diluted in terms of their percentage ownership.

On the question of whether the board of directors acted in the best interests of the company and its minority shareholders, it can be argued that a preferential issue offers the benefit of certainty and is also a faster process. On the issue of pricing, it is difficult to hold the board of directors at fault when there is compliance with the pricing guidelines prescribed by the SEBI and the requirement for valuation by a registered valuer is not applicable to preferential issues by listed companies. Indeed, if the proposed transaction had instead been structured as a rights issue with Punjab National Bank renouncing its entitlement to Carlyle, there could well have been a charge that the transaction was a preferential issue in reality and had been structured as a rights issue to obviate the requirement of shareholder approval.

This insight has been authored by Rajat Sethi (Partner) and Sarangan Rajeshkumar (Associate). They can be reached on [email protected] and [email protected] for any questions. This insight is intended only as a general discussion of issues and is not intended for any solicitation of work. It should not be regarded as legal advice and no legal or business decision should be based on its content.