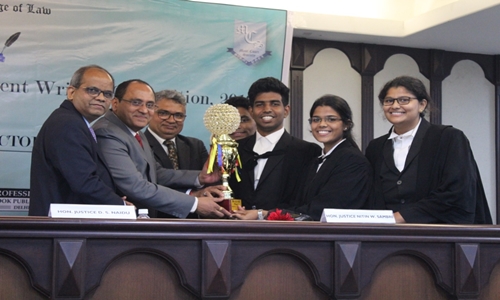 The 10th Edition of the National Trial Advocacy and Judgment Writing Competition, Nyayavalokan, organized by SVKM's Pravin Gandhi College of Law had its Semi-Final and Final Rounds yesterday. From 24 teams, the contest had boiled down to the top 4, as the Semi-Final Rounds of the competition began yesterday.

Two courtrooms constitute the setup for the Semi-Final Rounds with two qualifying teams in each courtroom, one as the counsels for the prosecution and once as counsels for defense.

The rounds started post breakfast, with the participants enthusiastically putting forth their contentions. Students of PGCL acted as witnesses. They were briefed beforehand and trained to take a firm stand when called to the witness box since witnesses are an integral part of any trial. Based on the scores of this Round, the two highest-scoring teams entered the Final Round of the competition

A researcher from each of the 24 participating teams witnessed the proceedings of the Semi-Final Rounds. Based on the contentions of both sides, each researcher had to pen down a judgment. This judgment was expected to include all the essentials a good judgment does. Based on that factor and several other criteria, the judges of the Semi-Final Rounds selected the best two judgments. The Judgment Writing Competition was introduced with an aim to better the analytical and inferring skills of the participants. As students of Law, interpretation of Law and connecting the same with the relevant facts becomes an integral aspect of the process and the Judgment Writing Competition is a step towards inculcating that very habit in future legal practitioners.

A very unique addition to this year's Nyayavalokan was the Late L. R. Chari Memorial Award for the Outstanding Cross-Examiner of the Year instituted by Adv. Rati Amrolia & Yasmin Katpitia, in memory of the first lawyer in the chamber of whom they practiced. Adv. L.R.Chari specialised in criminal trials. The Best Cross-Examiner was decided on the basis of a special round. Based on their performance in the Semi-Final Round, the two best cross-examiners from the top 4 teams were selected. Each of the two cross examiners reappeared before a panel of the 4 judges of the Semi Finals and conducted a cross-examination. They were marked on the basis of their style, confidence and ability to question among other factors. This was the first time this award has been introduced in the 10-year old history of the National Trial Advocacy and Judgment Writing Competition of SVKM's Pravin Gandhi College of Law.

The top 2 teams gave their best in the final rounds, impressing the judges greatly. The closing statements of the counsels from both sides were so strong, that it was a tough choice for the bench to select one team which prevailed over the other.

The Valedictory and Prize Distribution Ceremony was held as soon as the Finals were over. The Honourable Justices of the Bombay High Court felicitated the winners of Competition.

The full list of winners of the 10th Edition of the National Trial Advocacy and Judgment Writing Competition of SVKM's Pravin Gandhi College of Law, Nyayavalokan 2019, is as follows:

The Honourable Justices then addressed the gathering and shared a few words of wisdom. The Lordships stressed on the importance of trials and how it forms the base for any legal proceeding. They also emphasized on how every aspiring lawyer should begin their careers by practising in lower courts in order to understand the system better. Justice Naidu delved upon the importance of reading and understanding the basics of any subject in order to become masters of the same. He also motivated and encouraged budding lawyers to set a goal for themselves and work passionately in order to achieve them.

The address by the Judges was followed by the Core Committee of the Moot Court Society delivering the official closing address of the 10th Edition of Nyayavalokan. The Chairpersons of the Moot Court Society, Ms. Jesica Thakkar and Ms. Ayonee Madhani thanked the entire staff of Pravin Gandhi College of Law, teaching and non-teaching, the Organising Committee of Nyayavalokan, the Advisory Committee of Nyayavalokan, the sponsors and finally all the Judges and Participants who extended their unconditional support and cooperation to make the Competition a success. A special thank you was extended towards the faculty in-charge of the Moot Court Society of Pravin Gandhi College of Law, Dr. Geeta Kubsad for being the backbone of the Organising Team of the event.

With this, the Core and Organising Committee of the 10th Edition of the National Trial Advocacy and Judgment Writing Competition of SVKM's Pravin Gandhi College of Law, Nyayavalokan 2019 signed off, promising to come back with a Nyayavalokan 2020 much grander and bigger.