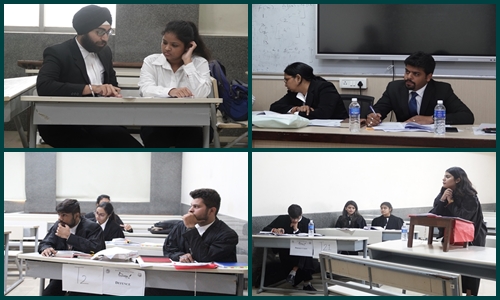 The 10th Edition of the National Trial Advocacy and Judgment Writing Competition, Nyayavalokan, organized by SVKM's Pravin Gandhi College of Law was inaugurated last evening with high spirits. The Inauguration Ceremony was followed by draw of lots of the teams for the Preliminary Rounds.

Today, on October 11, the 10th Edition of Nyayavalokan is finally beginning with its Preliminary Rounds. The Preliminary Rounds will be followed by the Quarter Final Round, Semi-Final Rounds and lastly the Finals. The teams will also take part in a Judgment Writing Competition, based on the Moot Proposition and the proceedings of the Competition.

The schedule for the competition is as follows:

The Preliminary Rounds flagged off post a witness briefing session. Students of PGCL will participate in the competition and support the teams as witnesses, bailiffs and stenographers and courtroom officers.

The format of the Preliminary Rounds is carefully articulated by the Organizing Committee after keeping in mind the number of teams participating. 24 teams from across the country have participated in the 10th Edition of Nyayavalokan. The Preliminary Rounds are divided into 2 slots with 12 courtrooms in each slot. Each team will participate in each of the two slots, once as prosecution and once as defence. The first slot will be followed by lunch, post which the second slot will begin.

The first slot of Preliminary Rounds saw the teams advancing arguments, examining and cross-examining witnesses with utmost conviction and enthusiasm. The Judges were not only impressed by the utmost zeal with which the teams put forth their arguments, but also by their in-depth knowledge and understanding of the points of law around which the present moot proposition revolves.

The second round of the Preliminary Rounds began post-lunch. All 24 teams competed with one another once more. Just as they were judged in the First Slot, each team member is judged on various criteria's, based on which they will be marked and scored. At the end of the two rounds, based on their scores of both rounds, only the top 8 teams from the 24 will enter the Quarter Final Rounds which will be held tomorrow.