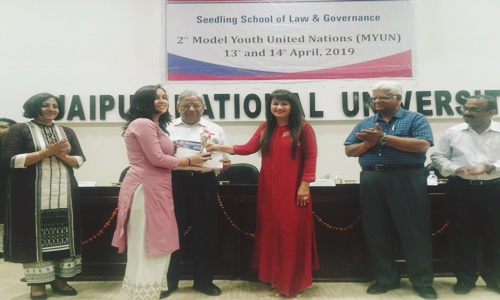 The second edition of Model Youth United Nations concluded with the valedictory ceremony at Seedling School of Law and Governance, Jaipur National University, on Sunday (April 14). The 2-day event saw the participation from almost 200 students from across India.

The Chief Guest for the opening ceremony IAS officer Mr. Alex Paul Menon, CEO ChiPs, emphasized upon the contribution of such sessions to improve the debating and negotiation skills of students. These skills play a vital role at the time of stating arguments during in the making of a public policy, said Mr Menon. He said that he believed in the holistic development of students with the latest academic and social skills and global exposure.

Training sessions held prior to the event gave the young delegates crystal-clear picture of the UN and Lok Sabha procedures. Over the course of two days, the delegates debated, discussed, caucused and wrote resolutions on their topics. The brainstorming session brought about ideas and perspectives put across by student delegates on burning topics of rights and discrimination against lgbt community, international terrorism" and caste-based reservation. Students from different parts of India attended the event. They were judged on their ability to negotiate, think and listen.

In the valedictory ceremony, Dr. T.N. Mathur, Director, Dr. Mithilesh Vishwakarma, Head of the Department, Mrs. Komal Audichya, Senior Coordinator Seedling School of Law and Governance, addressed the gathering. The ceremony progressed as the participating committees submitted their draft resolutions to be sent over to the UNDESCO and the executive board members distributed prizes to the winners.