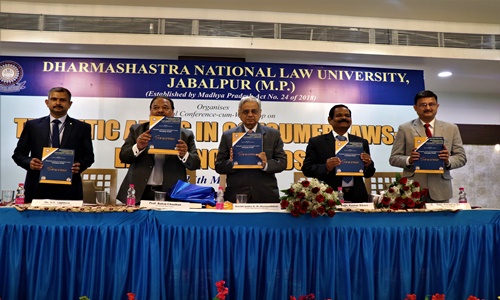 Dharmashastra National Law University, Jabalpur, is organising a National Conference-Cum-Workshop on 'Thematic Areas in Consumer Laws: Emerging Trends' on 14th and 15th March 2019. The event is scheduled on the occasion of World Consumer Day on March 15th.

Hon'ble Justice Dharmadhikari opened his speech by saying that earlier, consumers were the most neglected lot and have no say in the market. In the year 1962, a decision was taken to celebrate the Consumer Rights Day. He further talked about the history of the committee formed on Consumer Rights. He also highlighted the issues of protection of consumer rights in the contemporary scenario of globalisation. He also emphasised on the importance of the role of law students as future lawyers and a dire need of Ombudsman was raised.

The second session was chaired by Sri S.N Khare. He discussed the Consumer Protection Amendment Bill 2018. He looked into the practical aspects of the bill. Having been posted in the District Consumer Forum for the last one year, he has come across various problems in the functioning of the consumer forum. One of the major problems he sighted is the delay in the grievance redressal, over which he referred to one of one of the participants who was among one of those consumers whose grievance is pending to be redressed for past 5 years. He proposed certain recommendations in this line such as class action law suits, which is practiced in jurisdictions like the US.

The third session on medical negligence was chaired by Prof. Joga Rao, NLSIU, Bangalore. He mentioned that the irony is that while the country which gave the 'Bolam test' has already given it up but India still goes by it. Most often, the essence of the judgment never trickles down to the lower courts.

The session also witnessed lawyers and doctors sharing their experiences on cases of medical negligence.