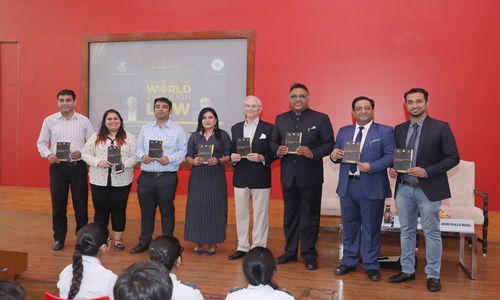 On 17th October 2019, Jindal Global Law School launched the country's first 3-year B.A. Hons. programme in Legal Studies. The programme aims to nurture legal imagination while building a sound understanding of history and organization of legal systems from national, international and comparative perspectives and will be offered by O.P. Jindal Global University's law school. It builds...

The programme aims to nurture legal imagination while building a sound understanding of history and organization of legal systems from national, international and comparative perspectives and will be offered by O.P. Jindal Global University's law school. It builds on the efforts of the Indian high school education system, which has introduced "Legal Studies" as a course in recent years.

The launch of the first multi-disciplinary undergraduate programme in Legal Studies was preceded by a lecture on 'Changing the World Through Law' by Professor Stephen P. Marks, Francois-Xavier Bagnoud Professor of Health and Human Rights, Harvard University and a special address by Professor (Dr.) C. Raj Kumar, Founding Vice-Chancellor, JGU and Dean, Jindal Global Law School.

The B.A. (Hons.) programme in Legal Studies strives to familiarise students with major legal and political discourses, while imparting skills essential for the performance of pre-legal and paralegal works as well as preparing them for careers in law, judiciary, academia, research and public service. Its holistic training seeks to develop, in students, a strong legal and social sciences research foundation. It enables them to express opinions on legal issues concisely and clearly, to identify, analyse and address legal problems and assess the social impact of law. The programme will begin admitting students from the academic year 2020-21.

Articulating on the role of lawyers in the freedom struggle, the Vice Chancellor Prof. Kumar, spoke of lawyers as torchbearers of social transformation and nation building. Lawyers played a central role in the drafting of the Indian Constitution. The Constitution Assembly proceedings clearly demonstrates the part played by the lawyers in elaborating the basic concepts of freedom, equality and justice.

Professor Marks reflected on his own youth and that attracted him to the study of law, eventually earning a B.A. (Law) from Stanford University, and on the role of law in his professional life, not as a typical lawyer in private practice or a law firm but in public service where law figured prominently.

The event was attended by over 400 high school students and their teachers and counsellors. The Vice-Chancellor felicitated the school teachers and ignited the students' aspirations to become teachers and professors of the future while expressing his concern for Indian society where very few bright people want to take up teaching as a profession.