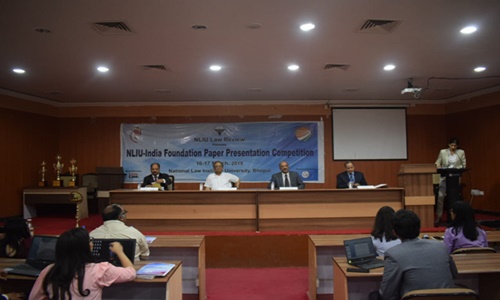 The NLIU-India Foundation Constitutional Law Symposium commenced yesterday with paper presentations from students from all over India. Out of over 80 submissions received, the organizers shortlisted 8 outstanding papers to be presented at the Symposium via a thorough review process.The day began with an inaugural ceremony, graced by the chief guest, Prof N.L. Mitra (Former Director, National...

The NLIU-India Foundation Constitutional Law Symposium commenced yesterday with paper presentations from students from all over India. Out of over 80 submissions received, the organizers shortlisted 8 outstanding papers to be presented at the Symposium via a thorough review process.

The day began with an inaugural ceremony, graced by the chief guest, Prof N.L. Mitra (Former Director, National law School of India, Bangalore and Founder Vice Chancellor, National Law University, Jodhpur), Major General Dhruv Katoch (Director, India Foundation), Prof. V Vijayakumar (Vice Chancellor, NLIU), and Prof. Ghayur Alam (Dean, Academics, NLIU). After the traditional lighting of the lamp ceremony, Major Katoch addressed the student body. He pointed out that as such events are usually reserved for Delhi, NLIU and India Foundation have partnered to break this trend. Prof. Mitra, in his address to the students, expressed his pleasure at being a part of this novel event, and detailed his journey from the world of economics to the realm of law. Prof. Vijayakumar shared his views about the Indian constitution being "one of the best written constitutions in the world, one which citizens should read regularly". Prof. Alam outlined his take on the essence of the Constitution, which is to question everything and everyone, particularly the ones in power.

The first presentation of the day, titled "Does Your God Satisfy the Constitutional Test?" dealt with the controversial Sabarimala verdict. The speakers took the stand that the core belief of the devotees of Sabarimala is not the alleged impurity of menstruating women, but a unique brand of celibacy practiced by Lord Ayyappa. The speakers advocated that preference be given to religious practices in case of conflict between them and government regulations, with exceptions made when the practices have crossed the intolerable degree threshold.

The second presentation of the day, "Relooking at the Admissibility of Illegally Obtained Evidence", outlined the need for revamping of our evidentiary laws with respect to admissibility of evidence. The speaker contended that there should be a balance between human dignity and the weight of the evidence.

The next presentation, "How Islam and Article 25 Jibe Against FGM" dealt with the controversial topic of female genital mutilation, practised by specific communities. The speakers elaborate how the practice cannot be protected under Article 25 as it does not pass the essential religious practice test, and is hence not sanctioned by Islam.

The presentation titled "Essential Religious Practices with respect to Sabarimala" discussed the various definitions and understandings of religion in legal parlance. The speaker further discussed the doctrine of essential religious practice evolved by the courts and examines how it is violative of the right to freedom of religion with special emphasis on the Sabrimala judgement.

The fifth presentation, "Gulping the Spike: Rationalizing AFSPA", described the various sections of the AFSPA and their operations. It raised the question of whether the Courts have the institutional competence to delve into matters of National security and whether there is a constitutional basis for courts to exercise review jurisdiction over military actions.