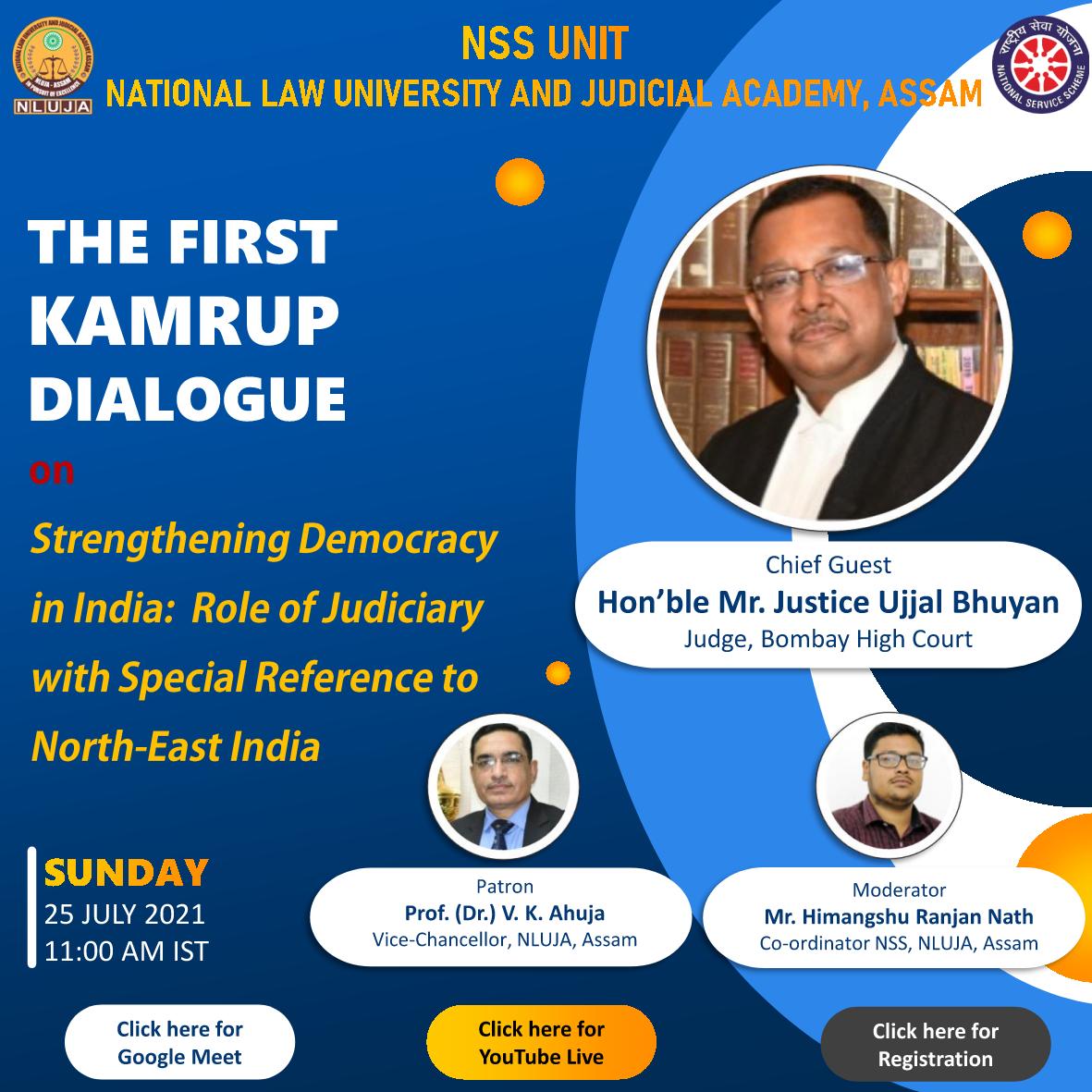 "Any form of alteration or hamper caused to the concept of judicial review will be detrimental to the role of independent judiciary": Hon'ble Justice Bhuyan in a webinar organised by NSS unit of NLUJAA By: (i) Devanshi Srivastava (ii) Prakhar Prabhat Srivastava, the Volunteers of NSS unit of NLU, Assam. The NSS Unit of NLU, Assam organized the First Edition of the...

"Any form of alteration or hamper caused to the concept of judicial review will be detrimental to the role of independent judiciary": Hon'ble Justice Bhuyan in a webinar organised by NSS unit of NLUJAA

By: (i) Devanshi Srivastava

He began the discussion with the idea of the making of the Constitution which was given to India on 26th January, 1950. The Constitution aims at bringing equality in the society in percolating the idea of integrity of the society. The Preamble captures the essence of democracy and is the source of the Constitution. In S.R. Choudhary v. State of Punjab, he quotes that the judgement draws the line of demarcation between the Executive, Legislature and the Judiciary.

He quoted the motto of democracy, "government by the people, of the people and for the people". As per the Lordship, it is the fundamental of a democratic country. He views the court process as inherently democratic. The role of the constitutional court in the role of review is not for Perfection but for Protection. Two democratic features are- Right to Vote and protection of electoral rights.

His Lordship heralded that in a democracy, the participation of citizens in a democracy has to be continuous in nature in bringing about just democracy. The presence of limits on constitutional power helps in increasing the accountability of the government. As per His Lordship, the Judiciary is the guardian and protector of the constitution. Rule of Law and Democracy of the Nation are connected as the Umbilical Cord.

Sovereignty of the people and the Substantive Democracy of the People are two normative bases of Justice as stated by Justice A.K. Sikri.

He enumerated various landmark judgements to substantiate his opinions. Such as in the Golaknath case, the 11 Judge Bench, overruled the previous cases and held that the power of the Parliament is restricted and cannot alter the Fundamental Rights. In the landmark case of Kesavananda Bharati, a 13 Judge Bench, where the majority held that the basic constitution cannot be changed, resulting in the change of its identity. Thus, the decision of Golaknath was overruled. Amendment postulates the existence of the old constitution in presence of the amended constitution with new provisions.

His Lordship emphasized the Amendment of the election procedure of the higher authorities. In the Indira Nehru Gandhi case, a unanimous decision was taken in light of amending the election procedure for a just and fair election. In Minerva Mills v. The Union of India which stated that limitations on the parliament for amendments are constitutional in upholding the basic structure of the constitution. He opined that the dynamic of the judiciary should be open to discussion for enhancing the role of the independent judiciary.

His Lordship specified the role of Judicial review and any form of alteration or hamper caused to it would be detrimental to the role of independent judiciary. He stipulated that the voters must have a discretion to not to vote for any candidate as per their own judgement.

At the end of his speech, His Lordship quoted the words of Dr. Rajendra Prasad, "We have prepared a democratic constitution but the successful working of the constitution depends upon the willingness of the people to work together, capacity to compromise and accommodate the spectrum of opinions."

The Vice-Chancellor of NLUJA V.K. Ahuja greeted the Hon'ble Chief Guest and gave the opinion of institutionalized courts and the effectiveness of mediation in resolving conflicts in North- Eastern India.

The event was moderated by Mr. Himangshu Ranjan Rath, Assistant Professor of Law, and Program Coordinator, and convened by Mr. Aditya Trivedi and the Head of NSS Unit of NLU, Assam Mr. Pranav Gandhi.