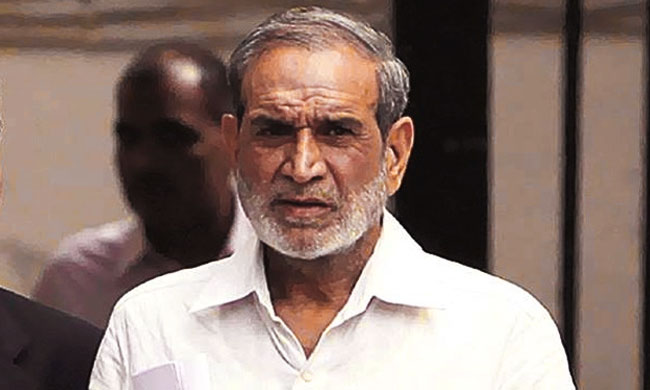 The Delhi High Court has stayed a Trial Court order which had granted bail to former Congress leader Sajjan Kumar in connection with a case of rioting and murder of a man and his son residing in West Delhi area during the 1984 Anti-Sikh Riots.

Charges against Kumar were framed in the case in December last year and the trial is ongoing. However, Kumar is already serving life sentence in another case relating to the said riots.

While staying the Trial Court order, Justice Yogesh Khanna on June 4 also issued notice on the plea filed by State through SIT constituted for investigating the cases concerning the 1984 riots.

­"In view of the above, let the notice of this petition be issued to the respondent through all modes returnable on 15.07.2022 and till then the impugned order dated 27.04.2022 shall remain stayed," the Court ordered.

It was argued by the State that Kumar is involved in a heinous offence and some important witnesses were yet to examined. It was added that in case he is released, it may result in the evidence being hampered.

It was further submitted Kumar was already convicted in a similar matter and is in custody therein.

The matter will now be heard on July 15.

In the present case, the complainant had stated that on November 1, 1984 a mob had attacked on their house resulting in the killing of her husband and son, inflicting injuries on her and other persons, including damage and destruction of their property.

The complainant further stated that she saw a photo of Kumar in a magazine later and identified him to be the one instigating the mob.

Thereafter Ministry of Home Affairs vide its order dated 12.02.2015 constituted a SIT for investigating or re­investigating the cases concerning the 1984 riots. The complainant's statement was recorded wherein she again narrated the incident.

Further investigation in the matter revealed that the victims, sister­-in­-law of the complainant along with both the deceased were present at the house when a violent mob consisting of thousands of persons and armed with iron rods and lathis etc. had attacked their house, broken its doors and windows, looted household articles and committed mischief by fire or otherwise by destroying their household articles and by setting their house on fire.

It was also alleged that Kumar, by leading and being a member of an unlawful assembly consisting of thousands of persons and armed with deadly weapons had committed the offences of rioting, dacoity, murder, attempt to murder, causing grievous hurt and mischief by fire or otherwise by destruction of house and other household property of the victims.

The Court was of the view that there was sufficient material on record to form a prima facie opinion that Kumar was not only a participant of mob that attacked the house of the deceased, but was also leading it. The Court however dropped the charges under sec. 201 (Causing disappearance of evidence of offence, or giving false information to screen offender) and 307 (Attempt to murder) of the IPC.