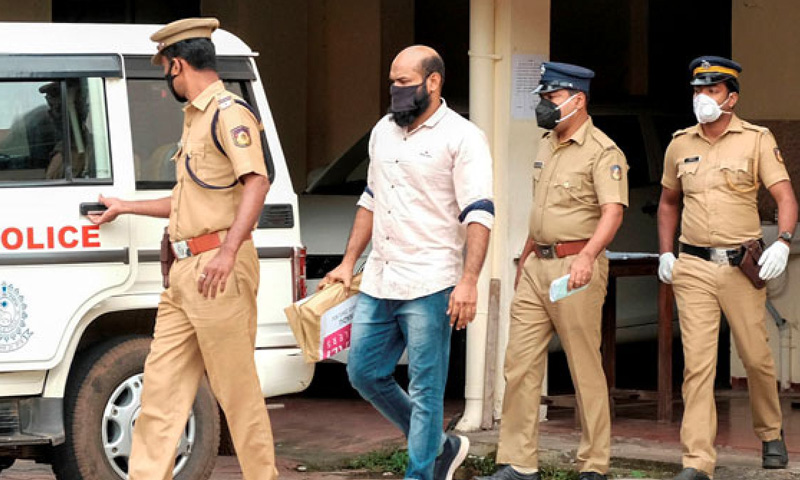 A Special NIA Court at Ernakulam on Monday convicted ISIS terrorist Subahani Haja Mohideen and sentenced him to life imprisonment, in connection with the ISIS Omar Al-Hindi module case. Mohideen, a 35-yr-old resident of Tirunelveli district in Tamil Nadu was arrested by the NIA in October 2016, subsequent to seizure of incriminating materials from his residence, including...

A Special NIA Court at Ernakulam on Monday convicted ISIS terrorist Subahani Haja Mohideen and sentenced him to life imprisonment, in connection with the ISIS Omar Al-Hindi module case.

Mohideen, a 35-yr-old resident of Tirunelveli district in Tamil Nadu was arrested by the NIA in October 2016, subsequent to seizure of incriminating materials from his residence, including material indicating his links with the proscribed terrorist organization ISIS.

"The act of the convict is a blot on the cultural conscience of this State. It is also a blow to its pride as one of the most progressive societies in the nation. It is a painful realisation that youthful people are indoctrinated by such extremist ideologies and they are even prepared to renounce the eternal tie with their mother country, seemingly on their wishful thought that they could embrace their own paradise in that attempt".said Special Judge P. Krishna Kumar in his Judgemnt.

Holding that the prosecution had proved its case "beyond reasonable doubt", Special Judge P. Krishna Kumar sentenced him to life imprisonment and imposed a fine of Rs. 2,10,000 for the following offences:

Section 20: Punishment for being member of terrorist gang or organisation

Section 38: Offence relating to membership of a terrorist organisation

Section 39: Offence relating to support given to a terrorist organisation

The Court has largely relied on the testimony of JS Mohamed Kamal, co-accused turned approver in this case.

Allegedly, Mohideen had confessed to Kamal that he had migrated to/ joined ISIS and was fighting for it in the battle field of Mosul.

Whereas Kamal's testimony was vehemently disputed by the Defence, the Court recorded its satisfaction over his statements.

The Court acknowledged that extra judicial confessions made to an approver are ordinarily a "weakest piece of evidence". However, it held that the same may be relied upon if there are "undeniable corroborative evidence of sterling quality".

In the case at hand, the Court noted that none of the aspects brought out in the cross examination of the approver was capable of challenging the intrinsic worth of the evidence.

"When considering the impact of these matters on his version in chief examination, I find no material which is sufficient to discredit the witness. First of all, the witness never deviated from his previous version recorded by the learned Magistrate under section 164 of Cr.PC. He was questioned by the NIA soon after the arrest of the accused and the defence side did not elicit any contradiction in his version. Significantly, most part of the version he has spoken to is supported by electronic evidence or other proved circumstances," the Bench observed.

On 3rd October, 2016, searches were conducted at Mohideen's house in Tamil Nadu, which led to seizure of incriminating material indicating his travel to the 'theatre of conflict' in West Asia. Forensic examination of the clothes used by him during his stay with the Islamic State and the forensic medical examination of his body established that he was in the war zone in Iraq. It was also established that after returning to India in September 2015, he had attempted to procure explosive chemicals, based on instructions from his handlers in the Islamic State, to carry out terrorist attacks in India.

Investigation also revealed that Moideen had exited India from Chennai and reached Turkey on 8th April, 2015. He had then illegally crossed over to Iraq through land border and joined the Islamic State using kunya name Abu Jasmine Al-Hindi. After undergoing religious and arms training with ISIS/ Daish in Iraq, he was deployed with ISIS' military formation Umar lbnu Khatab Khatiba.

Moideen was also associated with Pakistani national Mohammed Usman Ghani, who is now incarcerated in France, for his involvement in 13/11 Paris attacks of 2015.

"The insolent boldness shown by the convict to plan meticulously his journey to ISIS and to execute it with perfection, his temerity to come back to India without being caught by any authorities and his commitment to pursue the offensive objects he cherished, make this court very cautions and to be society centric, while fixing the quantum of punishment. It being the sovereign function, rather the solemn duty, of a criminal court to adequately insulate the society from the menace of terrorism and the aggravated forms of crimes, individual interest of the convict cannot be given undue privilege. Thus, a message of deterrence, as well as a solid measure for the safety of the society, has to be infused into the sentence", said the Court