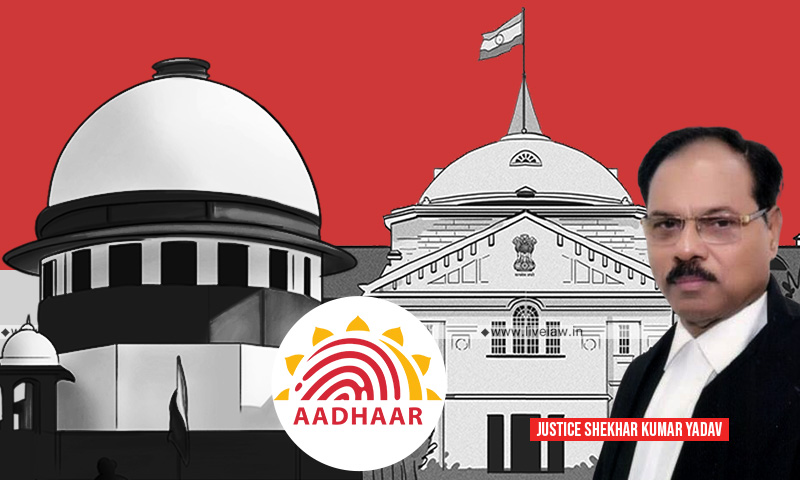 While denying bail to 4 persons accused of fraudulently withdrawing money from the bank account of a retired High Court Judge, the Allahabad High Court today expressed its agreement with a submission made by the Union Government regarding the filing of a review petition against the Supreme Court's 2018 Adhaar Verdict before the SC.In its 2018 Verdict, the Supreme Court had ruled that...

While denying bail to 4 persons accused of fraudulently withdrawing money from the bank account of a retired High Court Judge, the Allahabad High Court today expressed its agreement with a submission made by the Union Government regarding the filing of a review petition against the Supreme Court's 2018 Adhaar Verdict before the SC.

In its 2018 Verdict, the Supreme Court had ruled that the move of mandatory linking of Aadhaar with bank account does not satisfy the test of proportionality.

Essentially, the Bench of Justice Shekhar Kumar Yadav was hearing the submissions of RBI, State Government, BSNL, and Union government regarding the measures that could be taken to tackle cyber frauds/cyber crimes/fraudulent withdrawal of money from banks.

These submissions were being made pursuant to the earlier order of court wherein it had observed that it was necessary to fix the accountability in cybercrime matters so that the money of the people, who have been victims of cyber fraud, is not lost.

In this regard, the Court had earlier sought the response of the Union, State & Reserve Bank of India on the question as to how to make Banks & Police accountable in online/cyber fraud cases.

The submissions made by RBI, State Government and BSNL could be read here: People Depositing Money In Banks Are 'Honest'; Banks Have To Take Responsibility For Cyber Crimes: Allahabad HC
Submissions made by the UOI and Court's 'Agreement' to the same

As far as submissions made by the UOI is concerned, appearing before the Court, the Union of India submitted that the entire case of fraudulent withdrawal of bank customers is related to the Reserve Bank and only they are responsible to deal with such matters.

It was further suggested by the counsel appearing for UOI, S. P. Singh that the banks can keep an eye on the account of all the customers through the Aadhar card-bank linking, however, however, he added that Supreme Court has abolished the mandatory linking of the Aadhar cards with bank accounts.

Essentially, the Counsel for the UOI was referring to the 2018 decision of the Supreme Court in the case of Justice K. S. Puttaswamy (Retd.) and Anr. vs Union Of India And Ors. [Puttaswamy (Aadhaar-5J.) v Union of India], wherein the Court had read down some of the provisions of the Aadhaar (Targeted Delivery of Financial and Other Subsidies, Benefits and Services) Act 2016, and struck down a few but significant ones (mainly Section 33(2), 47 and 57), and upheld the rest.

Before the Allahabad High Court, the UOI of India, referring to Justice K. S. Puttaswamy (Retd.) Judgment said that since condition imposed by the Centre of Adhaar-Bank account mandatory linking had been held to be bad in law, therefore, it was not possible for the banks to press for mandatory linking of adhaar cards with bank accounts.

Significantly, in response to this, the Court expressed its agreement with a further argument made by the Union of India to file a review petition against the Supreme Court's 2018 Adhaar Verdict

"The court agrees with the contention of Shri S. P. Singh that he should file a review petition in the Supreme Court regarding the mandatory linking of the Aadhar card so that (as Counsel Singh argued) the Aadhar card could be linked with the bank account holders and online bank fraud can be prevented," the Court said.

It is important to note that in June 2021, the Supreme Court, by 4:1 majority, had dismissed a batch of review petitions challenging the judgment of the Constitution Bench in the Aadhaar case [Puttaswamy (Aadhaar-5J.) v Union of India].

While Justices AM Khanwilkar, Ashok Bhushan, S. Abdul Nazeer and BR Gavai observed that no case for review of judgment, Justice DY Chandrachud expressed his dissent. The review petitions were not heard in open court, but 'by circulation'.

Other important observations of Justice Yadav

The Bench of Justice Shekhar Yadav also observed that those people who do not deposit crores of rupees in the bank and rather hide the same in the basements of their houses, are responsible for hollowing out the economic prosperity of the country.

Opining that the bank has to take responsibility for such cases wherein the money of their customers is withdrawn by cybercriminals as such customers are more honest towards the country since they put their white money in banks.

"Bank account holders' money should be safe. Not only because the customer deposits money in the bank so that he/she can withdraw it when needed, but also because the money deposited by the customers in the bank is white and due to which, the economic condition of the country also improves. On the other hand, there are people in the country who do not deposit crores of rupees in the bank and keep it hidden in the basements of their houses. The banks do not get any benefit from it, and they also hollow out the economic condition of the country. In such a situation, that customer of the bank is more honest towards the country and his money should be kept safe by the bank at all costs and if in any way the money is withdrawn by cybercriminals, then for this, the bank has to take responsibility for it," the Court opined.

The Court was dealing with the bail plea of 4 accused in connection with a case, wherein money was fraudulently withdrawn from the bank account of a Judge (retired), High Court.

Essentially, 5 lacs rupees was withdrawn from the account of retired HC Judge Justice Poonam Srivastava. the matter was probed and 3 accused were arrested from Jamtara in Jharkhand. Thereafter, they moved the court by way of filing bail pleas and opposed the charges against them.

In June 2021, during the course of the hearing of this matter, the Allahabad High Court had observed that the police authorities are not making serious efforts in controlling these types of fraudulent activities.

Again in August 2021, expressing concerns over the spreading nationwide network of cyber thugs, the Allahabad High Court had observed that cyber thugs are eating up the entire country like termites and are responsible for the weakening of the economic condition in the country.