[Acid Attack] Wife's Repeated Refusal To Return With Her Husband Is A Mitigating Factor At The Time Of Sentencing: Tripura HC [Read Judgment] 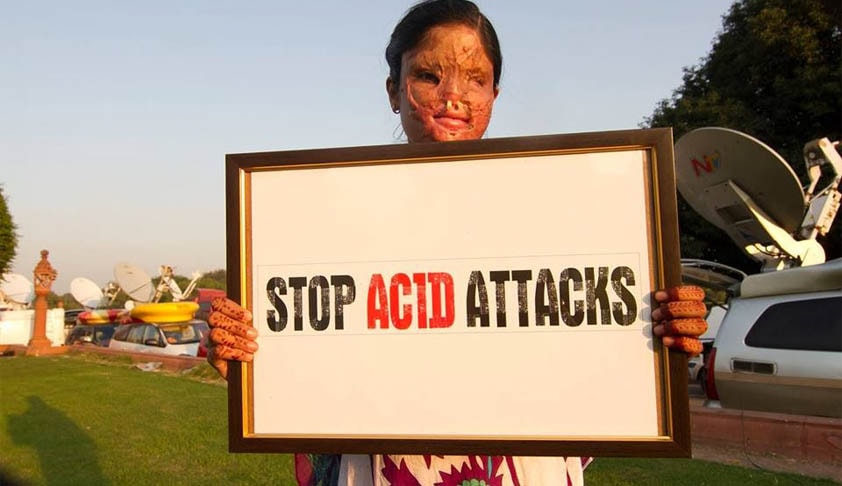 The Tripura High Court on Monday reduced the sentence of a man, convicted for throwing acid on his wife, while holding that his frustration, caused due to the wife's refusal to return with him to their matrimonial house, was a mitigating factor. "…After their separation, the appellant met his victim wife several times at her parental home to take her back to his home but she refused...

The Tripura High Court on Monday reduced the sentence of a man, convicted for throwing acid on his wife, while holding that his frustration, caused due to the wife's refusal to return with him to their matrimonial house, was a mitigating factor.

"…After their separation, the appellant met his victim wife several times at her parental home to take her back to his home but she refused to go back to her matrimonial home…This circumstance indicates that the appellant desired to restore his matrimonial relationship with his wife but his reluctant wife was not willing to reunite with him which might have caused a sense of frustration in the appellant. We cannot overlook this mitigating circumstance while deciding about the proportionality of the sentence to be awarded to the appellant for the crime committed by him," the comprised of Justice S. Talapatra and Justice SG Chattopadhyay observed.

Holding thus, the bench reduced the sentence of the appellant convict to the minimum sentence provided under Section 326A (Voluntarily causing grievous hurt by use of acid, etc.) of IPC, i.e. rigorous imprisonment for 10 years, from the maximums sentence imposed by the Trial Court, i.e. imprisonment for life.

The bench was hearing an appeal preferred by the convict against his conviction under Sections 326A and 498A (husband or relative of husband of a woman subjecting her to cruelty) of IPC.

On an analysis of the evidence of prosecution witnesses, both related witnesses as well as formal witnesses, the Court held,

"it appears to us that it is quite difficult to ignore their cogent, consistent, coherent and persuasive evidence as regards the act of the appellant of throwing acid on the victim. With regard to the acid attack on her by her appellant husband on the fateful day, the victim has given a very consistent evidence which is absolutely trustworthy and reliable."

On the question of sentencing, the bench relied on various precedents laid down by the Apex Court that emphasize on the need to strike "proportionality between the crime and punishment".

The bench recognized that even though Trial courts exercise wide discretion in respect of awarding sentence within the statutory limits, there is no "structured guidelines" in respect of sentencing.

Another problem, the bench observed, is that the reliable materials with regard to the educational, professional and social back ground of the offender, information about his home life, his adjustment capability, his emotional and mental condition, the status of his health, the prospect of his rehabilitation and possibility of his return to normal life are hardly presented before the trial judges at the time of hearing on sentence to help him to take a correct decision in respect of sentence.

"undue sympathy to impose inadequate sentence would do more harm to the justice system to undermine the public confidence in the efficacy of law. It is the duty of every court to award proper sentence having regard to the nature of the offence and the manner in which it was executed or committed. The Courts must not only keep in view the rights of the victim of the crime but also the society at large while considering the imposition of appropriate punishment."

So far as conviction under Section 498A is concerned, the Court held that the prosecution could not establish the charge of cruelty. It noted that other than the omnibus statements of the victim and her parents, there was no other evidence in support of the charge of Section 498A IPC against the appellant.

Further the bench observed that even their statements were not "coherent" and "persuasive" and in fact, they suffered from material inconsistencies.

"It surfaces from their statements that the victim and the appellant did not have a congenial conjugal life which resulted in their separation within few months of their marriage. But this much of evidence is not enough to bring home the charge of Section 498A IPC to the appellant…

Petty quarrels arising out of such discord and differences in conjugal life would not amount to cruelty within the meaning of clause (a) of Section 498A IPC unless it is proved that the cruelty meted out to the wife was a willful conduct of the appellant which was likely to affect her normal mental frame and drive her to commit suicide out of depression or to cause grave injury or danger to her life, limb or her mental or physical health."

The Court clarified that admittedly, matrimonial cruelty occurs within the precincts of the matrimonial home of the wife and she hardly shares her ordeals with someone other than her parents and her near relatives. As a result, overwhelming evidence may not be available before the court in a case under Section 498A IPC. "But that does not absolve the prosecution from the burden of proving the charge by cogent, coherent and persuasive evidence," the bench remarked.

It therefore set aside conviction under Section 498A IPC.