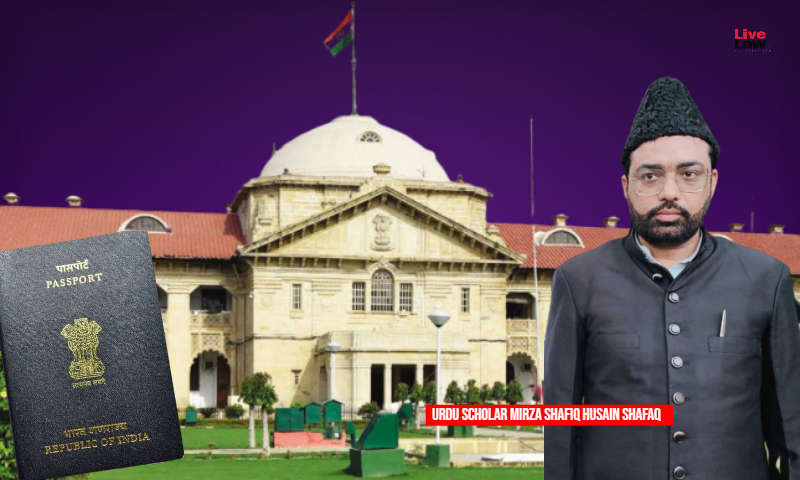 The Allahabad High Court last week ordered the deletion of an interim bail condition imposed on an Urdu scholar Mirza Shafiq Husain Shafaq in connection with a matrimonial dispute regarding the deposit of his passport before the S.S.P/S.P concerned.

Calling the bail condition 'onerous', the Bench of Justice Siddharth emphasized upon the fundamental right to travel abroad as it referred to the Punjab and Haryana High Court's decision in the case of Capt. Anila Bhatia vs State Of Haryana. Further, the Court ordered that the condition of the surrender of the passport be deleted.

It may be noted that in Capt. Anila Bhatia case, the Court had made significant remarks regarding impounding of passport as bail condition. The Court has observed thus::

"But the criminal courts have to take extreme care in imposing such condition. It cannot mechanically, and in every case where an accused has a passport impose a condition for its surrender. Law presumes an accused to be innocent till he is declared guilty. As a presumably innocent person he is entitled to all the fundamental rights guaranteed to him under the Constitution...The criminal court has to consider possibility of the accused if released on bail, fleeing justice and thereby thwarting the course of justice which affects the majesty of the law, as also the individual rights of the accused...The court has to decide whether, notwithstanding the personal liberty of the accused, interest of justice required that his right of movement should be restricted during the pendency of the case by directing him to surrender his passport."

Against this backdrop, the Court took note of the arguments of the counsel for the applicant no. 1 (Urdu scholar Mirza Shafiq Husain Shafaq) and material brought on record and thereafter, allowed the application and deleted the condition of depositing the passport.

"The authority with whom the applicant no. 1 has deposited his passport shall release the same provided applicant no. 1 moves an application supported by his affidavit along with proof that he is still required to go abroad on some future date and in case passport is released in his favour he will not misuse the liberty granted to him and will appear before the trial court as and when required," the Court further added.

It may be noted that the applicant had moved the court with his Criminal Misc. Modification Application praying for modification of condition no. 3 of HC's January 2021 order of surrendering passport.

He had stated that he is a lecturer in a Govt College and also a renowned Urdu scholar/writer and orator attending National and International Level Seminars. He is also a writer and translator of several books and he had an invitation for releasing a book in Kuwait, for which he had to travel aborad.

Therefore, he sought exemption from depositing the passport and also sought a further direction to the authority concerned to release his passport deposited in pursuance of the HC's order while granting him interim bail in connection with a matrimonial dispute.

Case title - Mirza Shafiq Hussain Shafaq And Another v. State Of U.P And Another [CRIMINAL MISC ANTICIPATORY BAIL APPLICATION U/S 438 CR.P.C. No. - 142 of 2021]