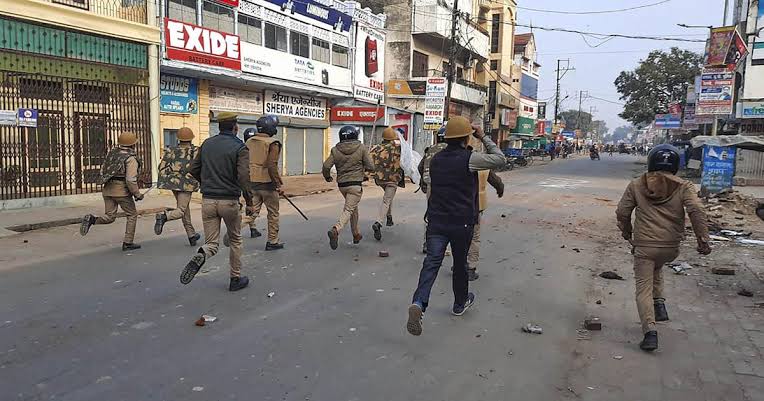 x
Citing pendency of similar case in SC, the HC dismissed the petition
Your free access to Live Law has expired
To read the article, get a premium account.

The Lucknow bench of the Allahabad High Court on Monday dismissed a petition challenging notices issued by the District Administration of State of Uttar Pradesh to recover damages for alleged loss of public property during the anti-CAA protests.

The division bench of Justice Pankaj Kumar Jaiswal and Justice Karunesh Singh Pawar said that it was not inclined to adjudge a matter that is already pending before the Supreme Court.

The Petitioners had moved the high court for quashing of the impugned show-cause notices. The standing counsel however, argued that,

"similar question is pending before the Apex Court, in which cognizance on the issue has been taken and, therefore, at this stage, the present writ petition is not maintainable before this Court under Article 226 of the Constitution of India."

Taking note of the same, the bench dismissed the petition, while clarifying that if any adverse order is passed against the petitioners, they may challenge the same in appropriate proceedings in accordance with law.

Thereafter, the state govt. of UP issued show cause notices under Sections 3 and 4 of the Prevention of Damage to Public Property Act, 1984 and under Section 7 of the Criminal Law Amendment Act, to those allegedly involved in the protests

These notices came to be challenged before the Supreme Court in a writ petition titled Parwaiz Arif Titu v. State of UP.

Therein, the Petitioner has contended that the recovery notices, that have been issued pursuant to the 2010 verdict of the Allahabad High Court in Mohammad Shujauddin v. State of UP, Writ – A N0.40831/2009, are contrary to the law of the land laid down by the Supreme Court in In Re: Destruction of Public and Private Properties v. Govt. of Appellant, (2009) 5 SCC 212.