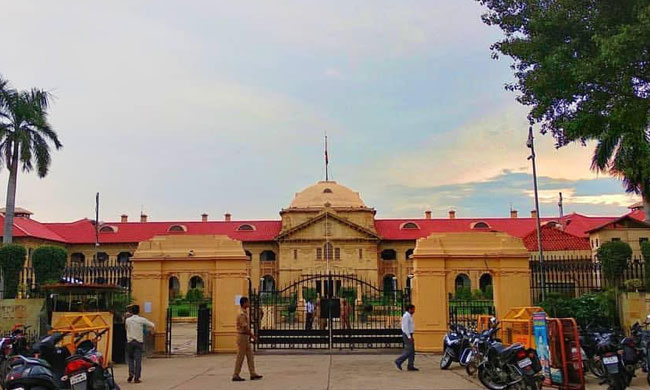 In a significant order passed on Monday, the Allahabad High Court allowed the plea of a wife, to be appointed as the guardian of her husband lying in vegetative state.

The bench comprised by Justices Shashi Kant Gupta and Saurabh Shyam Shamshery observed that even though there is no law for appointment of guardians for a person in a comatose state, the court was obliged in its capacity as a 'parens patriae' to do justice to the Petitioner.

"We cannot lose sight of the fact that we have been called upon to discharge 'parens patriae' jurisdiction. The Court under Article 226 of the Constitution of India can pass orders and given directions as are necessary for subserving the ends of justice when no remedy is provided in any statute in respect to persons lying in comatose condition," the court said.

The court also called upon the Central Government to pass an appropriate legislation on this subject.

The Petitioner had approached the High Court seeking to be appointed as the guardian of her husband to protect his interest, administer bank accounts, investments, proprietorship business, etc. and in the event of necessity, to sell the immovable property standing in the name of her husband and to use the proceeds towards medical treatment of her husband and family welfare expenses.

It was submitted that the Petitioner's husband had been in comatose state for past one and a half years and the Doctors' had advised that he would remain so until his eventual demise.

The Petitioner had thus sought to be appointed as her husband's guardian to be able to cover the expenses of his treatment and nursing care, and that of her two daughters' marriage.

However, it was also admitted that unlike legislations for appointment of guardian for minors and persons with other disabilities or mental illnesses, there is now law to appoint a guardian for a person in coma state.

In fact, such persons do not even fall within the purview of 'person with multiple disabilities' under the National Trust for the Welfare of Persons with Autism, Cerebral Palsy, Mental Retardation, and Multiple Disabilities Act, 1999.

It was submitted that even the RBI guidelines, advising the Banks to accept Guardianship Certificates issued under National Trust Act, 1999 are not applicable in respect of a person lying in a comatose state.

The High Court observed that it could, in exercise of its powers under Article 226 of the Constitution of India, invoke the doctrine of Parens patriae and appoint the Petitioner as a Guardian of her husband.

"In our opinion, in the present case this Court cannot shirk its responsibility when a distress call is given by a sinking family of a person lying in a comatose state for the past year and a half. The dominant factor, after all, is not enforcement of rights guaranteeing protection of life of warring parties under Article 226 of the Constitution but the protection of the rights of a human being lying in a comatose state under Article 21 of the Constitution of India," the court observed.

It relied on the decision of the Kerala High Court in the case of Shobha Gopalakrishnan & Ors. v. State of Kerala & Ors., (2019) SCC Online Ker 739, whereby a division bench appointed the legal heir of the victim as a guardian, recognizing the same to be a "SOS Call" of the victim's "sinking family".

Reliance was also placed on the judgment of the Delhi High Court in the case of Vandana Tyagi v. Government of National Capital Territory of Delhi & Ors., (2020) SCC Online Del 32, which followed the suit.

The division bench thus allowed the writ petition while clarifying that the Petitioner shall not sell, alienate encumber any of the immovable properties of her husband, except with the express permission of the Registrar General of this Court.

The High Court observed that the guidelines framed by the Kerala High Court in the case of Shobha Gopalakrishnan (supra) with regard to appointment of guardian qua a person lying in a comatose state are "formidable".

The bench was of the opinion that the same can be used as "framework" for formulating guidelines that need to be implemented in the State of Uttar Pradesh till such time, the legislative enactments are framed and specific provisions are made.

The High Court thus fixed the following norms/ guidelines as a temporary measure to be followed in the state, till an appropriate enactment is legislated for appointment of guardians vis-a-vis individuals lying in comatose state:

"(i) A person(s) who seek(s) to be appointed as guardians vis-à-vis an individual, who is lying in comatose state, shall in their petition to the High Court (in short 'Court') disclose the details of all tangible and intangible assets of such an individual. The details as to their location and approximate market value shall also be disclosed. In case of bank accounts, stocks, shares, and debentures and other investments are concerned, material particulars will be provided.

(ii) The Court will have the person lying in comatose examined by a duly constituted medical board which would include, inter alia, a neurologist.

(iii) The court will also direct the concerned SDM/Tehsildar in whose jurisdiction the person lying in comatose is said to be located to carry out an enquiry to establish the veracity of the assertion and to gather material particulars concerning the person(s) who approach the court for being appointed as guardians. The enquiry will, inter alia, gather information as regards the relationship that the person(s) who wish to be appointed as guardians has/have with the person lying in comatose state. Information with regard to the financial condition of persons wanting to be appointed as guardians shall also be collected apart from other aspects which may have a material bearing in their discharging the duties of a guardian. Any conflict of interest concerning the affairs of the person lying in comatose state will be brought to fore in the report generated during the course of the enquiry.

(v) Only that person shall be appointed as a guardian who is otherwise in law competent to act as a guardian.

(vi) The order directing appointment of a guardian shall specify the assets qua which the guardianship order is passed. The court will be empowered to modify the order and bring within its sweep other assets, if required, in the interest of the person lying in comatose state. In case liquid funds are not available and there is a requirement to sell the assets of the person lying in comatose state, upon the guardian approaching the court, necessary directions could be passed in that behalf.

(vii) The person appointed as a guardian will file every six (6) months (or within such period as the court may indicate in its order) a report with the Registrar General of this court. The report shall advert to the transactions undertaken by the guardian in respect of the assets of the person lying in comatose state. Besides this, the report shall also indicate the funds, if any, received by the guardian and their utilization for the purposes of maintaining the person lying in comatose state.

(viii) The Registrar General of this court will cause a separate register to be maintained which will set out inter alia the details of the proceedings, the particulars of the person appointed as a guardian and orders, if any, passed after the appointment of the guardian. Measures will also be taken by the Registrar General to preserve the reports filed by the guardian from time to time.

(ix) It will be open to the court to appoint a guardian either temporarily or for a limited period, as may be deemed fit.

(x) In the event, the guardian appointed by the court misuses his/her power or misappropriates, siphons or misutilizes the assets of the person lying in comatose state or fails to utilize the assets in the best interest of the person lying in comatose state, the court would have the power to remove the guardian and appoint another person in his/her place. The substituted person could also be a public officer such as a Social Welfare Officer or an officer holding an equivalent rank.

(xi) The guardian appointed by the court will ensure that the transactions entered into by him or her comport with the relevant provisions of the law.

Before parting, the division bench recommended the Central Government to consider enacting an appropriate legislation pertaining to appointment of guardians qua persons lying in a comatose state, as no remedy is provided in any statute to persons in comatose/ vegetative state, unlike legislations for appointment of guardians for minors and persons with other disabilities, including like mental retardation etc.

"Registry is required to forward a copy of this judgment to the Secretary, Law, Ministry of Law and Justice, Government of India, for information and appropriate steps," the court ordered.