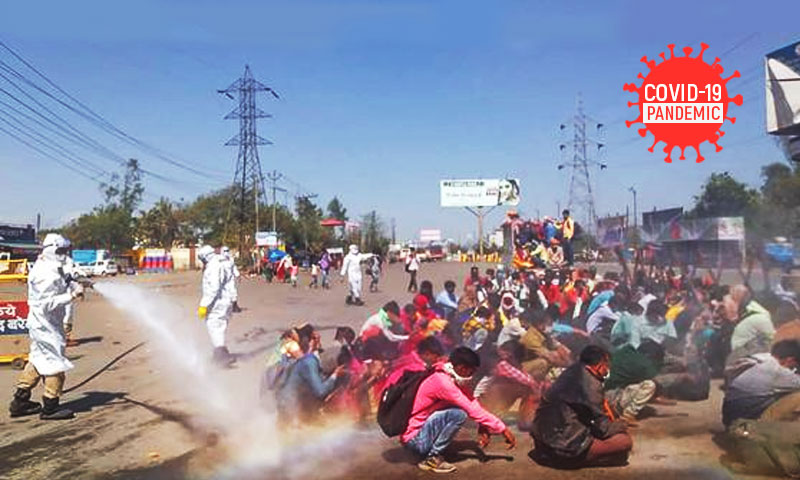 The Allahabad High Court on Tuesday issued notices on a plea alleging that the state Government had been permitting the use of "Sodium Hypochlorite" as a disinfectant on human beings, despite the prohibitory orders issued by the Ministry of Health and Family Welfare, Government of India.

The bench of Justices Anil Kumar and Saurabh Lavania has given a month's time to the State to file its counter affidavit in the matter.

The Directorate General of Health Services under the Union Ministry of Health & Family Welfare had issued an advisory, strongly recommending against spraying of the said chemical compound on individuals or groups.

As per the advisory,

"Spraying of [Sodium hypochlorite] individuals or groups is NOT recommended under any circumstances. Spraying an individual or group with chemical disinfectants is physically and psychologically harmful.

Even if a person is potentially exposed with the COVID-19 virus, spraying the external part of the body does not kill the virus that has entered your body."

The advisory also cautions that adequate measures, like wearing gloves/ eye protection/ face protection, etc. should be adopted while using the disinfectant for cleaning of surfaces.

However, the PIL filed by Advocate Prince Lenin highlights various incidents whereby the disinfectant was sprayed on human beings, in the state of UP.

The plea points out:

"That on 23.03.2020 a person namely Sandeep s/o Kunjal r/o village Alimau, Block Hathgaam, District Fatehpur, U.P. who was working as a cleaning staff at Village Panchayat Sirathu Nagar, District Kaushambi, lost his life while spraying disinfectant in order to prevent corona virus, as he was spraying the disinfectant without any proper preventive kit.

That it is relevant to point out that on 29.03.2020 at District Bareli several persons ( Labors) comprising of men, women , old person and young children were subjected to spraying Sodium Hypochlorite in the name of killing corona virus which might be present in their body. It is also necessary to point out that the aforesaid inhuman act of spraying Sodium Hypochlorite caused severe panic and ill effects over the body of the men, women, old persons and children.

That again on 05.05.2020 several labors who were coming from other places were subjected to spray of sodium Hypochlorite at Charbagh Lucknow."

In this backdrop, the Petitioner appearing in person has prayed that the state Government be directed to refrain from use of the disinfectant on human beings.

The Petitioner has prayed:

"(I) Issue a writ, order or command in the nature of Mandamus thereby directing the opposite party no.1 to ensure compliance of the advisory issued by the Ministry of Health and Family Welfare, Government of India, regarding prohibition of spray of Sodium Hypochlorite on human beings.

(II) Issue a writ, order or command in the nature of Mandamus thereby directing the opposite party no.1 to issue a direction to all the authorities within the State of U.P. to prohibit spray of sodium Hypochlorite on human beings or any other living being."

After hearing Additional Chief Standing Counsel SP Srivastava and Advocate SS Chauhan on behalf of the State who denied the allegations as "wholly misconceived and wrong," the court has granted time to the State to file its reply.