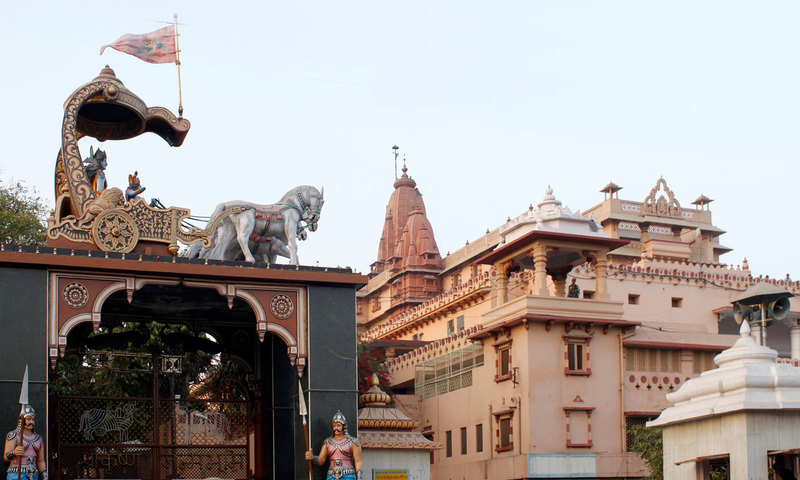 The Allahabad High Court recently restored a plea filed by a Lawyer, Mahek Maheshwari, seeking recognition of Mathura's Shahi Idgah Mosque site as Krishna Janam Bhoomi. This plea was earlier dismissed in default on January 19, 2021, on account of absence of the petitioner, who appears in person in the matter.The Bench of Chief Justice Rajesh Bindal and Justice Prakash Padia restored the plea...

The Allahabad High Court recently restored a plea filed by a Lawyer, Mahek Maheshwari, seeking recognition of Mathura's Shahi Idgah Mosque site as Krishna Janam Bhoomi. This plea was earlier dismissed in default on January 19, 2021, on account of absence of the petitioner, who appears in person in the matter.

The Bench of Chief Justice Rajesh Bindal and Justice Prakash Padia restored the plea as it noted that the application for restoration was filed immediately after it was dismissed in default.

"For the reasons stated in the application, the same is allowed. Order dated January 19, 2021, dismissing the main petition in default is recalled. The main petition is restored to its original number," the Court's order read.

The background of the plea

It may be noted that the instant writ petition has been filed in the High Court seeking removal of Mathura's Shahi Idgah Mosque, allegedly built on Krishna Janmabhoomi. The petition filed by Advocate Maheshwari further prays that the temple land should be handed over to the Hindus and a proper trust for Krishna Janmabhoomi Janmasthan be formed, for building a temple on the said land.

In the interim, the plea seeks permission for Hindus to worship at the Masjid on certain days in a week and on Janmasthmi days, till the disposal of the petition.

The plea submits that Lord Krishna was born in karagar of King Kans and the place of his birth lies beneath the present structure raised by the Shahi Idgah Trust. It is stated that in 1968, the Society Shree Krishna Janamasthan Seva Sangh entered into a compromise with the Committee of Management of Trust Masjid Idgah, conceding a considerable portion of property belonging to the deity to the latter.

Disputing the legality of this compromise, the Petitioner has submitted:

"The committee of Management of Trust Masjid Idgah entered into illegal compromise on 12.10.1968 (Twelve Ten Nineteen Sixty-Eight) with the Society Shree Krishna Janamasthan Seva Sangh and both have played fraud upon the Court, the plaintiff Deities and devotees with a view to capture and grab the property in question. In fact Shree Krishna Janmbhoomi Trust is non-functional since 1958."

He added, "even on the Government official website of Mathura District it is stated that Shahi idgah mosque is built after the demolition of Krishna Janmabhoomi by Aurangzeb." He has further claimed that the existence of Carved pillars & Antiquities below the courtyard of the Shahi Idgah Mosque was reported by certain workers.

In this backdrop, a prayer is made for Court-monitored GPRS-based excavation by the Archaeological Survey of India (ASI) of the disputed structure, allegedly built over Krishna Janma sthan.

It is contended that Masjid is not an essential part of lslam and hence, the disputed land should be handed over to the Hindus for the exercise of their right to freely profess, practice, and propagate religion under Article 25 of the Constitution.

The plea also urges the court to strike down Sections 2,3, 4 of the Places of Worship Act, 1991, as unconstitutional. It is stated that the impugned provisions abolish the pending suit/ proceedings in which cause of action had arisen prior to August 15, 1947, and thus, the remedy available to the aggrieved person through Court has been denied.

"That the above-mentioned sections of places of worship Act 1991 are violative of article 14, 25 & 26 of Constitution of India. As these provisions are arbitrary, denies justice so to be declared Unconstitutional," the plea states.

It is also submitted that provisions violate the doctrine of Hindu law that Temple property is never lost even if enjoyed by strangers for years and even the king cannot take away property as a deity is the embodiment of God and is juristic person, represents 'Infinite- the timeless' and cannot be confined by the boundaries of time.

Case title - Mehek Maheshwari v. Union of India and others